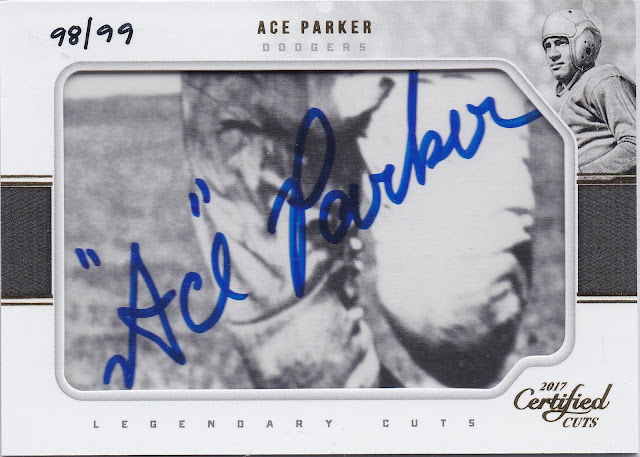 Background-
Parker appeared for the Durham Bulls as a player/manager starting in 1949.  His work with the Durham Bulls was sort of a second career, or maybe a third depending on how you are counting his previous work.  Parker's athletic career at Duke University was a huge success.  He played football, baseball, and basketball while he was in college.  Ace Parker's best sport was football.  In 1935 he was an All-American running back and was a consensus winner for that prestigious award in 1936.  Parker also finished 6th that year in the Heisman voting. 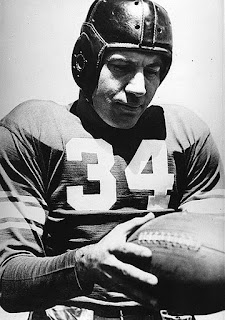 Parker ended up playing two sports professionally.  In 1937 he signed with the Philadelphia A's who literally played him all over the field.  He played all of the infield spots, save for 1B, and also played in the outfield.  He last appeared in the Majors in 1938, but played in the Minors until 1941 before taking a break.  Ace had a .179 batting average after playing parts of two seasons with the A's.

Meanwhile, Parker also started playing in the NFL in 1937 after he was drafted by the Brooklyn Dodgers.  The only other quarterback drafted ahead of Parker was Sammy Baugh.  In 1938, he was an All-Pro selection and lead the NFL in passing.  By 1940, he was one of the premier players in the league and was awarded the MVP Award.  Parker left the NFL in 1942 for the war.  He did play when he returned, but never attained the same level of performance as he did pre-World War 2.

Parker started his managing career with his hometown team, the Portsmouth Cubs, in 1948.  The following season he took over for the Bulls.  He occasionally appeared in games as a player, but mostly managed the team.  Parker's overall record as the manager of the Bulls 303-266 and he took home the Piedmont League Manager of the Year award in 1949 and 1951.  Following the 1952 season he was hired by Duke to coach their baseball team, a job he held until 1966.  Parker's teams won 1 Southern Conference title, 3 ACC titles, and finished 5th in the College World Series in 1961.

Card-
I actually ended up with two Ace Parker autographs.  Not a bad thing, I will give the other card a post of its own at some point.  I have never been big into the "cut signature" cards, but I really liked the look of this card.  Parker not only has a nice signature, he tended to write large.  I am almost sure that this is cut from an autographed football photo of some sort, but I like that the signature takes up the entire card.  The navy blue, or Duke blue color signature is a nice bonus, although the card identifies him as a member of the Brooklyn Dodgers.

I'd give more insight into the Panini Certified brand, but I don't know a thing about football cards and I am not going to pretend that I do.  I generally do not like Panini's baseball products, the whole no-logos thing, but this looks solid.

Posted by The Snorting Bull at 7:00 PM