I am not going to make collecting goal per se, but I am going to go ahead and sketch out a few things that I hope to do with my collection during the next year.  I'd like to think of it as more a change in direction than anything else.  Goals have numbers and quantity, at least in my world view they do, and I do not want to commit myself to those sorts of things.

I made exactly one post on the Topps base set this year and that was back in February.  I did not even open a box of Series 2 or Update.  Pack or two for fun, yes, but that was it for the Topps base set.  I haven't gone out and tried to piece together lots to assemble the set.  I am really not sure I am going to ever finish this year's Topps set. 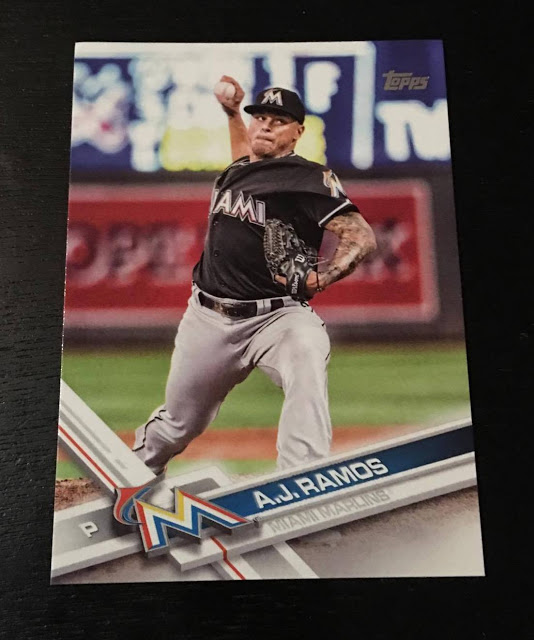 In fact, I feel like I barely touched current year sets during 2017.  I dabbled with Allen & Ginter, a little Topps Heritage, and Stadium Club, but the majority of my efforts, that was spent on sets, went into Minor League products.  Those are also the players that I get to watch in person. 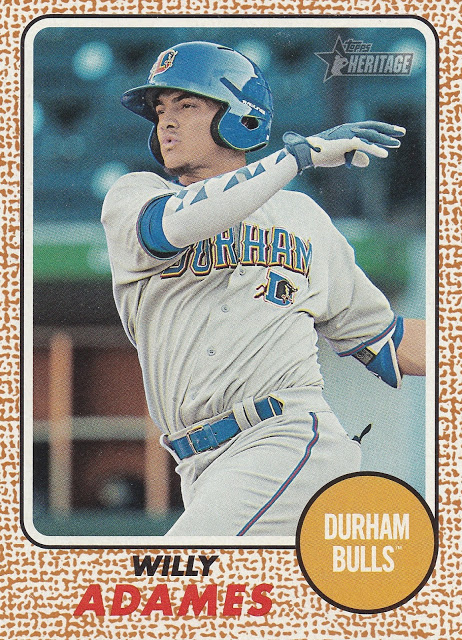 Next year I am not going to touch the Topps set.  I will end up with the Cardinals and Durham Bulls players who have cards in the set, but that's it.  Single cards.  If at some point down the road I end up regretting the decision, it's not like it's really all that hard to find Topps sets, nor are they really expensive to buy as a complete set on Ebay.

I started collecting cards when I was 6 and have put together a Topps set every year for the past 33 years.  It feels a little weird to skip by this set, but times have changed.  My card closet is full, my desire is low, and it's just simply time to move on to other things.

I had a great time this year trying to pick up single cards of different players that I follow, or followed if they are retired.  Opening boxes can be a pricey proposition, especially when my interest in assembling sets has really declined, so I spent a lot of time this year chasing down single cards.  I had a good time doing it and I felt like it was a better use of the time and money that I spent on baseball cards. 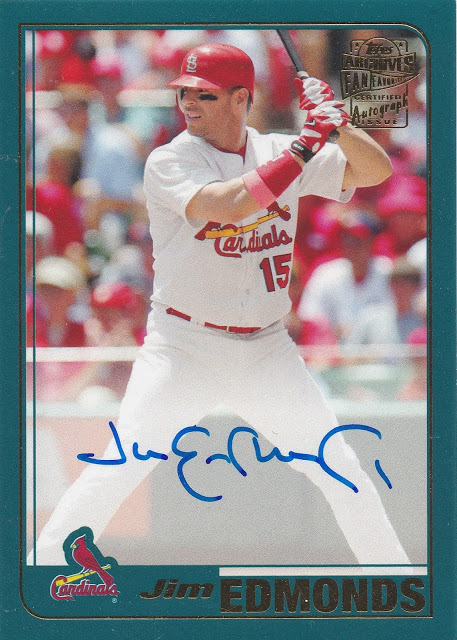 Topps had some really nice former Cardinals players in some of their products, not to mention the usually assortment of current players.  I was really happy with some of the single cards I was able to pick up this year....... 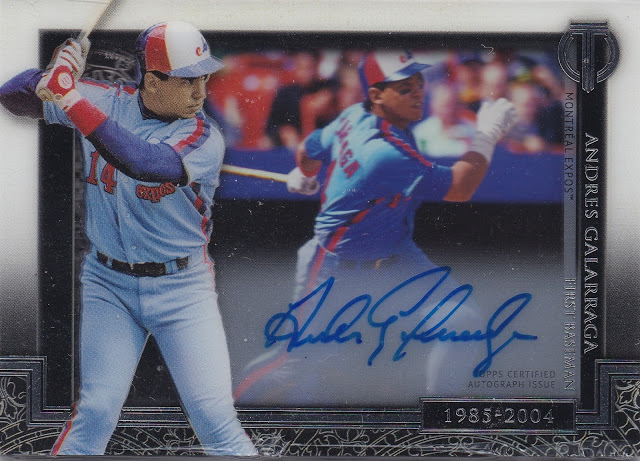 I feel like I did better this year with finding meaningful, nice looking, that were good additions to my collection while I was focused on single cards over trying to assemble sets.  It was a good trade off this year and I see it continuing to be that way into the future.  It's not just autographed cards either, I found plenty of non-autographed cards too.  This was one of my latest.... 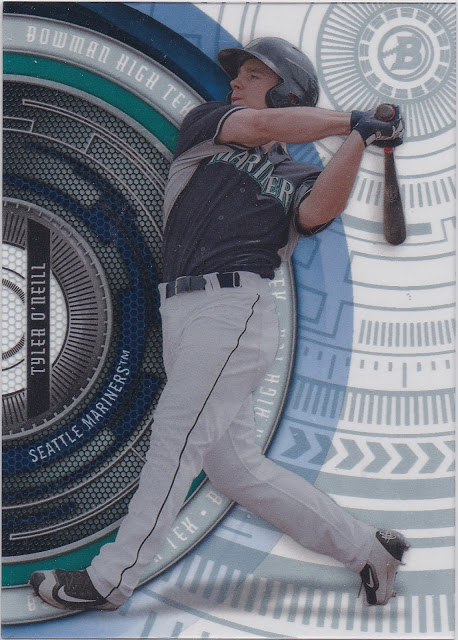 single cards that I added.  While I am not collecting sets, it's still nice to look at the single base Rays/Durham Bulls and Cardinals cards.  Plus, buying/trading for the base single cards off of a Facebook group, Sports Cards lot, and COMC is really cheap and the cards are fun to look at once they show up in the mail.   I have essentially already done the whole single cards thing for the past year, but just never made any sort of announcement or post about the fact that I was bailing on sets.

In the past year and a half I posted very few projects.  I started out really strong, but I sort of fizzled out on that tab at the top of the page.  I recently gave a little update on the state of the projects that are currently up on that page.  One of my completed projects...... 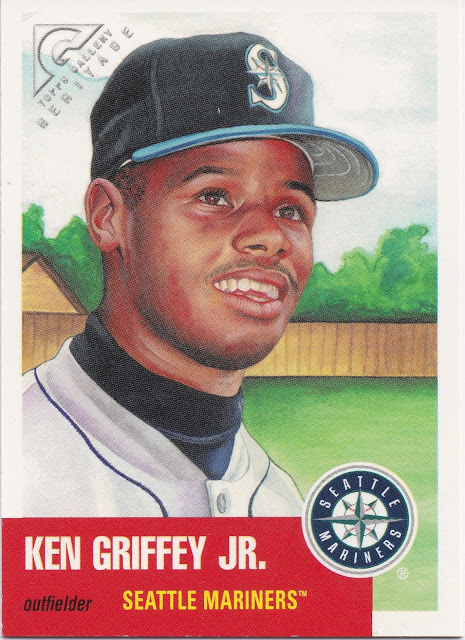 This is actually what I want to do instead of putting together new sets.  I have 30 some years worth of cards, and while there are many sets within that time frame that are complete, there are also many sets in my card closet which are not finished.  I just need to find a good way to make sure that they get updated in posts every once in awhile.  During the past year I have halved my posts from 300 something to 150 something, or three posts a week.  I like that number moving forward, I can probably go a little higher since I have some longer breaks from work at times, but I am never going back to 300 again.  My goal is to do at least two project posts a month.  I know that's a low bar, but it's where I am going at this point.

I have the first project post drafted and ready to roll out next week.

I have been writing a 1990s Cardinals card almost every Monday for the majority of 2016 in my "I Love The 1990s Cardinals" posts.  I believe that I started the posts in the spring.  It narrowed my focus down a little bit, I was just writing 1980s and 1990s cards before in my "Venerable Old Card" posts, but half of those just ended up being Cardinals cards anyway.

There are literally hundreds of these posts I could do about the 1990s Cardinals players, so I should be set for awhile on writing materials.  Plus, it's fun to look back through some of the 1990s sets to pick out the cards.  One of my favorites was finding the Topps TV set which was featured on the Whitey Herzog post..... 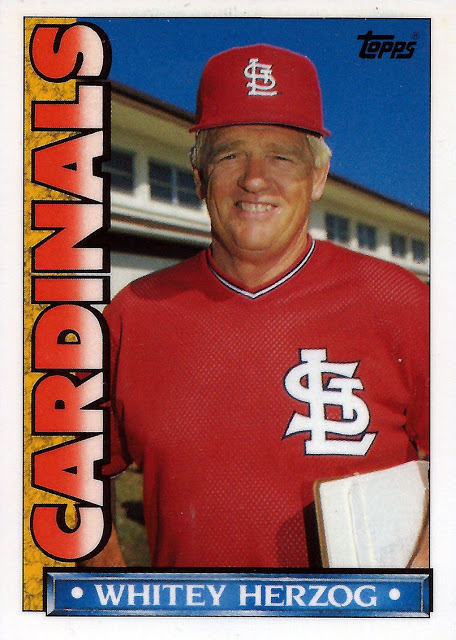 I have some other really nice 1990s Cardinals cards from this set which are going to be coming up in the next few weeks.  This is one of my favorite products that I have revisited with my 1990s Cardinals posts.

I have also enjoyed making my Durham Bulls posts, which are more random in occurrence, but are a nice mix of cards that are currently in my collection and cards that I find looking around on COMC and Ebay.  My favorite card that I have found so far has been my Ace Parker autograph..... 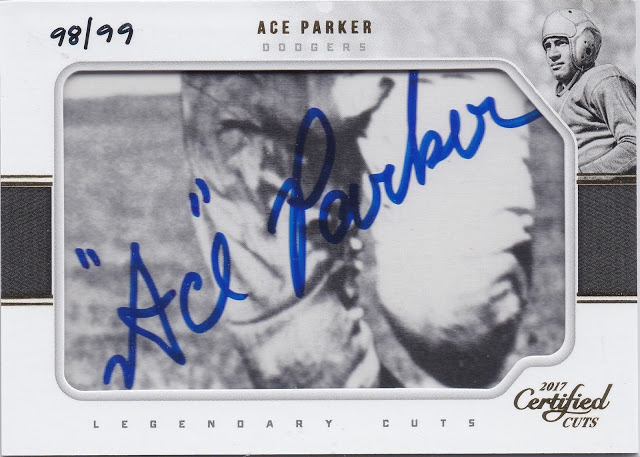 which was one of the bigger names that has appeared for the Durham Bulls.  Since he's not really known for his time playing and managing in professional baseball, he's in the NFL Hall of Fame, it was hard to figure out which football card to add to my collection.  Some of the other cards that are already in my collection are fun to go back and look back on, remember that they are there, and how it ended up in my collection.