There are not many reasons that I stray from baseball cards, but most have to do with collecting cards of some of my favorite athletes from NC State.  I have posted roughly a dozen different basketball cards of former Wolfpack players over the last few years, but I have barely touched football.  I like the football team, but I just haven't found a lot of reasons to spend the time or money to find a card that I want in my collection.
If there is one former NC State player I would want a football card of, it would have to be.....

Unfortunately, Brissett was drafted by the Patriots, who are apparently to football cards what the Yankees are to baseball cards.  When Brissett got drafted, he was the third string quarterback, his card prices were a little bit more than what I was willing to spend on a non-baseball card.
Brady got suspended, Garoppolo got hurt, Brissett played in games.  Card prices didn't come down.  Brissett was on television a bunch before the Super Bowl with Brady's Wolfpack Instagram post and Brissett's Wolfpack shirt. 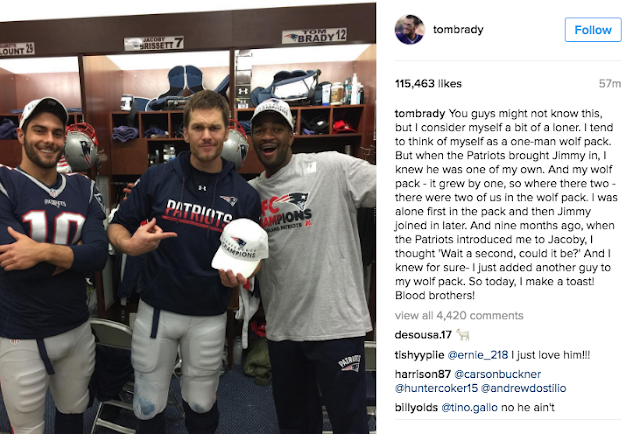 Hope finally arrived at the beginning of the season when the Patriots traded Brissett to the Colts.  Jacoby has played well with the Colts, but apparently they are more in line with the Reds or Brewers comparing NFL and MLB teams.  The prices of Brissett cards, now a starting quarterback, some how became a lot more affordable and........ 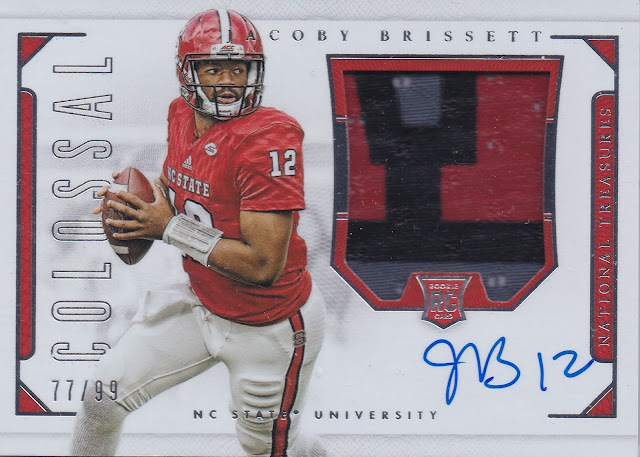 I picked up a Brissett autograph.  I am not a huge fan of Panini, but I do love the fact that they have a license to make NCAA sports cards.  Really nice to see Jacoby in an NC State uniform, instead of a Patriots or Colts.  If I could change one thing about this card it would have to be the jersey swatch.


My Wolfpack usually dabble with alternate uniforms once a year.  I have to admit that many of them have not been very good.  Most Adidas schools fit into that category though. One of the more egregious alternate uniforms were State's "Iron Wolf" entry.

Here's the uniform.  The patch piece on the Brissett card matches this uniform. 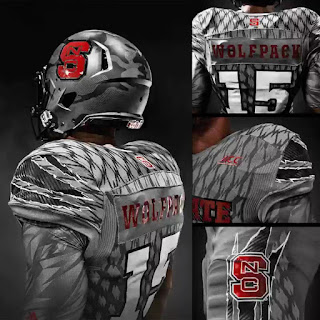 We've got a camouflage helmet with some sort of barbed wire design around the top of the jersey.  I think there are some tear marks or something on the side of the sleeve.  So let's start off with the obvious:  They are really busy uniforms.  There are about three to four different style and design elements happening.  Let's also throw in the fact that NC State is the ag school in the North Carolina and the perceived fan base of the school is, how shall we say, rural.

At least the Pack won the game, while Brissett was in school, when they wore the "Iron Wolf" uniforms.

Posted by The Snorting Bull at 9:02 AM