I get to write about two of my favorite teams in one post.  Tracy Woodson appeared in about 90 games for the Cardinals during the 1992 and 1993 seasons.  In his Major League career, he actually only played in about 200 games over parts of 5 seasons with the Dodgers and Cardinals.  Woodson's best season as a professional player came in 1992 with the Cardinals when he posted a .307/.331/.404 slash line with 1 home run, and 22 RBIs in 31 games.  More importantly, Woodson was on the 1988 Dodgers team that won the World Series.  He took four at bats during the Fall Classic against the A's.
He has a prominent place in the final out dog pile. 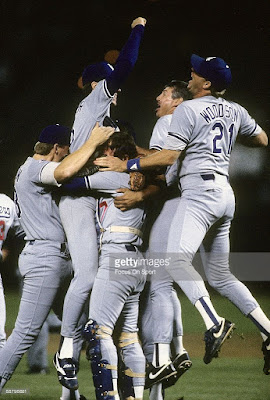 While Woodson's season ended with him being on a World Series winning team, he was also the final out in a perfect game that season against the Reds and pitcher Tom Browning.  He struck out to become the 27th out.

Before Woodson played with the Dodgers and Cardinals he was actually a very good college baseball player at NC State.  In fact, he's in the school's Hall of Fame and was the ACC Player of the Year in 1984.  He's got a plaque and everything....... 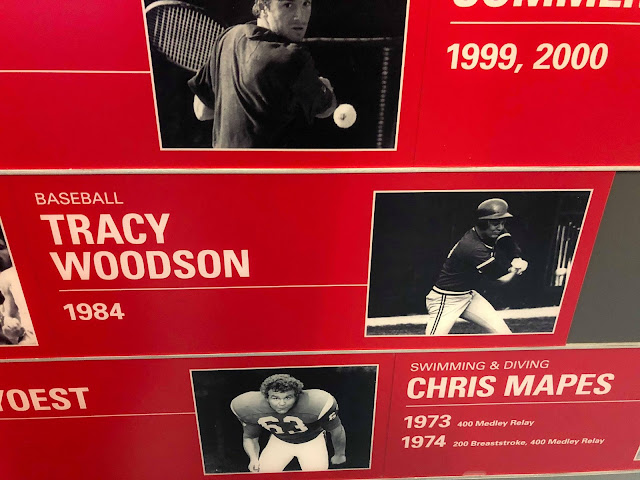 Since retiring from professional baseball Woodson has worked as a Minor League manager and a college baseball coach at Richmond and Valparaiso.  He last worked at Richmond in 2015 and has not coached since.

On to the baseball card portion of our post.  There are not many Woodson cards in a Cardinals uniform, so you are just getting two.  That's all I have. 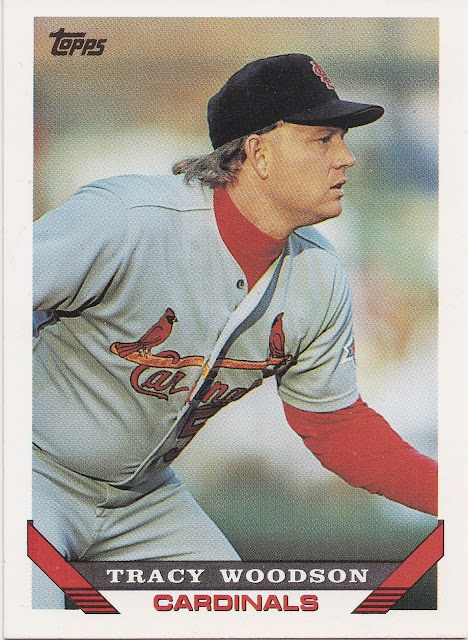 We've got a 1993 Topps card.  Tracy is looking a little out of shape in this picture and he's got a mullet going too.  It's an interesting look.  I got nothing else here. 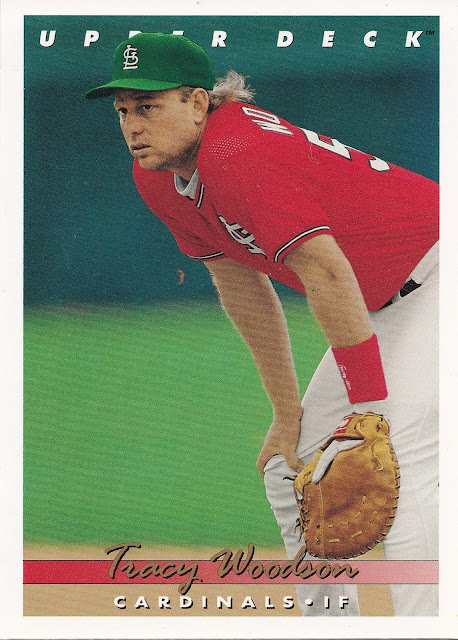 A 1993 Upper Deck, but the card was released late in the year, so the picture is probably from Spring Training that year.  First, the green St. Patty's Day hat is always an awesome look.  Tracy's mullet is looking a little bit longer in this photo too.  The Cardinals had several first base-third base types on their team in 1993 including: Todd Zeile, Rod Brewer, Stan Royer, and Gerald Perry.  The list doesn't include Gregg Jefferies who started at 1B that year for the Cardinals and hit /342/.408/.485.

Woodson is also wearing number 54.  The Dodgers gave him 7 and 21.  Never a great sign that you are sticking around for long when you're a position player with an offensive lineman's uniform number.

Woodson did make it to the end of the year with the Cardinals before they released him.
Posted by The Snorting Bull at 8:54 PM