Ozzie announced his intention to retire early in the 1996 season.  It turned the 1996 into a big farewell tour of sorts for The Wizard.

Meanwhile, Clayton got the majority of playing time for the Cardinals at shortstop.  The team won its first division title since 1987 and the shortstop contributed solid defense and batted lead off for the Cardinals.  Clayton also played well for the team in the Postseason against the Padres and Braves.  He batted over .300 in both the National League Division and Championship Series with 9 hits and scored 5 runs.

Clayton had a decent 1997 season with the Cardinals, played part of the 1998 season for the team, but he was traded halfway through the season to the Rangers, along with Todd Stottlemyre, for Darren Oliver and Fernando Tatis.  Clayton was a free agent to be and the Cardinals seemed ready to move on.  They would end up trading for Edgar Renteria that offseason.

His most important baseball role was actually played after his retirement in the movie Moneyball.  Clayton played the role of A's shortstop Miguel Tejada. 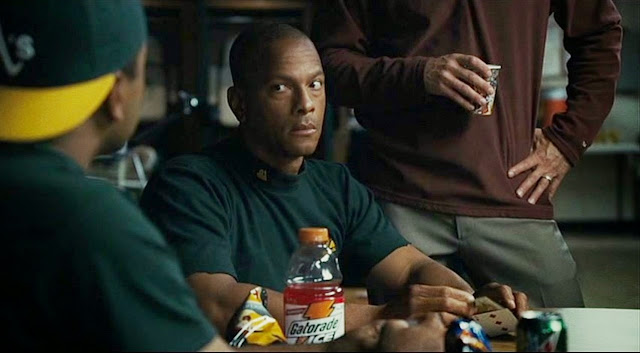 As far as baseball cards go there are some limitations to the number of Clayton cards in a Cardinals uniform.  First, he was only on the team for two and a half years.  Limited time, limited cards.  Second, Clayton was not a star player, and while he replaced a legendary player, card companies did not rush to throw him into a bunch of extra sets.

My favorite Clayton card is his 1997 Topps card.  It's got a nice action shot of him jumping over Giants outfielder Mark Carreon in Candlestick Park.  Over the years, I am only posting my favorite Cardinals Topps card of Clayton, he's actually had some really nice base cards.  Does Topps even put action shots like this in their sets anymore?  Doubtful. 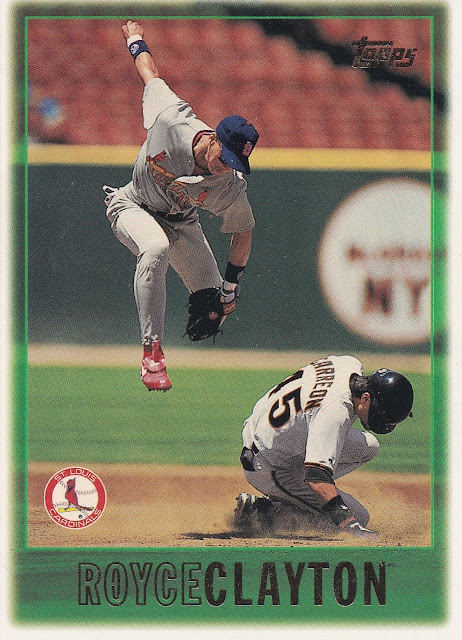 The 1997 Topps set is not their best effort, but as a Cardinals fan the set gets some high marks for player selection.  The Cardinals turned over a lot of their roster in 1996, but since Topps did not have a Traded/Update set that year, most of the new players did not make their base set debut until the 1997 set.  That included Clayton, Ron Gant, Dennis Eckersley, and Andy Benes.  While it's not quite Clayton's first Cardinals card, it's his first in a major base set.

Clayton did make a few really good sets too. 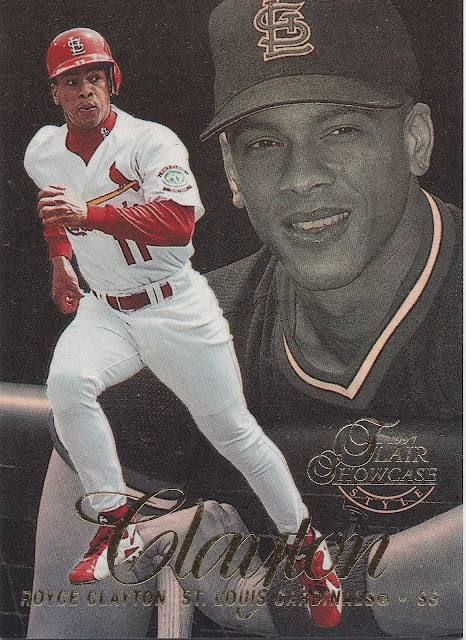 One of my favorites is his 1997 Flair Showcase card.  Definitely a nice product from that era with nice card stock and good finishes on the card.  I like the contrast of the black and white background picture with the color action shot in the front.  I like the white Cardinals uniforms, but I also really enjoyed the blue batting practice jerseys from the late 1990s.  The Cardinals no longer wear them.  In some ways I sort of wish the color and black and white pictures were switched around.

Posted by The Snorting Bull at 5:35 PM