Lonnie Maclin played twelve games for the Cardinals in 1993.  That's it.  When I started these posts about the 1990s Cardinals a few months ago I mapped out about a dozen posts and I pulled a handful of other random cards of different players for future posts.  I wanted a mixture of known names and unknown names.  The known names are nice, good reminders of past favorites, but sometimes the unknowns have some cool stories.

I actually picked out a Maclin card from a stack when I first started this set of posts as part of my random stack for the future.  Maclin is a St. Louis native, so I thought there might be something interesting about his career.  The card happens to be his only major brand baseball card, which is out of the 1994 Pinnacle set. 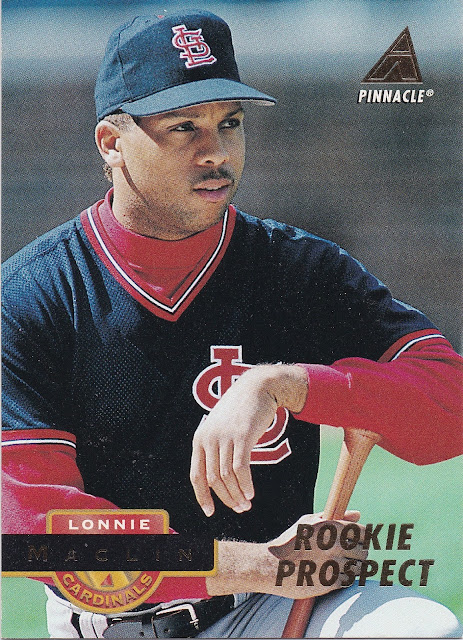 So, I started back tracking a bit on Maclin's career.  First, he attended Ritenour High School in St. Louis County.  It's in the northern part of the county and actually has a pretty good baseball history.  The school has produced three Major League players outside of Lonnie Maclin.  Long time Dodgers pitcher Jerry Reuss, Mets/Giants/Expos infielder Ron Hunt, and Cubs catcher Bob Scheffing.

Maclin played college baseball at Meramec Community College which is in Kirkwood.  It's a few miles southwest of St. Louis and also has a pretty successful track record with its baseball team.  Notable alumni include David Freese, T.J. Mathews, Brian Boehringer, and Donnie Wall.

The Cardinals drafted him in 1987 out of junior college.  He played well in the lower Minors.  Maclin didn't move as fast up the Minor League ladder as Ray Lankford and Bernard Gilkey, but he was in that batch of prospects.  He played alongside future Cardinals like Luis Alicea, Brian Jordan, Geronimo Pena, and Rheal Cormier.

Which is how I found a second card of Maclin. 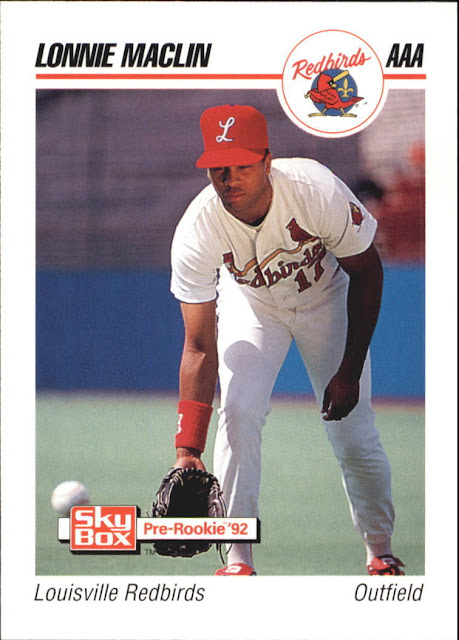 I had actually picked up a bunch of these early 1990s Minor League sets trying to find some extra cards of some of the 1990s Cardinals players.  Maclin actually has a few Minor League cards, just kind of liked this one.

Maclin made his Major League debut with the Cardinals on the night of September 7, 1993.  What happened that night?  Just Mark Whiten hitting four home runs.

Maclin was on base for the first home run.  If you watch the highlight until Whiten gets to home plate Maclin is at home wearing jersey number 55.  After that September, Maclin became a Minor League free agent signed with the Padres, but never actually played for the team.  He never played in their Minor League system either.

Instead Maclin ended up playing in either the Mexican League or the Texas-Louisiana (Independent) every year between 1994 and 2001.  His primary team was the Amarillo Dillas where he is considered one of the greatest players in the franchise's history.  In 9 seasons in independent ball, Maclin hit .300 in 7 of them with on-base percentages hovering over .400.

Amarillo.com still has a few articles and photos of him floating around on their website.  Here he is playing first base...... 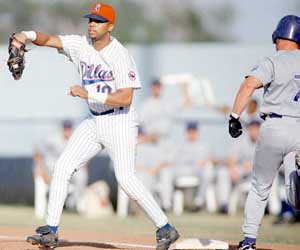 and according to an interview he gave in 2001 Joe Torre is not a very good manager and Lonnie Maclin also does stand up comedy.

There is a joke in there somewhere.  Lonnie also tried his hand at managing with Amarillo.

I too consider Felipe Alou a great manager.

Posted by The Snorting Bull at 8:40 PM