I have slowed down a bit this month with my 1964 Topps Giants project.  I am nearing the half way point with the set, but still need a few more cards to get there.  This past week, I managed to track down two more cards for my set.  One Hall of Famer, the other would be considered a great player of the era.

The Hall of Famer is up first. 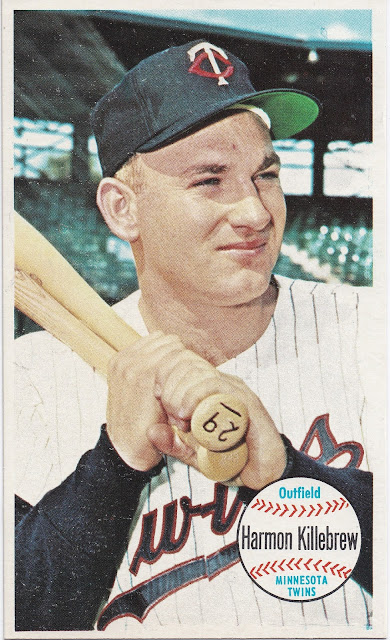 The small cost of these cards amazes me, but I was surprised to land a clean card of Harmon Killebrew from the prime of his career for less than $5.  It's not Billy Ripken, but the number 29 caught my attention when I saw this card.  Killebrew wore 3 with the Twins.  After digging into the 1963 Minnesota Twins roster, this bat likely belongs to long-time Reds outfielder Wally Post, who ended his career with the Twins. 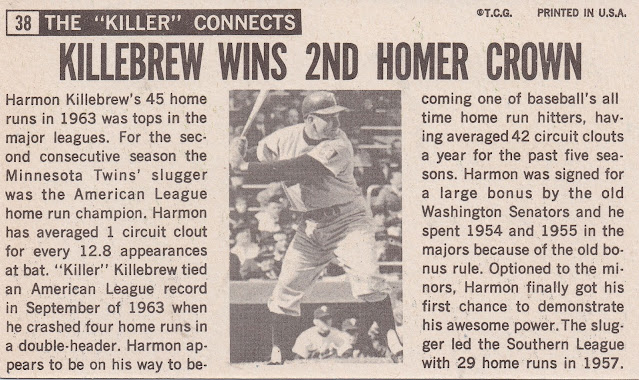 The write-up on this back of this card is actually incorrect.  In 1963, Killebrew did win his second consecutive home run crown, but it was his third overall.  He led the American League in home runs during the 1959 season, but missed out in 1960 and 1961 to Mickey Mantle and Roger Maris.  Killebrew won the home run crowns in 1962 and 1963.  Unless, they are not counting the 1959, because he tied with Rocky Colavito. 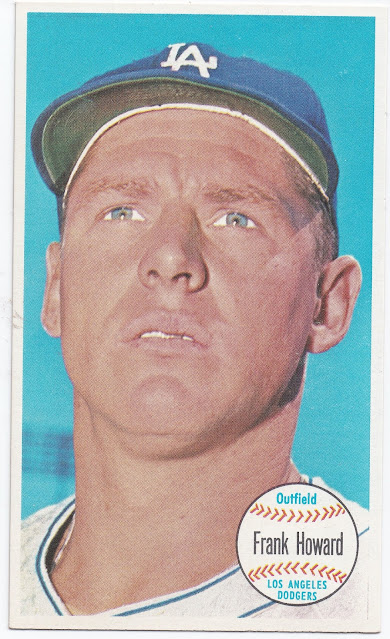 I always think of Frank Howard as a Washington Senator.  It's easy to forget about him on the Dodgers during the first half of the 1960s.  Those teams had so much pitching, but Frank Howard was the Dodgers  best offensive player.  He won the 1960 National League Rookie of the Year and hit more than 20 home runs in every full season he played with the Dodgers.  That does not sound that impressive, but the National League was loaded with pitching at this point in time. 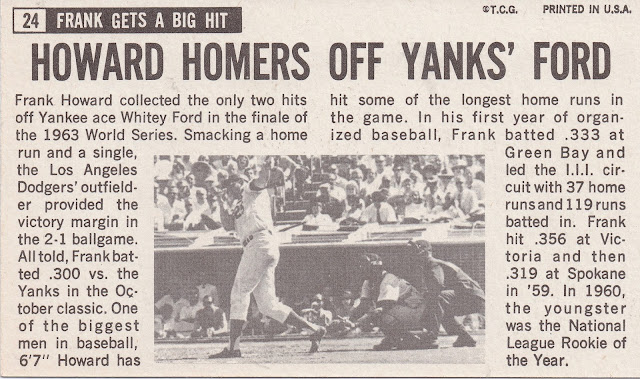 The back of this card is another where half of the space is spent on his Minor League career, but I still found it interesting.  The fact that Howard was in the Minors for a season, hit .333 with almost 40 home runs, and the Dodgers let him play a whole season there would never happen today.  Topps mentions the high batting averages in his second season, but he got up to 43 home runs.  Crazy to think about those sorts of numbers in a single Minor League stop these days.

Posted by The Snorting Bull at 9:24 AM 2 comments:

A Series Of Infrequent Posts

This has been a busy last few weeks.  I have been transitioning from being a virtual school teacher to being a hybrid school teacher.  That means that I am teaching half a class online while also teaching half a class in-person.  There were a lot of rules to follow to set up my classroom and a lot of logistical work to make it so that I can teach both simultaneously, but I think I have it set up well.
Let's hope.
After a two week break from this space, I have dedicated a small portion of my Sunday to writing a post about a few of the cards that have shown up during that time.  There are others.  Hopefully, I will get there during the next week.
My first two cards are from fellow collectors that I have met online.  First up is a Ray Lankford from the 1999 Pacific Private Stick set.  The card is a mini, but the scan is not. 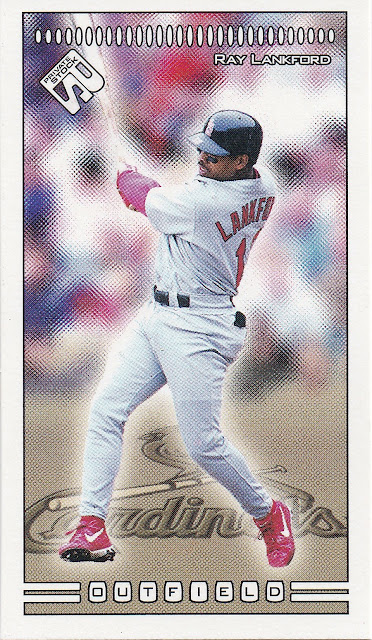 This card was from Jon at A Penny Sleeve For Your Thoughts.  You can also follow him on Twitter at @pennysleeves.  Great blog, one of my favorite reads.  He found this on the Trading Card Database and thought of me.  Very generous and another reminder that I don't do anything on Trading Card Database, but I should.
This is a parallel to the base version of the mini. 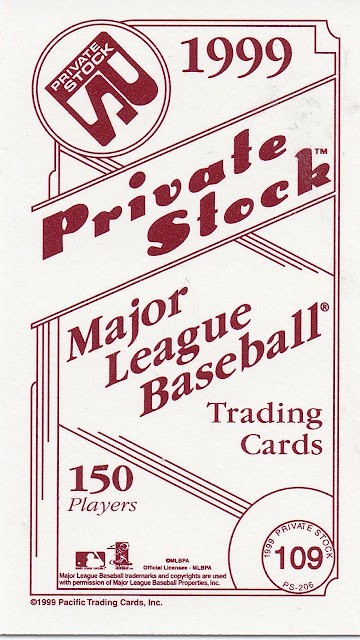 The base version had blue backs, the parallels had red backs.  Really nice card that I did not have in my collection.  I will have to send Jon a few cards in return.  Man, I really miss Pacific.  I am 100% positive I write that every time I post one of their cards.
Next, a few cards that I picked up from a long-time Facebook trading/buying/selling partner.  He always holds onto his Cardinals cards for me.  These cards included an autograph of Cardinals catching prospect Ivan Herrera. 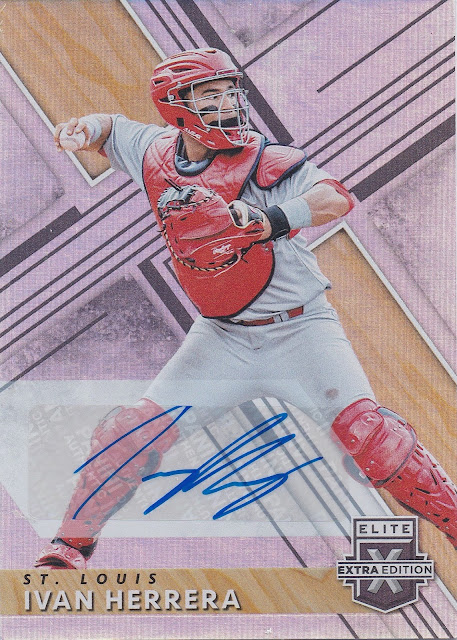 Sometime last month, I posted an Ivan Herrera autograph out of last year's Bowman's Best.  I always like when non-licensed card manufacturers make cards of catchers with their equipment on.  You can't tell that they have to airbrush all the logos off the card.
I also picked up two Tink Hence autographs.  He was a two-way player in high school who was committed to play baseball at the University of Arkansas.  The Cardinals drafted him in the second round and offered him enough money to get him to turn pro.  I am not sure its been decided whether the Cardinals are going to develop him as a pitcher or position player. 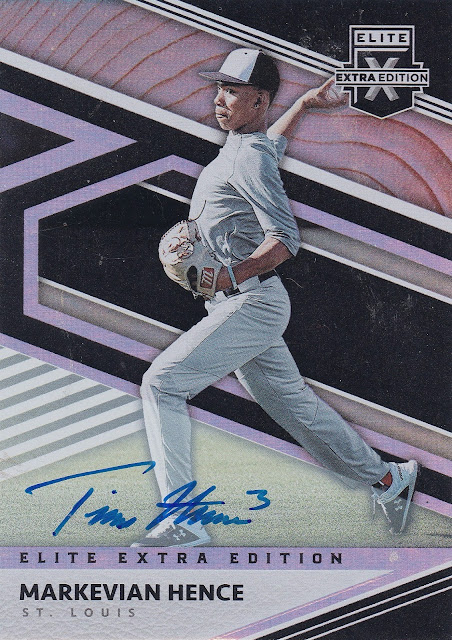 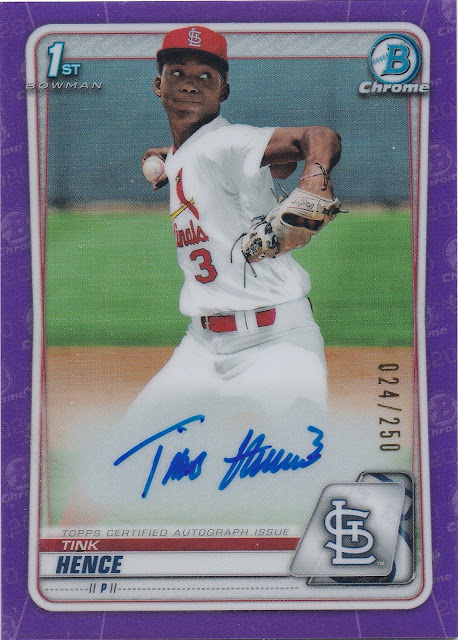 I also ended up with a copy of his purple Bowman Chrome autograph.  The border looks a little ridiculous with the red Cardinals stuff on the card.  I am excited to see what the Cardinals end up doing with this guy.
Last card.  A Cardinals player on a non-Cardinals card.  Still a really nice item though. 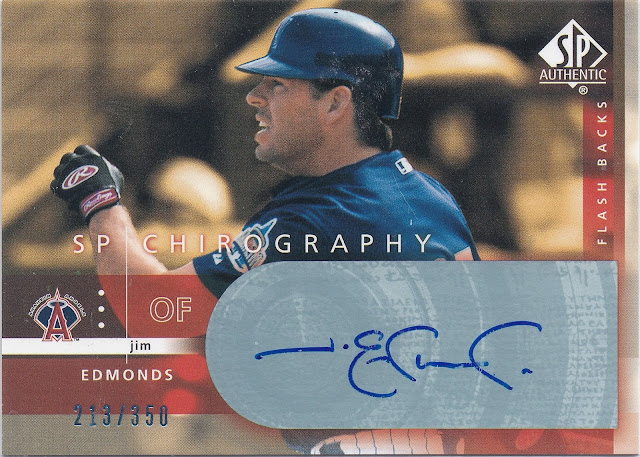 Edmonds signs baseball cards as infrequently as I post on this page.  I cannot pass up his cards when I see them at a good price.
Posted by The Snorting Bull at 11:59 AM 6 comments:

I worked hard on my 1964 Topps Giants set during the past two weeks.  I am posting five new cards tonight, which includes three Hall of Famers and a great of the era.  Really happy with how well this project is going.

Here are the new cards, saving the better cards for later in the post. 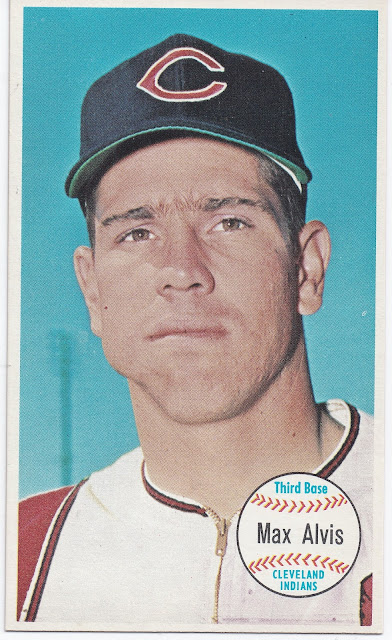 I did not know much about Max Alvis outside of seeing the occasional card of him in common boxes at card shows.  First, he went to the University of Texas and was a two sport star at the school with the football and baseball teams.  More impressive was the fact that he played both fullback and linebacker on the football team.  A two-way player and he started at both positions.  Alvis choose to play baseball.  He was a good young player with the Indians, but ended up getting spinal meningitis during the 1964 season. 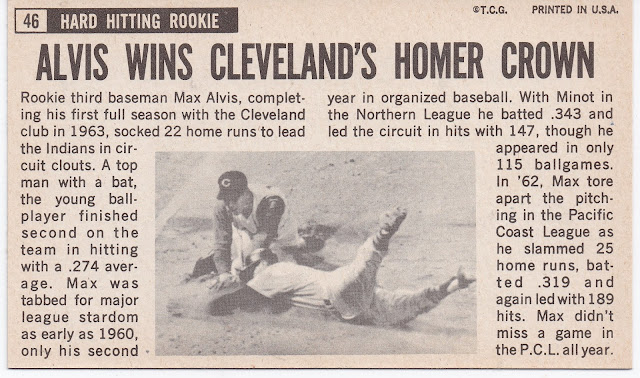 He stuck around for a few more seasons, but was never the same player.  Alvis made the 1967 American League All-Star team.  He was not having a particularly good season, but the Indians traded Rocky Colavito and Alvis was the most popular player remaining on the team. 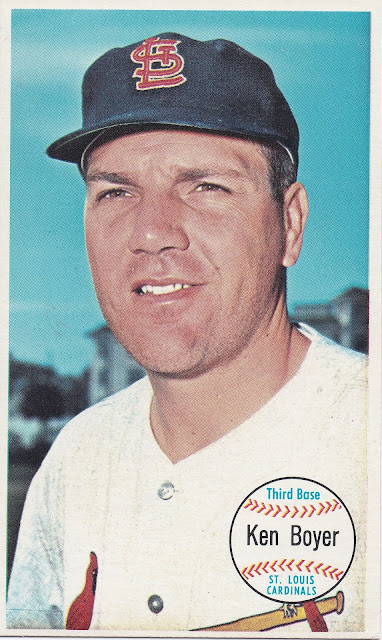 Boyer is not a Hall of Famer, but is definitely a great from the 1960s.  Boyer probably has a much better case than most people would think.  Boyer's uniform number, 14, is the retired by the Cardinals.  The only non-Hall of Famer with a retired number with the Cardinals.  Boyer was the National League MVP in 1964 and helped the Cardinals get to the World Series against the Yankees.  Boyer hit a Game 4 Grand Slam, which was the turning point in the Series, and added another in Game 7 that put the game out of reach. 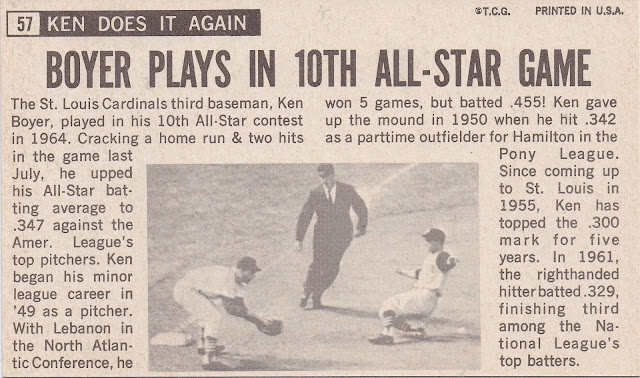 I am not sure where Topps got the 10 number from on the back of the card.  Boyer appeared in seven All-Star games at this point in his career.  I guess they could be including Minor League All-Star games too, although Boyer was not in the Minors very long.  He rose quickly and also spent time with the Army during the Korean War. 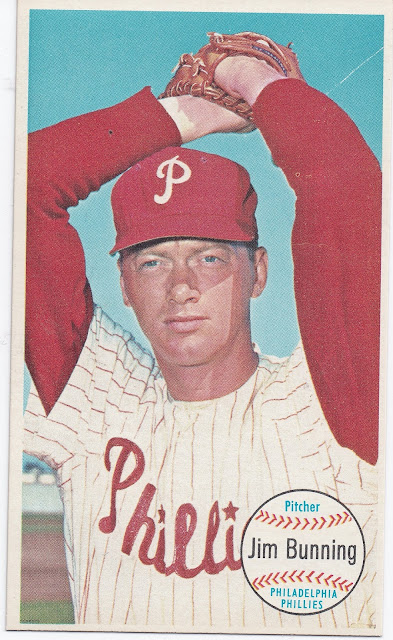 This is the part of the post that I am most excited about.  There are a lot of Hall Famers on the 1964 Topps Giants checklist and I have quite a few of them left to find.  Some are going to be harder than others.   Bunning was an easy Hall of Famer to find and not very expensive.  The right corner, near his forearm, has a slight scratch, but it's only on the surface. 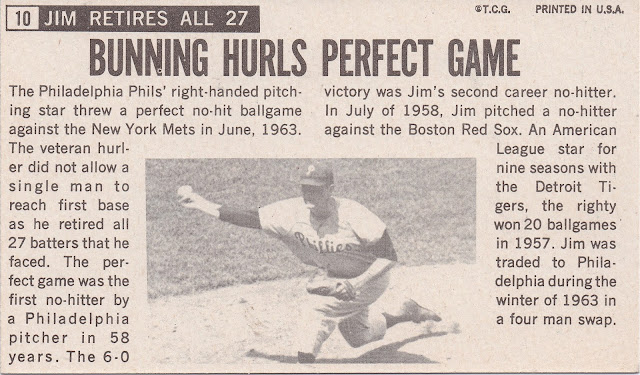 I like the back of Bunning's card.  Some of the newspaper headlines on the back of the cards feel like a bit of a stretch.  Max Alvis has a fancy headline about leading a last place team in home runs and then meanders into him playing in the Pacific Coast League.  Bunning has a perfect game on the back of his card.  If I recall the details correctly, the perfect game was thrown on Father's Day and Jim Bunning had a Philip Rivers amount of children.

They also mention the fact that Bunning threw a no-hitter for the Tigers.  Solid work here pairing an accomplishment with another good accomplishment.  Nice that Topps stayed on topic here.  Sometimes they drift..... 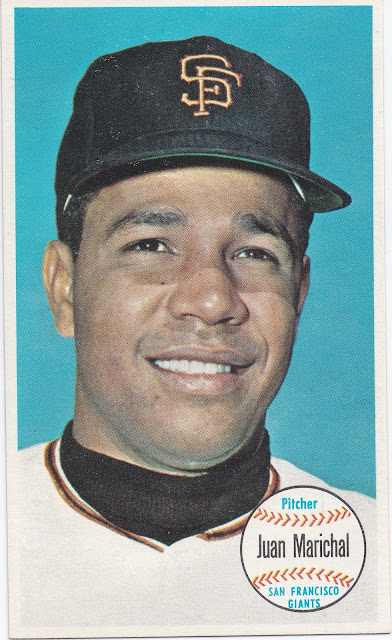 Another Hall of Famer, a little bit better than Jim Bunning.  Just my opinion.  This is a nice portrait style photo on the front of the card, but I really like the back of Marichal's card. 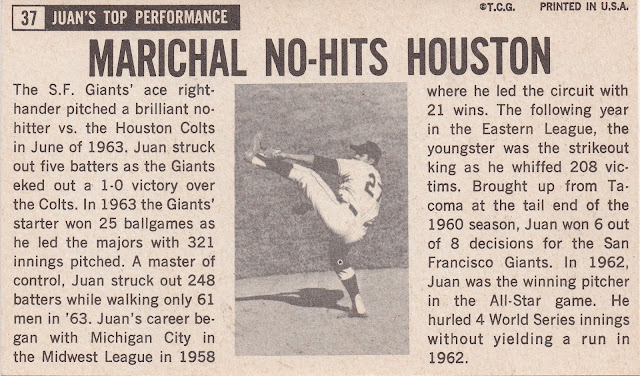 The super-high leg kick was Marichal's claim to fame while he was playing.   The Topps Giants cards do not have action photographs on the fronts of the cards.  They really missed out here.  If I ran a card company in the 1960s, every Juan Marichal card would have a picture of his leg kick.  I also like that Topps gives him a headline for his no-hitter against the Astros in 1963, but it goes downhill after the picture and headline.

Remember at the bottom of Jim Bunning when I mentioned drifting card backs?

I am a little puzzled why they spent half of the back talking about where he played in the Minor Leagues. It's Juan Marichal.  Won a lot of games, struck out a lot of batters, crazy leg kick?   Do we need to know about how he pitched in Tacoma or the Eastern League?  Could we have squeezed another sentence out of 25 wins or 248 strikeouts? Talk about the leg kick.

This is a big one off the checklist.

I will let the card do the talking. 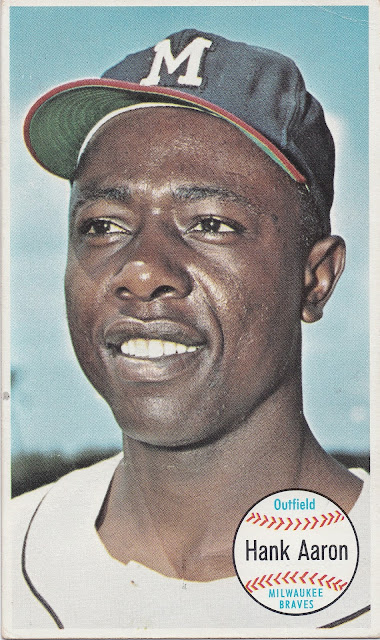 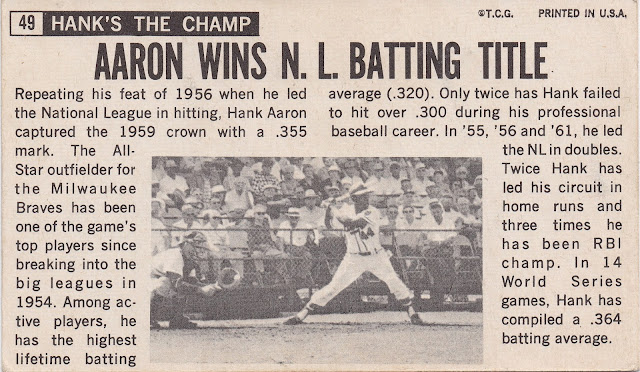 A little wear along the left edge on the front of the card, but otherwise this is in really good shape.  Not nearly as painful as I had imagined it was going to be.

Posted by The Snorting Bull at 9:10 PM 6 comments: