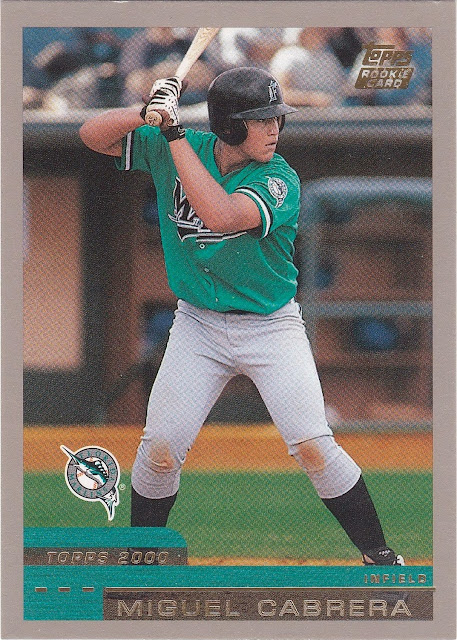 Miguel Cabrera is one of the best players on the planet.  There have been plenty of silly arguments surrounding the Tigers star over the past two years in regards to his American League MVP Awards.  It's easy to get drawn into the debate, but regards of whether or not you believe Cabrera was deserving of the award, there is little to doubt that he still ranks amongst the games best.  If you are not really into the Triple Crown fine.  Cabrera has been consistently awesome throughout his career and the baseball card hobby has caught up in recent years.  His rookie cards in the 2000 Topps products are both valuable and popular with collectors.

Hobby Impact-
I really liked Cabrera as a Marlin.  I remember watching the 2003 World Series with keen interest and was really impressed by the young Marlins outfielder.  I picked up a few of his cards, but had some reluctant because he was a Marlin.  They tend to not hold onto their players, but they also seem to devalue many of the players who don the Fish.  Cabrera played well as a Marlin, and I figured a bounce upon his trade to the Tigers, but I missed how how much Cabrera's cards would benefit from his time in Detroit.  The peak of Cabrera's career has also helped, but his cards have been on fire for the past two years.

While his rookie cards have taken off his autographs have also been very popular.  There is a slight mark down for Cabrera's cards on the Marlins, but not much of one.  Cabrera has some great on card autographs and premium pieces on the Marlins.  Of course, there have been plenty of autographs and cool cards made since Cabrera's trade to the Tigers in 2007.  My favorite came from last year's Five Star product.  I made sure I picked one of these cards up for my collection. 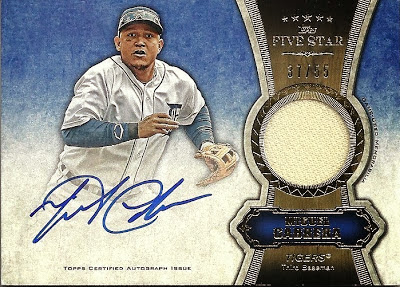 Topps also made a really cool line of relic cards to commemorate his Triple Crown win.  While there have been some irrational people running around downplaying this accomplishment (don't hate) I suspect it will likely be one of the hallmarks seasons of the post-steroid era of baseball.  I would guess that this set will be a good one to have a card or two from in the future.  This set has avoided the usual post release let down on pricing that can be common with newly released sets.  These cards sold for $20 to $30 this spring when they first hit the secondary market and they are still there right now.  Good pick up if you are looking for one Cabrera card to buy or trade for. 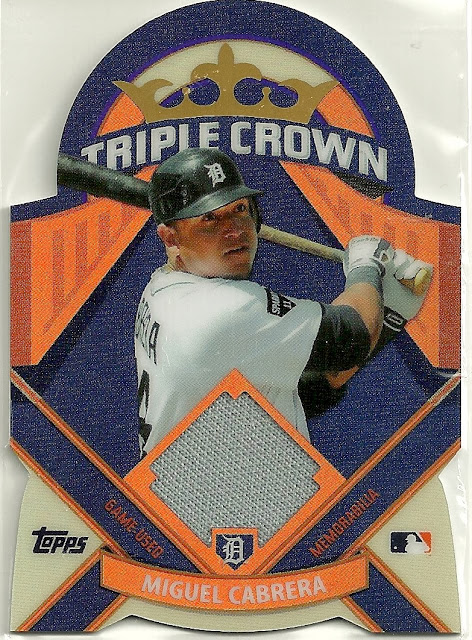 On The Field-
Cabrera has had a phenomenal last two years on the field.  Take away the two MVPs and give them to Trout and it still doesn't change the fact that Cabrera is probably one of the five best offensive players in the game today.  In many ways he reminds me a lot of Albert Pujols with his ability to hit for both power and average.  Pujols was a better base runner and fielder, but Cabrera has passed El Hombre by as an offensive threat.  Last season Cabrera posted a OPS+ of 187 and an OPS of 1.078 (both higher than Trout).

Overall, at the age of 30, JAWS rates Cabrera as the 18th best third baseman.  I'd say that Cabrera is not quite a Hall of Famer at the moment, but it's getting pretty close.  He's surrounded by third baseman like Ken Boyer and Dick Allen who were really good players, but not quite Hall of Famers.  Another two or three seasons and he will be knocking on the door behind players like Paul Molitor and Adrian Beltre.  There is probably good reason though to suspect that Cabrera will be back at first base soon, so lets take a quick look at how he stacks up there....

Surprisingly Cabrera's 54 career WAR place him at the edge of the top 25 first baseman of all-time right by Hall of Famers George Sisler and Tony Perez.  However, his OPS+ of 154 places him inside the top 20 with Frank Thomas and Joey Votto close by, but ahead of Hall of Famers like Willie McCovey and Harmon Killebrew.  Clearly Cabrera is close to being a Hall of Fame player.

Favorite Card-
My favorite Triple Threads card in my collection and almost a 1 of 1 card of Miggy.  I've posted this card before, but it's pretty awesome. 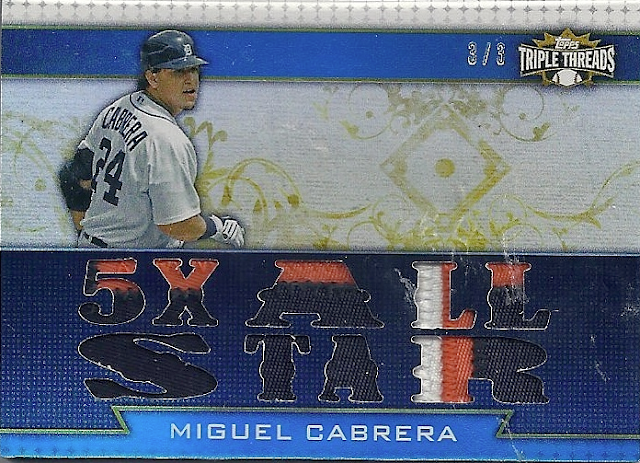