Before we begin with today's blog post a special shout out to the Snorting Bull's favorite sister-in-law residing in North Carolina: Christina Seguin.  I appreciate your retrieval of my Ipad last night, your patience on our long trip through rain, snow, and the mean snowy streets of Frankenmuth on Sunday, and your awesome Christmas gift which included an evening of childcare.  Thank you. 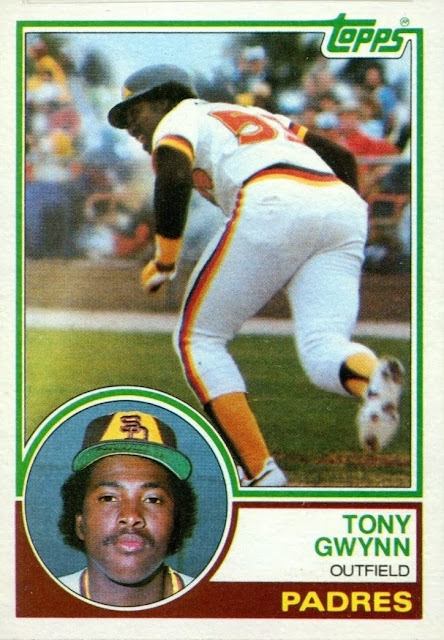 This is part two of my number 12 entry into my baseball card Top 50.  By doing two number 12s it gave me an oppurtunity to squeeze more cool players into my countdown, but more importantly gave me a chance to show how two players who were great at their respective crafts have been treated as completely opposites by Hall of Fame voters.  While in part one I discussed Mike Piazza's credentials as the best offensive catcher of his generation, this part is about Tony Gwynn who was the best hitter of his generation.  While Gwynn never crossed twenty home runs in a season, he won eight National League batting titles and never played a full season in the Majors where he did not end the season with an average over .300.  Of course, Gwynn is also well thought of around the baseball card world too.  Not only is Tony Gwynn a cool player to collect, but he is one of the great ambassadors for the game of baseball.  He's currently coaching college baseball at San Diego State and is one the easier and more approachable Hall of Famers around.  I had a chance to meet him a few years back at a Durham Bulls game.  Really, really friendly and a great signer.

Hobby Impact-
Gwynn first appeared on the hobby seen in the 1983 card releases.  My personal favorite is his 1983 Topps cards, but I know that Gwynn has been vocal about his dislike for this card in the past.  The Donruss and Fleer cards are both nice, but the early 80s Padres uni on his Topps card is just awesome in my opinion.  Gwynn rallied the Padres to the National League pennant in 1984 and won his first batting title in the process.  Both achievements seemed to be a nice launching point for popularity within the baseball card industry.

Over the years Gwynn has always had a good following from fans in the hobby.  Recognized as the best hitter in baseball, Gwynn's cards always seem to have good value and collect-ability with fans.  While I am not a baseball card collector who flocked to Gwynn cards I certainly appreciated nice ones when they came my way.  If I landed a nice Gwynn card I kept it and put it in the collection.  Rare for me to trade or sell a nice Gwynn card.

In many ways I feel like I treat Piazza, who was the subject of the first part of #12 on my Top 50 countdown, and Gwynn cards in a similar manner in my collection and they are also treated similarly by collectors in the secondary market.  Both enjoy great reputations from their time in the game and offer collectors a great value and variety of cards.  While Gwynn is Mr. Padre, Piazza is well respected and liked within two large fan bases on opposite coasts.  Plus there's that weird Marlins thing too.  One of the biggest differences between the two players is their signing habits.

While Piazza has always been decidedly stubborn about signing for cards and collectors, Gwynn has signed a ton of cards.  However, there still remains a great market for Tony Gwynn autographed cards.  Premium Gwynn autographs will usually be found around $50 while more common Gwynn autographs can be found in the neighborhood of $20 to $25. 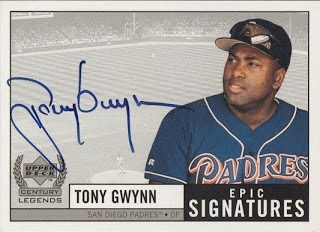 His Upper Deck Legends autograph is probably my favorite in my collection.  However, Gwynn has a great autograph and you cannot really go wrong with most Tony Gwynn autographs.  Pick one you like and go for it.  If you want a cool story to go with your Gwynn autograph, wait around and see if you can get Mr. Padre in person or see if you can get him through the mail.  Tony Gwynn is one of the best in-person signers I have ever met.  Really nice and friendly towards fans, takes his time signing items, and chats up fans while doing it.

On The Field-
As mentioned at the beginning of the blog post, Gwynn is considered the best pure hitter of his generation.  While he didn't hit a ton of home runs there is also a tremendous amount of skill in winning eight batting titles over your career.  The best effort, in my opinion, came in 1994 when Gwynn ended the strike shortened season with a .394 batting average.  One of the closest attempts at the seemingly unreachable .400 batting average plateau.  Gwynn also put together a remarkable 1998 season in helping to lead the Padres to the team's second World Series appearance with a .372/.409/.547 line with a career high 17 home runs and 119 RBIs.  While the Padres were swept out of the World Series that season by the great New York Yankees, Gwynn posted a .500 batting average for the series.

JAWS rates Gwynn as the 14th best right fielder in MLB history which ranks behind a big chunk of other right fielders in the Hall, but still guys like Dave Winfield and Enos Slaughter.  He's also ahead of Ichiro and Gary Sheffield, who are in my opinion, worthy of serious consideration when they become eligible.  For some of the players on my list, I have done a comparison of OPS+ numbers to help their case, but in the case of Tony Gwynn he falls further down the list of right fielders when ranked by that statistic.  In fact, Gwynn drops to 38th which is behind most of the other Hall of Fame right fielders and also guys like Vlad Geurrero, Darryl Strawberry, and Jack Clark.

There have been a few conversations I have party to over the past two or three years where I have heard a few people mention that they don't really like Gwynn in the Hall of Fame because he just got 3,000 singles over 20 years.  Not true.  There aren't many players like Tony Gwynn around anymore and seriously debating him out of the Hall of Fame is a lot like some of the people who swear that Miguel Cabrera isn't worthy of placing in the top 5 on an MVP ballot.

There are plenty of people in the Hall of Fame for one singular skill.  Ozzie Smith could field.  Harmon Killebrew hit home runs.  Cal Ripken played a lot of games in a row.  Tony Gwynn could hit a baseball for a single.  Even though all of these guys and more have a single claim to fame, there is so much more to their game then just diving for ground balls, or showing up for every game for twenty years.  Gwynn could hit and few others could do it better than him.

Early in his career Gwynn could steal bases and has over 300 for his career, including a 50 steal season.  Gwynn was a superior defender during the first half of his career.  Gwynn won five Gold Gloves, ranked in the Top 10 in Defensive WAR twice, and frequently appeared in the National League leaders in putouts and assists for outfielders.  Not the best quality video, but here's a little taste of Gwynn's defensive talents on display...

Gwynn was elected to the Hall of Fame in 2007 as one of the best players of his generation.  Ironically, Gwynn's career intersected with the steroid era, but there was little doubt about Gwynn's place in the history of the game when his eligibility rolled around.  There were never any allegations of Gwynn using steroids nor any evidence to suggest that he ever used.  Why don't guys like Jeff Bagwell and Mike Piazza get the same nod from sports writers?  I am not sure, but it's a little bit aggravating to see take place year after year. 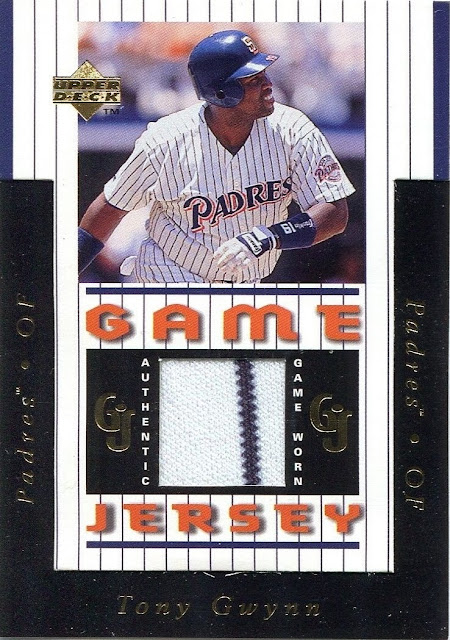 This was one of the first big dives into relic cards by any card company and while the Griffey appearance in the set is a no-brainer and the Rey Ordonez appearances is a head-scratcher, I love that Gwynn got a slot in this set.  Again, Gwynn is one of the great guys in the game and really did a lot to drive interest and enthusiasm in the game.  There are plenty of cool Gwynn cards out on the market, but the land breaking sets often pass by solid nice guys like Gwynn for splashier names who might look silly down the road.  See Rey Ordonez.  These cards are still not too difficult to find and can usually be had for less than $20 if you are patient.  Highly recommended card to find for your collection.