Bring me all the inexpensive cards from the late 1990s and 2000s. How many of Ray Lankford's Collectors Choice cards have I posted? Several, so let's talk about the Upper Deck Victory cards. The packs were $1 and you were guaranteed a Mark McGwire or Ken Griffey Jr. insert card depending on the year. Although, Upper Deck tried to ruin this product by releasing a shiny foil version that cost more than $1 per pack. 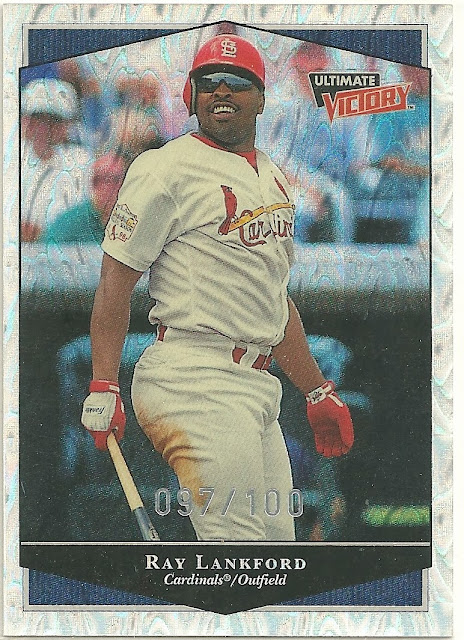 It's also not what the Random Ray posts are about. Let me roll out something that is not serial numbered that has no production limitations.

This card is way better. Well, in it's own way. 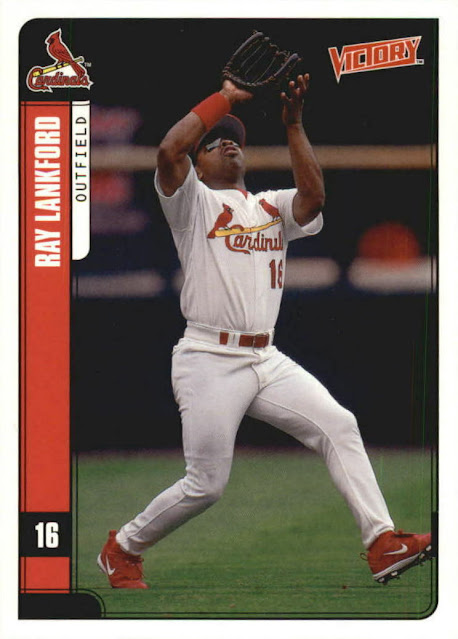 I like the picture on the front of this card. At first glance, it just looks like Ray Lankford catching a fly ball in Busch Stadium. However, there are very few cards that show him playing in left field. This is a rarity. Ray actually moved there in 1999 when the Cardinals made J.D. Drew an everyday player. In 2000, the Cardinals traded for Jim Edmonds and Drew moved to right field. Lankford had slowed down at this point in his career, but the three of them made a good outfield for that season.
Back of the card. 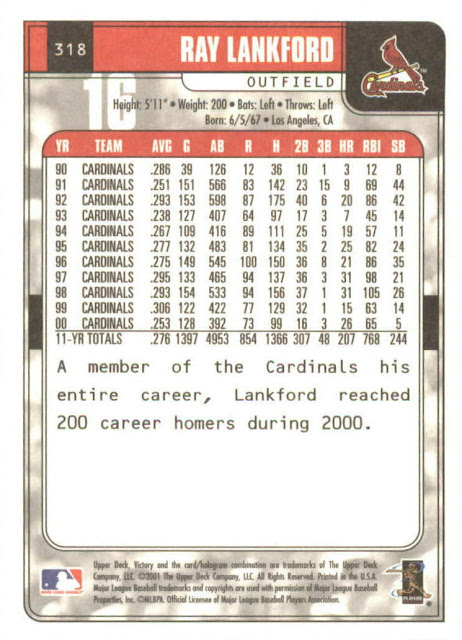 Upper Deck went with their standard stat box on these cards. It's simple, but you cannot go wrong with a white background and black writing for stats. Now, about the fact box on the bottom. That's a fine accomplishment to point out, but we don't get any other details?
Let me write my own.
At the time Ray Lankford crossed 200 home runs with the Cardinals, he was only the third player in franchise history to reach that plateau.  Anybody know the other two?  There were also three other players on the 2001 Cardinals who would end up crossing the 200 home run mark with the team?  Think about it, answers below.
The two players with 200 home runs with the Cardinals before Ray Lankford were Ken Boyer and Stan Musial.
The three other members of the 2001 Cardinals who hit more than 200 home runs with the team were Albert Pujols, Jim Edmonds, and Mark McGwire.

Posted by The Snorting Bull at 8:54 PM