This is the second Collectors Choice card I have featured on my Random Ray posts. Yes, I am going to post all of them at some point, because these were great cards. I don't care that they were marketed for kids or that they were $1 pack cards at discount retailers.

This card stays true to Upper Deck as a card brand. Great photography with a simple and modern design.

Here is the front of the 1995 Collectors Choice Ray Lankford card. 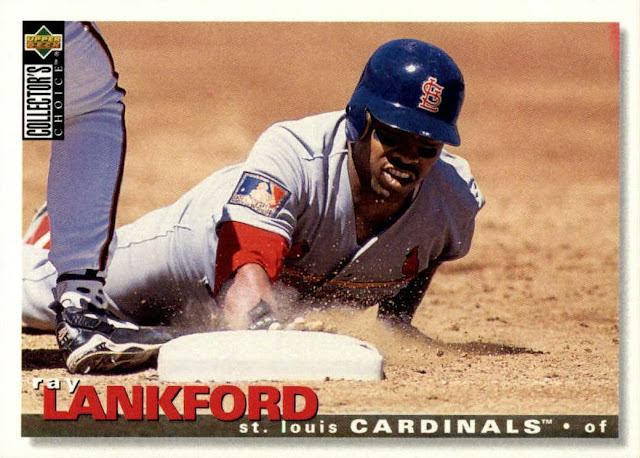 All of the design elements, player name, team name, and brand logo, are all on the edges of the card. The main focus is the picture. This is a nice action shot of Ray diving back into first base against the Giants. I would try to do that thing where I figure out where and when the picture was taken, but Ray was frequently on base during road day games against the Giants in 1994.

I love the Cardinals road uniforms from the 1990s and early 2000s. I still have no idea why they gave up on wearing the blue hats for every road game. It's a good look. 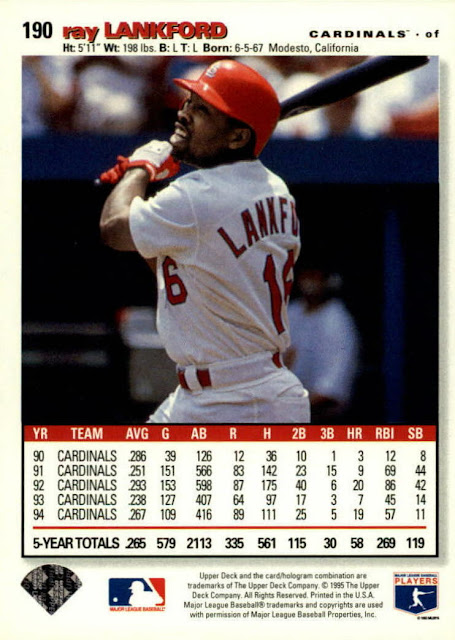 The stats are really simple on the back, but you get another really nice big color photograph of Lankford. The designer did a good job of balancing the space between the stat box and picture. Honestly, knowing that this was geared towards kids, I was in high school which counts, I don't mind the simple stat box.
If you have a favorite player from the 1990s, you can never go wrong finding a card of them from a Collectors Choice set.
Posted by The Snorting Bull at 6:33 AM