A Nice Day For Some Artwork

I spent some time cleaning up around my card room last weekend and found some Project 70 art cards that I bought over last year that were worthy of a post. I picked up a few of these back at the start of the 2021,  but the Project 70 cards have not held my interest as much as the Project 2020 cards from two years ago. Some of the artists are the same between the two projects, with plenty of new artists mixed in, but it felt like there were a lot of similar card subjects.

If you are a Yankees collector or Fernando Tatis Jr., there are a lot of cards. Cardinals and Durham Bulls collector? Not so much?

I did not check-in with the new designs on a daily basis, so maybe there are a few good cards that I am missing out on, but these were the four cards I ended up adding to my collection during the past year. 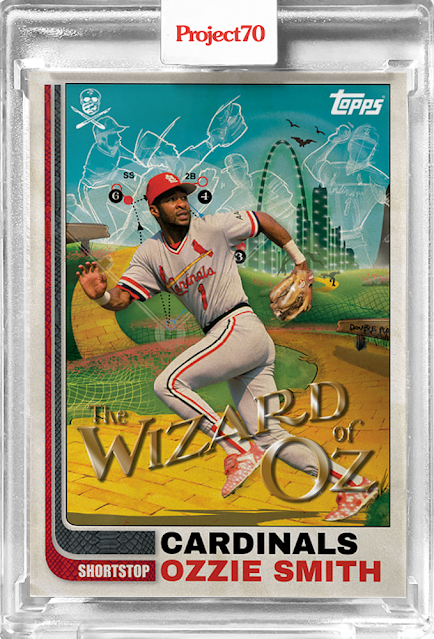 First up is an Ozzie Smith card by Shoe Surgeon.  As you can guess, the Shoe Surgeon is a guy who customizes shoes. His rates are a little step, otherwise I would send him my canvas Nikes I wear to school and get some cool 4th Grader customization. Back to the card. I like the play on the movie "The Wizard of Oz" on this card. It's a no-brainer with Ozzie Smith, but I am honestly not that many card companies have made that connection over the years.
The gold path and the Emerald City/St. Louis skyline mash-up are the best elements of this picture. Not sure about an emerald Arch, but I am willing to let it go for this card. The action shot of Ozzie in front is a nice touch as well. Are those flying monkeys around the Arch? The cloud picture on the right-side looks like the play where he cleared Lenny Harris. 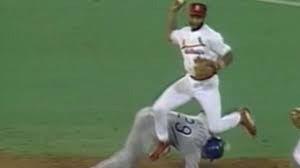 This happened in the early 1990s. Lenny Harris went into second base half-standing trying to take out Ozzie. Pretty impressive given the fact that Ozzie Smith was not a very big guy.
I checked out the other cards that the Shoe Surgeon has made for Project 70. Seems talented, but I am sticking with just this Ozzie Smith. He would be one of the artists who went for a lot of really common and repeated subjects.
Next. 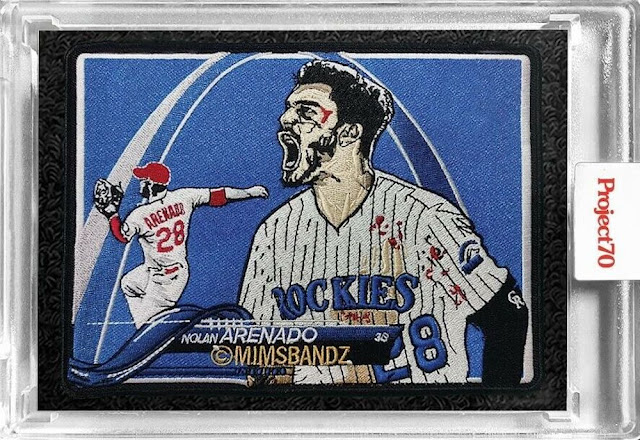 It appears that there were not many current Cardinals players included in the Project 70 set. I am not really surprised. Arenado has two cards, but one is a dual card with Red Sox third baseman Rafael Devers. I really like this card with him pictured as both a Cardinals and Rockies player with the Arch in the background. A Cardinals only card would have been better, but I don't really have much of a problem with the Rockies. All of their good players end up in the Cardinals, right?  There is a lot of purple here, but I like the overall concept of the card.
Mimsbandz is another new artist for Project 70. He actually has some really good artwork and I might have to pick up a few of his other cards. There are a lot of really great 1980s players featured in his artwork. Yes, a few Hall of Famers, but also a lot of personalities from the decade along with great of the era types. There will definitely be some more Mimsbandz cards on my blog at some point in the future.
The next two cards were both made by a favorite artist from the Project 2020 cards, Efdot. 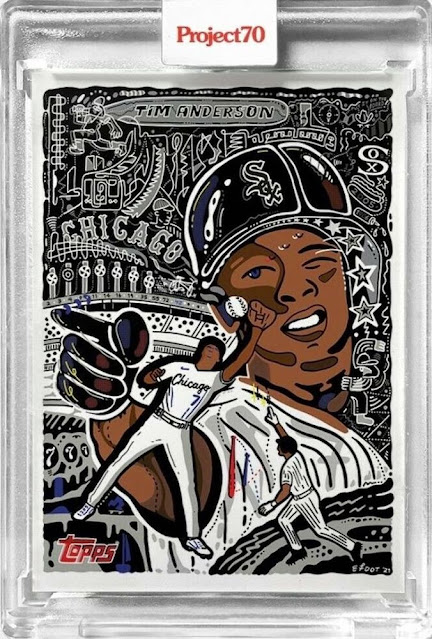 Beyond enjoying the artwork made by Efdot, he also picked some different players out for his Project 2020 cards. Yes, I think he made an Ohtani, Trout, and a few Yankees players, but also some players who probably do not get enough attention. Tim Anderson seems to be one of those players. Flashy and exciting, but he's also made the All-Star team and won a batting title. There is a lot going on at the top of this card with the black background and white doodles over the top.  Efdot always has a lot of "Easter Eggs" in his art work. It's fun to stare at these cards sometimes and see what you can find. A few old White Sox logos, an L train, a 2005, the fireworks pinwheels from the Comiskey Park scoreboard, etc. 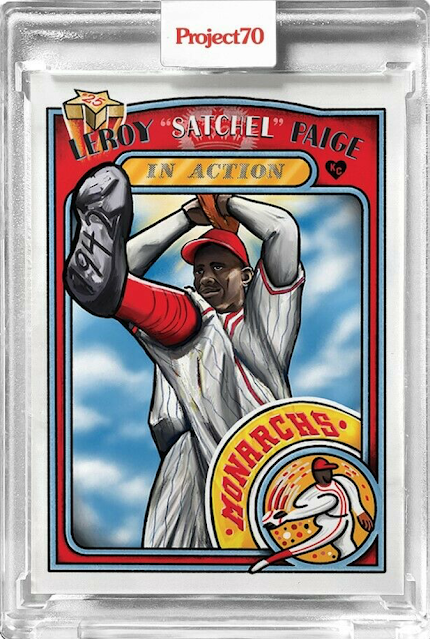 Efdot is also one of the few Topps artists who made cards of Negro League players for the set. Even as Major League Baseball has worked to claim the players and their stats as part of the past history of the game, it still feels like the great Negro League players are completely underrepresented with baseball cards. Love the art work here with the high leg kick.
The 1942 on the bottom of Satchel's shoe is for the year that the Kansas City Monarch defeated the Homestead Grays in the Negro League World Series. The Grays were led by Josh Gibson, the best power hitter, while the Monarchs were led by Paige, the best pitcher. The Grays apparently had Satchel's number and always got the best of him when the teams played.
The highlight of the series took place in Game 2 when Paige entered the game in relief with two out in the seventh inning and the Monarchs leading 2-0. The first Grays batter tripled. After a mound visit from his manager, Paige walked the bases loaded to face Josh Gibson. There are different stories about how the at-bat progress, but they all end with Gibson striking out to end the inning. The Grays lost the game and were swept by the Monarchs.
Posted by The Snorting Bull at 10:06 AM