My last school year ended midday on a Thursday afternoon last month. It was my last day at the school I have worked at for the past ten years. It was time for something different and new challenges. More importantly, something a little closer to my house. 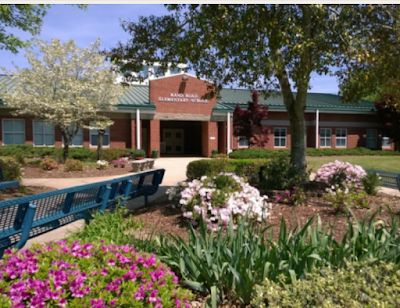 After moving a minivan load of books over to my new school, I went home to start my summer vacation. I was really tired at the end of the day, so I think I ended up going to bed around 9. A few hours later my alarm went off. I woke up, took a shower and got dressed, and drove into work.
It was Friday. The first day of my new school year and my new school. 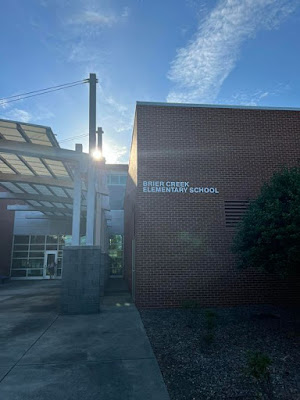 My summer vacation was measured in hours this year rather than days or weeks. My last actual vacation day was on April 14th, which is a long time ago for someone who has worked the same schedule for the past 15 years. I teach for roughly nine weeks starting at the end of July and take three weeks off at the end. Multiply the schedule times four and you've got a complete school year.
I am about to enter my fifth straight month of teaching with no significant break, which is a lot in my world. Even if you are on a traditional calendar, it's only four months between the beginning of the first day and Thanksgiving break.
It has been a long time.
There are a lot of little things I have been doing to cope with the extended workload. I have been trying to get more sleep, packing some good lunches, and getting extra fresh air. In addition, I have also been trying to be intentional about setting aside time to work on my baseball cards. Some of that time has been spent sorting out cards...... 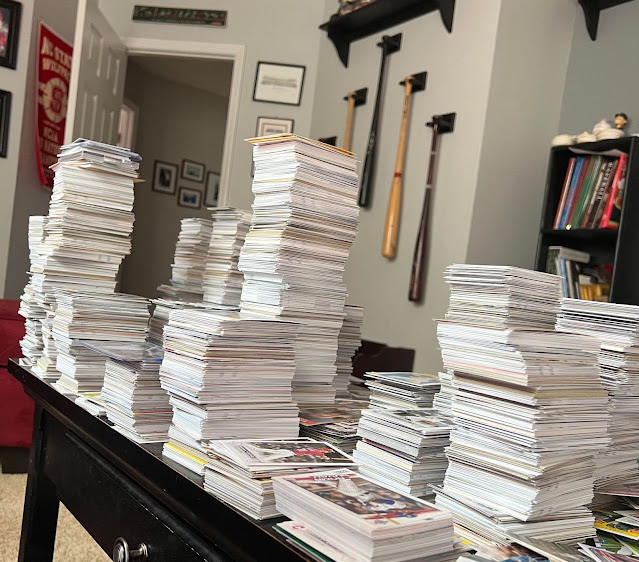 I am mostly trying to organize my single cards that are not attached to a set, or find the last few cards needed to complete some of the more recent near-sets that I have assembled. I have also been working on building a few new sets, and also opening up some retail packs. My most recent goal has been to complete the Topps Series 2 set.  It feels like a throwback to childhood when I bought a few packs of cards and spent a chunk of the spring and summer trying to assemble a complete set of Topps cards.
I have been helped out along the way by a few Target gift cards which I received at the end of last year. It also doesn't hurt that my new school is located in the middle of a large retail area. Think of a large box store and there is probably one within five to ten minutes of my classroom.
Here are two of the retail blaster boxes that I have picked up over the past few months. 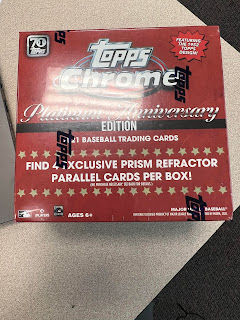 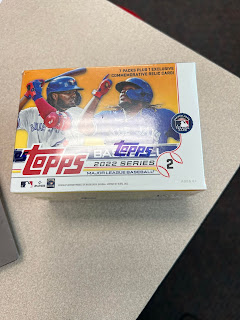 I thought I would share out a few of my favorite cards I picked up along the way.
I had originally set out to collect Topps Series 2 with retail packs slowly over the first quarter of the year. I reached the goal in half a quarter, but was greatly aided by having two students at my previous school gift me retail blasters on the way out the door.  I used my gift certificates to buy two more Series 2 retail boxes. I have purchased one Topps Series 2 Blaster with my own money.
Five boxes of Topps Series 2, one small COMC order, and I am done.
My favorite card out of the base set is the Adam Wainwright and Yadier Molina combo card. 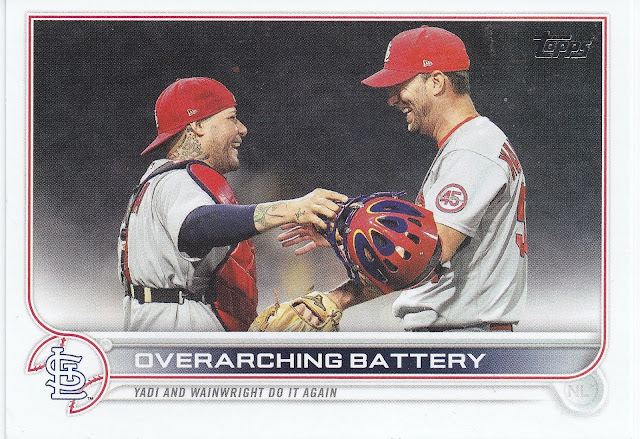 They have only been playing together since 2006. Not sure why it took this long for Wainwright and Molina to appear on a baseball card together before this year. I know I am really bias, but I hate that there is a checklist on the back. 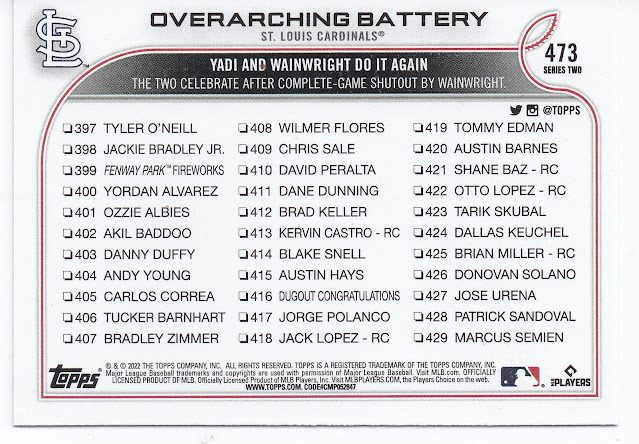 Yes, Blake Snell is card 414, but give me some information about Yadier Molina and Adam Wainwright. If nothing else, just give me a photo of the Carlos Beltran strikeout at the end of the 2006 National League Championship Series. 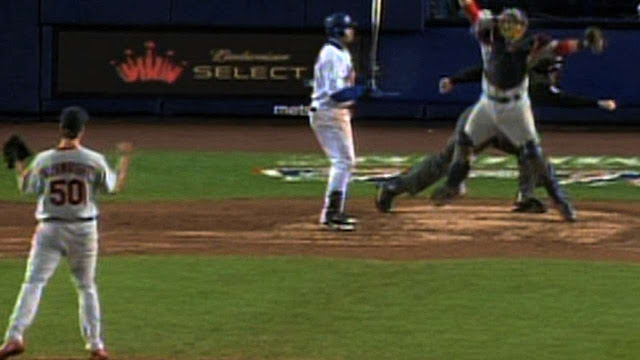 Moving on.
The Topps Series 2 boxes all come with a batting helmet card. They look a lot like the 2007 Sweet Spot autograph cards, but the helmet is made out of metal rather than plastic.  I pulled two different Cubs batting helmets. 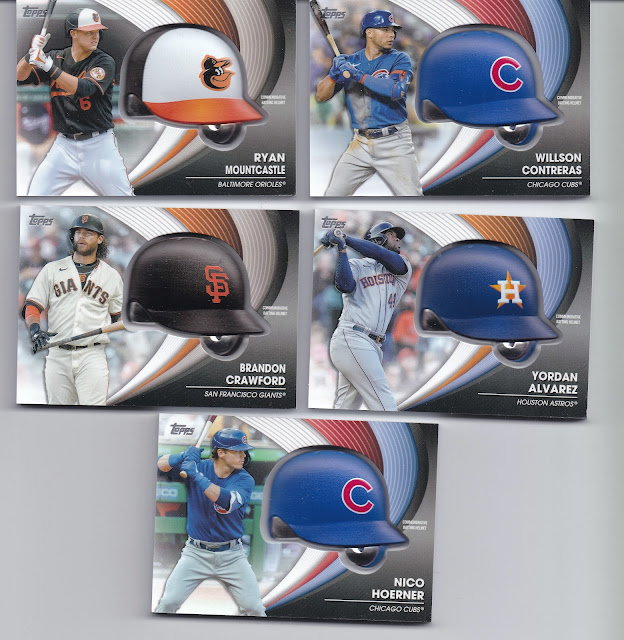 These are actually really nice for manufactured relics. There is a Goldschmidt and Arenado card in this set, so I am going to go ahead and add those to my Ebay watch list. They will be sitting there until I can find them for a few dollars.
I also pulled a Joey Votto Home Field Advantage card. 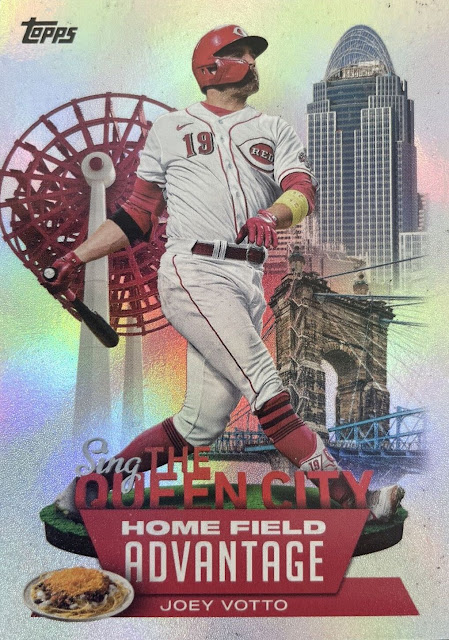 I love the plate of chili in the bottom corner. I don't eat chili, but it's the sort of local food reference that Topps should have put onto the Yadier Molina card. I needed some toasted raviolis or cans of mass-produced beer.
More cards, but only the highlights.
I bought a few packs of Donruss. Please, do not repeat my mistake. They are terrible, but I did get a Matt Manning autograph. If Matt Manning's arm does not fall off, I think he will be a good pitcher. Unfortunately, Matt Manning's arm is half-way off already. That's quite the signature.
I also bought a few packs of Topps Gallery. 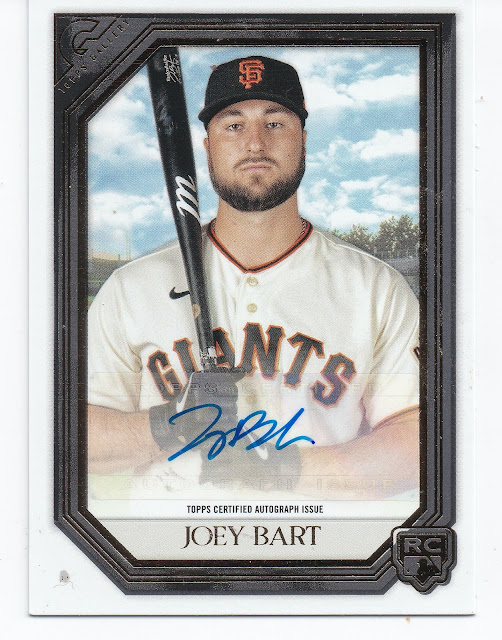 This set is not nearly as good as it was in the 1990s, but I did land an autograph of Giants catching prospect Joey Bart. Pretty good pull for a retail pack of cards.
Next up, a box of USA Baseball cards. I do not love the regular MLB cards of Panini, but ruining the USA Baseball card set is too far. 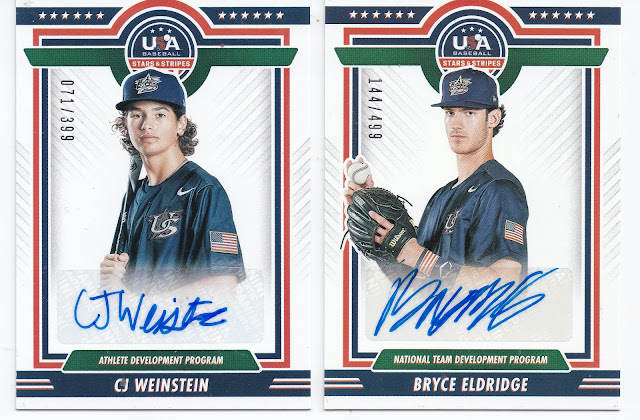 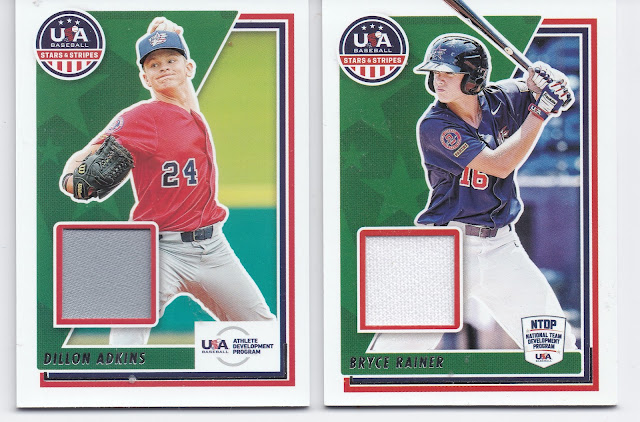 The player on the left is a sophomore in high school.
The player on the right is a junior in high school and committed to play at UCLA in college.
Still wild to think that Panini is making baseball cards of high school kids.
In ten years, one of these guys is going to be working an office job and give out his Panini baseball cards rather than a business card.
Did I mention that my new classroom has a view of a Walgreens? 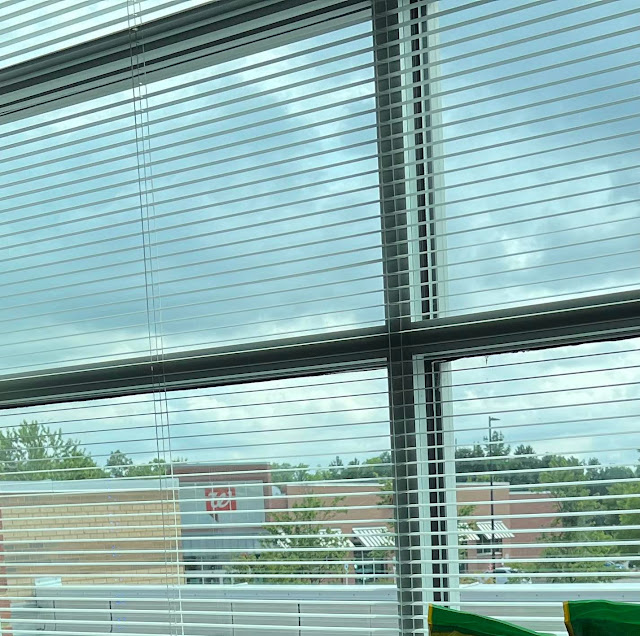 It came in handy the one day. Horrible headache. I just walked across the street and picked up some Advil and a few packs of Gypsy Queen. Felt much better afterwards. 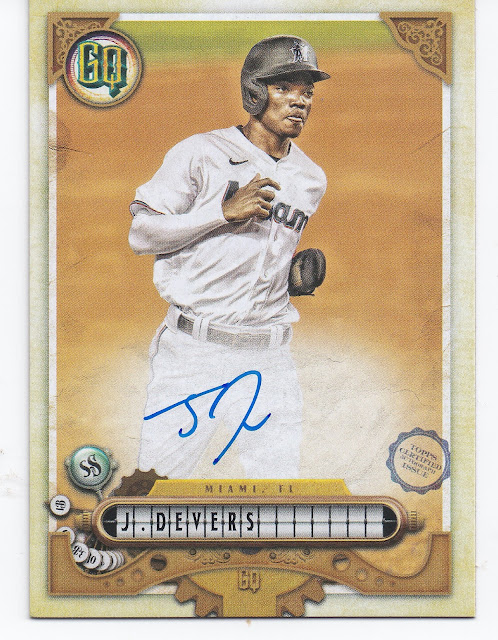 Gypsy Queen was decent. Similar to Gallery, this product has seen better days. I pulled a Jose Devers autograph out of a pack. Any retail autograph is a win.
That brings me to my last retail product, which is easily the best. This is from the 2021 Topps Chrome Anniversary set. Which was it released in the middle of 2022?  I don't know. Do we need another set that borrows the design from the 1952 Topps set? Yes, we do if this is what the cards are going to look like.
Here are my shiny, wavy, and colored cards I pulled out of my box. 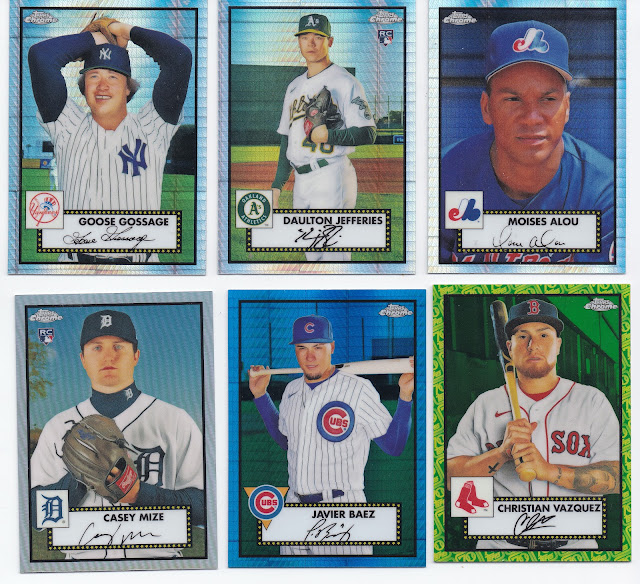 This is where my post veers from a bunch of cards that I pulled out of retail packs and into a future project.
I really like this set and had contemplated printing off a checklist and tracking down all the cards. However, it has 700 cards and feels like it would take a ton of time and money to assemble. Instead, I am going to track down some of the Cardinals and Durham Bulls players in the set.
My first former Bulls player arrived in the mail a few days back...... 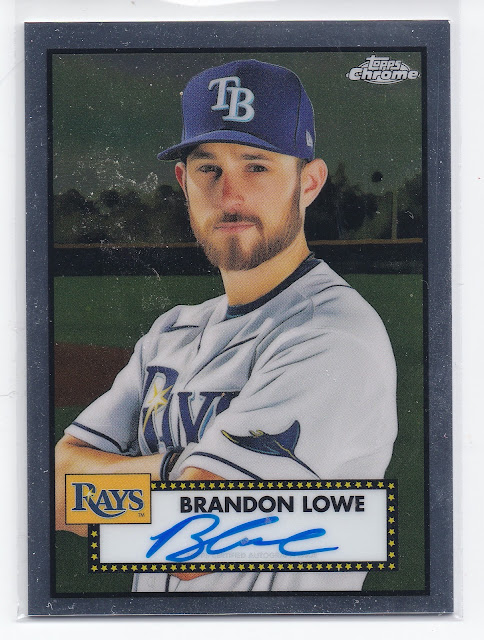 The autographs are not exactly cheap, but there are only three Cardinals and three Rays autographs. Well, I am now down to two Rays autographs. I think that Dylan Carlson and Scott Rolen are the two most difficult and expensive.
Anyway, that was a fun post on retail baseball cards. I still have a few more weeks until I get a few weeks off. Maybe there will be another retail baseball card post or two along the way.
Posted by The Snorting Bull at 3:58 PM