Second 1999 Ray Lankford card in a row, but this 1999 Stadium Club card has a connection to last week's Fleer Brilliants card.  The back of the Fleer card used a picture of Lankford wearing a St. Louis Stars uniform from a "Throwback Game" that the Cardinals and Braves played against each other during the 1998 season. 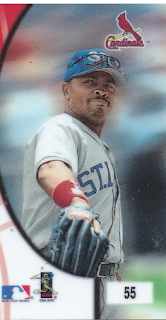 I really liked the Cardinals and Braves wore throwbacks belonging to Negro League teams.  As a fan, it's something different than the usual polyester 1970s or 1980s throwback.  I like the 1980s Cardinals, but how many times do we need blue polyester pull-overs?  I was also really happy to see several different card brands use pictures of the Cardinals (Braves too) from this game in their 1999 sets.

I choose to use Lankford's 1999 Stadium Club this week due to the fact that it features an action picture of Lankford in his St. Louis Stars throwback uniform on the front of the card.  Stadium Club is a brand that was built on great photography and I feel like this Ray Lankford card fits that branding well. 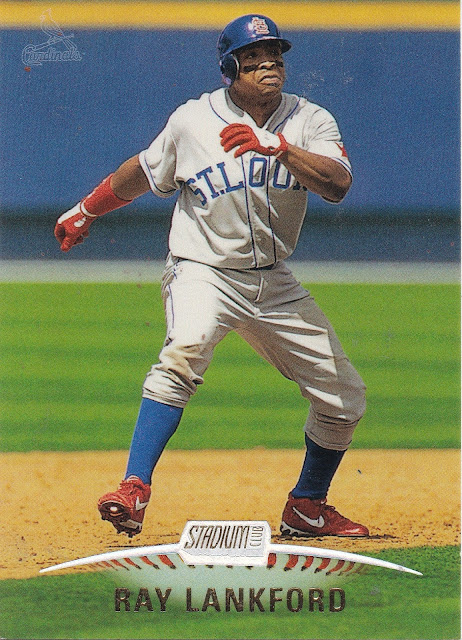 Love this action shot of Ray leading off of second base.  These are amongst my favorite throwback uniforms the Cardinals have worn.  The jerseys have a very simple design, but I like the color blue used for the socks and writing, the font used on the "St. Lous", and the red star on the side of the sleeve.  Throwbacks can sometimes look goofy with modern shoes, wristbands and batting gloves, along with the batting helmets.  None of those really look bad with this uniform.

Bonus St. Louis Stars cards factoid before I post the back of the Stadium Club card.  I want to talk about late 1990s Fernando Tatis cards that use his picture from this game.  Here are two examples: 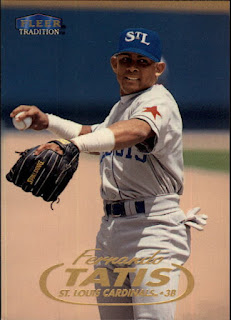 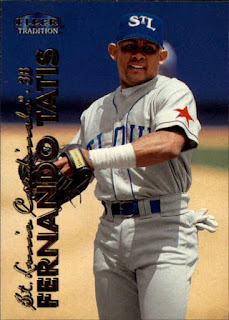 Back to Ray Lankford. 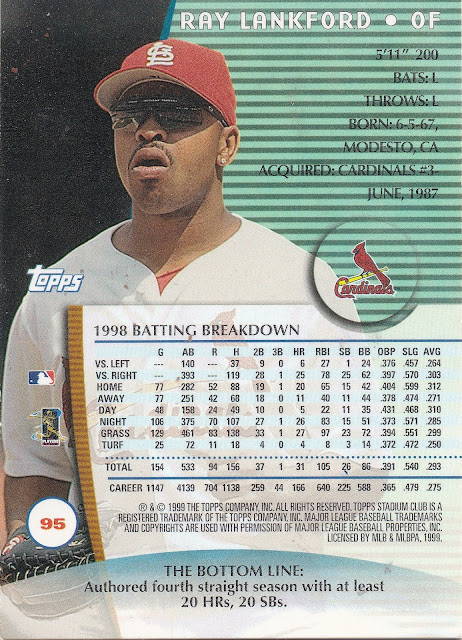 Stadium Club cards did not have a consistent back design.  Some are better than others.  The 1999 set actually ranks pretty high on my list.  I like the larger color photo of the player on the back, which is also used as the background on the player stats box.  The photo is slightly muted in that area of the card, but you can still see the Cardinals logo on the front of the jersey.

I like the split stats on the back showing home vs. road, left vs right, etc.  Feels like a card back would appear on a more recent set of baseball cards.  A baseball card with OBP before the book MoneyBall was published?

Ray Lankford could draw a walk.

This Stadium Club is one of my favorite Ray Lankford cards from the late 1990s.  Two 1999 cards in a row, I will use a different year next week when I post another Random Ray.

Posted by The Snorting Bull at 4:50 PM