I promised an updated checklist before the end of October and here I am, following through. I am actually making this post because I am procrastinating on things that I should be doing to get ready for my return to work tomorrow.  As a year-round teacher, I have enjoyed being tracked-out the past few weeks.  Definitely needed the break.  On to baseball cards.

I have three more 1964 Topps Giants cards to post today.  This has not been too difficult of a set to pull together so far, but there are a few short-prints.  I have them labeled on the checklist.  I have picked up two of them so far and added another a few weeks back.  The short-prints in the Topps Giants set aren't too hard to find in most cases, they just cost more than what you'd think.

Here is my latest short-printed card. 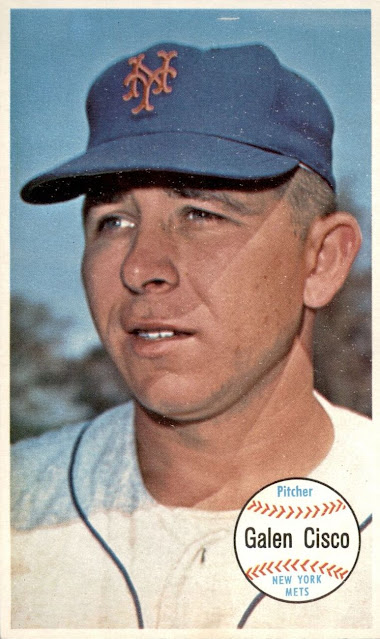 I know Galen Cisco more for being a pitching coach for the Blue Jays and Phillies than as a player. He had a short career that was most spent with the expansion Mets.  He played 7 seasons in the Majors with a career win-loss record of 25-56.  Thanks, Mets.  In 1964, Cisco had an ERA of 3.62 and lost 19 games.  Ray Sadecki, a pitcher for the Cardinals, had an ERA of 3.68 and won 20 games.  Sadly, Galen Cisco's career ended when he ended up on the expansion Royals team in 1969.  Should probably be a rule that you can't end up on two first-year expansion teams during your career.
Nice photo on the front of the card. 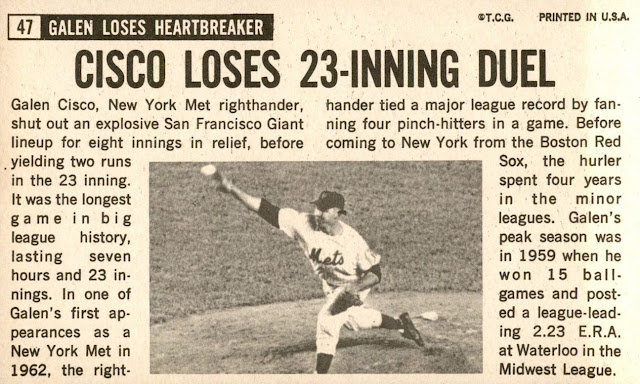 I really like this card back.  I have complained about the heavy focus on the Minors on other posts, while that is still mentioned on the back of the Galen Cisco card, I like that they gave an interesting story about a memorable game.  Pitching 8 innings of relief in a 23 inning loss is way better than hearing about what Cisco did in Double A.  I even went and found the box score.  Willie Mays went 1-10 in the game.

Up next is White Sox pitcher Juan Pizarro. 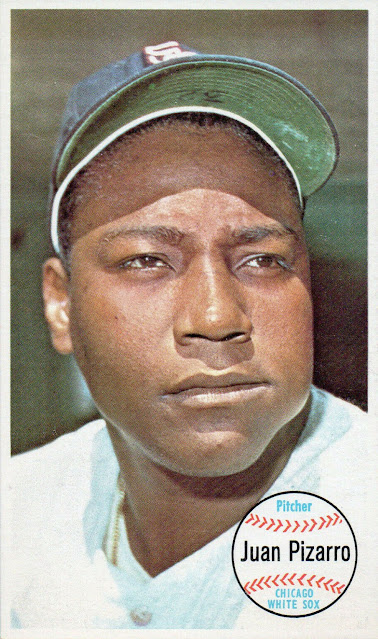 I already have a bunch of Juan Pizarro card floating around my house.  Hardly any of the them are with the same team.  He was Edwin Jackson before Edwin Jackson.  Pizarro pitched 18 years in the Majors and played for 8 different teams. He appeared on the Pirates twice with seven year gap in between. Pizarro was traded to the Reds during the 1960 off-season, but the Reds traded him to the White Sox later on the same day.  In 1970, he went to Spring Training with the Angels, did not make the team, and was traded to the Cubs.  Does that count as 11 teams?  Considering his career started with the Braves in the 1950s when there were no expansion teams, also no free agency, that's a long list.
Juan Pizarro reached the Majors as a 20 year-old long reliever/spot starter for the good Braves teams of the late 1950s. He appeared in both the 1957 and 1958 World Series against the Yankees.  The early to mid 1960s were his best years.  Pizarro won 16 and 19 games for the White Sox in 1963 and 1964.  He made the All-Star team both seasons. 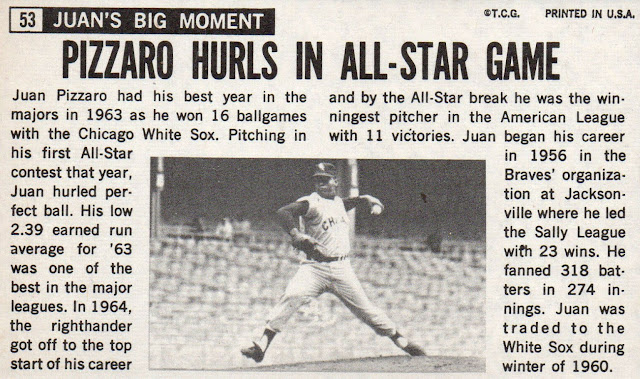 Nice picture of him on the back of the card mid wind-up.  Nice write up about him too.

Last card for this post.  One of my favorite player nicknames from the 1960s. 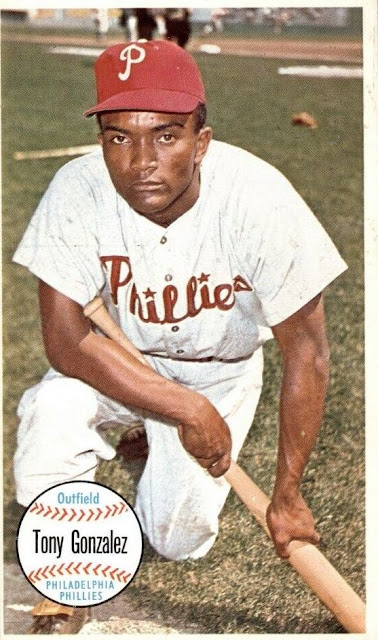 Tony Gonzalez was an outfielder, primarily for the Phillies, and had the nickname "Little Dynamite".  He was small in stature, but had a lot of power and a great outfield arm.  Gonzalez was from Cuba and his parents worked on a sugar cane farm.  As a teenager he was able to lift 250 pound bags of sugar.  A teammate once described grabbing his arm as "touching concrete". 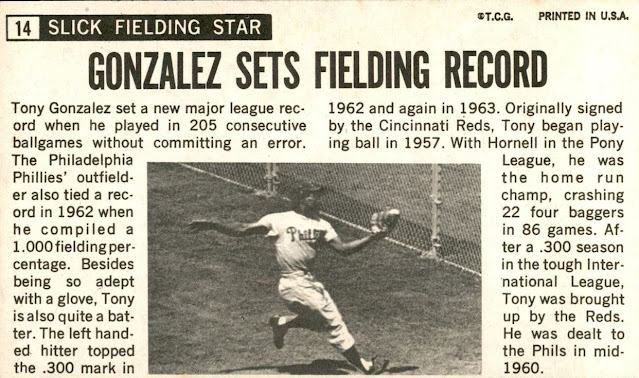 Another nice write-up on the back of the card.  I like the photograph of him running down a fly ball.  The snow cone catch action-shot is not something you see often on older baseball cards.  Is this photo from Spring Training or was there a team in the 1960s with a chain link fence in their outfield?

Maybe the Dodgers when they played in the Coliseum? 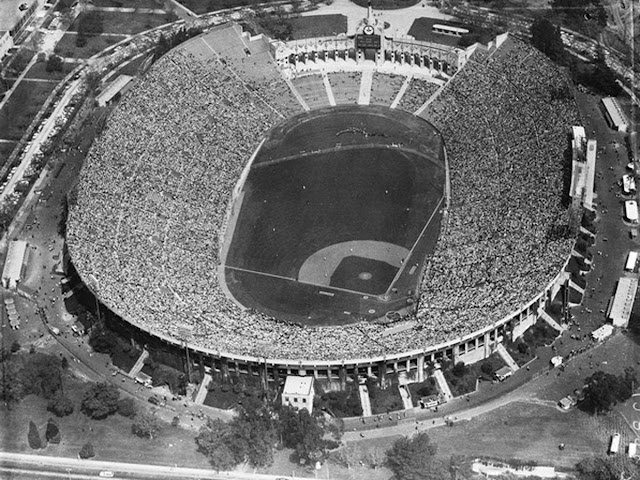 It's the only stadium that comes to mind.