I last updated my 1975 Topps mini Durham Bulls project back in November.  I was down to just eight cards to finish off the "team set" of former Durham Bulls players who appeared in the set.  I already had the big names, Hall of Famers and greats of the era, so I was down to a few commons.

Now, I am down to one common. We'll save that story for the end of the post.

Yes, the cards are mini even if the scans are large. A little blurb about each player is included. 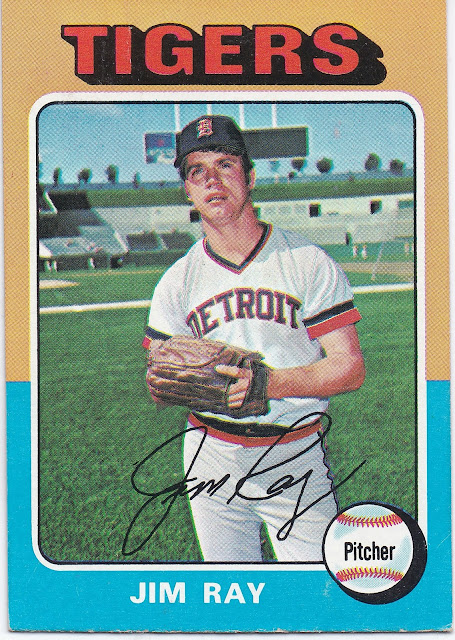 Jim Ray is first up.  He was on the 1965 Durham Bulls as a starting pitcher, but spent most of his Major League career as a relief pitcher.  Pretty good during the late 1960s, threw really hard, and was nicknamed "The Ray Gun".   Ray pitched for the Tigers in 1974, but spent the rest of his career in the Minors.  This is his final card. 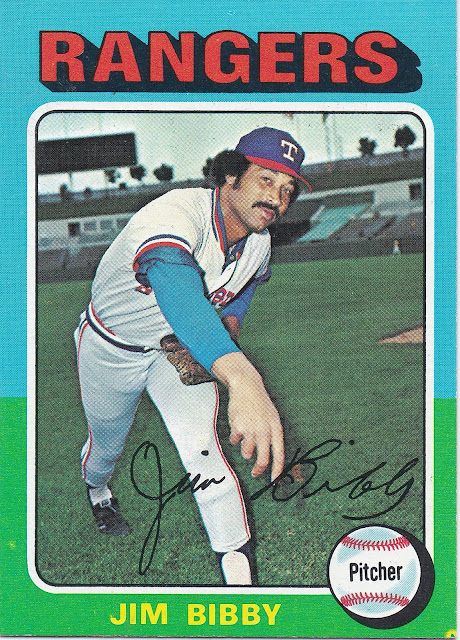 Easily the best player in this post.  I've posted a few Bibby cards before.  He was not only on the Durham Bulls, but also a local player from Franklinton, North Carolina and attended Fayetteville State University for college.  Bibby played for the 1968 Raleigh-Durham (it's an airport) Mets.  He had been out of baseball the two prior years serving in the Vietnam War.  Bibby played a total of 12 years, won more than 100 games, which included being a starting pitcher on the 1979 World Series winning Pirates team. 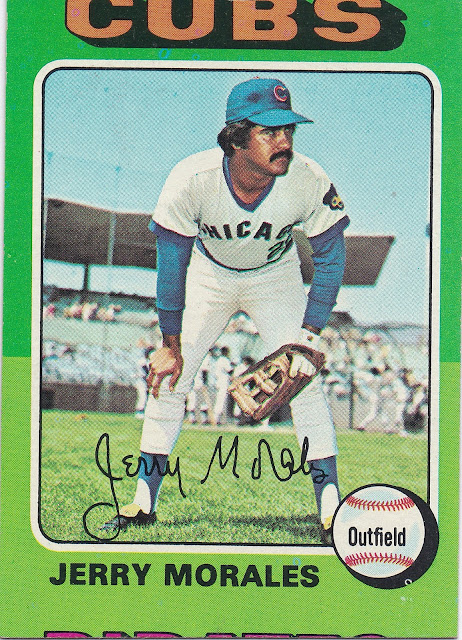 I was a little disappointed with this card.  I bought it off of SportsLots, but it is clearly not in "Mint" condition.  Overall, a little disappointed with my recent experiences with SportsLots.  More on that later in the post.  I will find another copy of this card at some point.  Morales played for the 1968 Raleigh-Durham (airport) Mets, but spent the majority of his career with the Cubs.  He was long-time coach with the Dodgers and Expos after retiring. 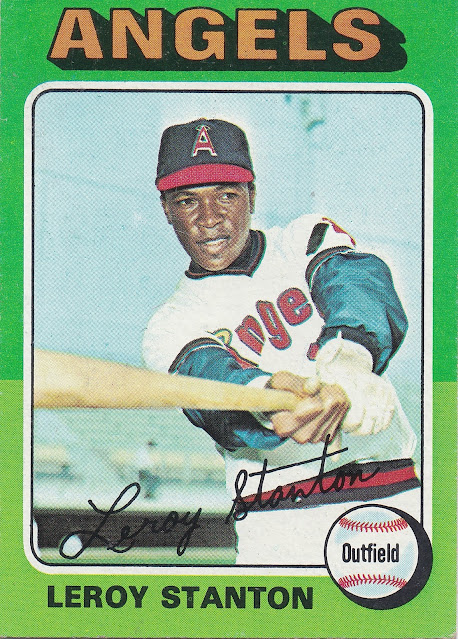 Leroy Stanton was on the 1968 Raleigh-Durham (airport) Mets.  He played roughly a decade in the Majors and had some good years along the way with the Angels and Mariners.  Probably most noted for being traded with Nolan Ryan from the Mets to the Angels for Jim Fregosi, but was also an original member of the Seattle Mariners in 1977.  In fact, he led the team in home runs and RBIs during their first season. 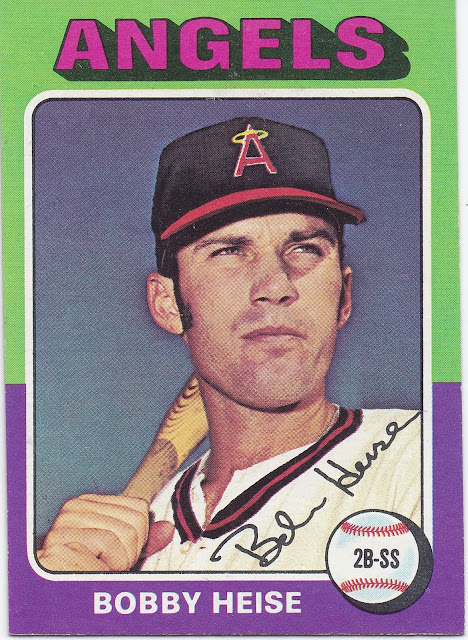 Bobby Heise was on the 1967 Durham Bulls.  The first year the team was a Mets affiliate, also the last year before the Mets decided that the team should be renamed after an airport.  Bob played on 7 teams in 11 years.  I could tell you his career slash line, but let's just say that even his slugging percentage is under .300 (that's really bad).  Something nice about Bob?  He could play all the infield positions.  That's all I got. 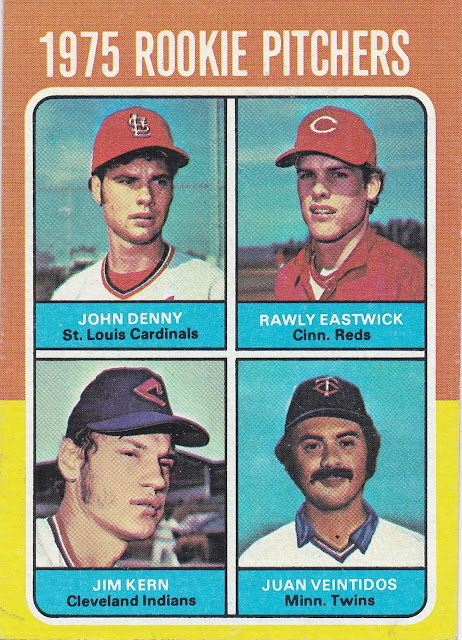 I was excited about John Denny's rookie card, but he did not play for the Durham Bulls.  He did lead the National League in wins during the 1983 season.  Nope.  I bought this card for Rawley Eastwick who was on the infamous 1971 Raleigh-Durham Triangles.

I need to do more research into why people in the late 1960s and early 1970s decided to go away from just using the Durham Bulls name.  Anyway, back to Rawly Eastwick.

Rawly Eastwick led the National League in saves twice while pitching for the mid 1970s Cincinnati Reds.  Relievers weren't a huge deal back in the 1970s, but Eastwick was a good pitcher. Won two World Series rings with the Reds.

This was actually a pretty tough card to find.  There are no short-prints in the 1975 Topps mini set, so I am not sure why there are not many of them on Ebay or COMC. 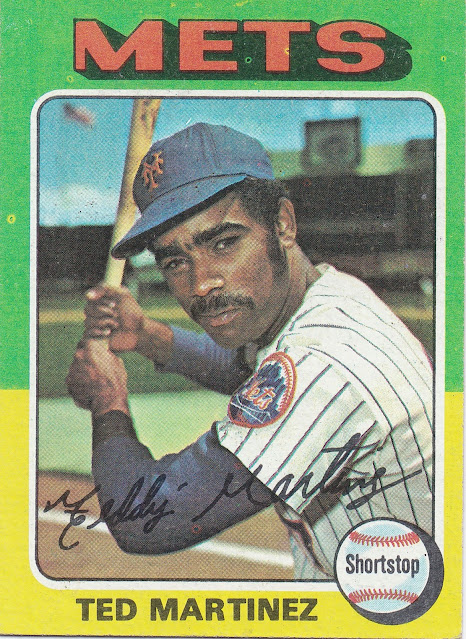 Ted Martinez was on the 1968 Raleigh-Durham Mets.  He was in the Majors for 9 years, mainly as a utility/bench player. Apparently, he was a favorite interview of Ralph Kiner's during pre and post game radio shows for Mets broadcasts.  As the story goes, Ted did not speak much English, but it was okay because Ralph did not speak much Spanish. I can't find a clip, but apparently they were pretty fun together.

Here is the Pat Darcy card that showed up in my mailbox. 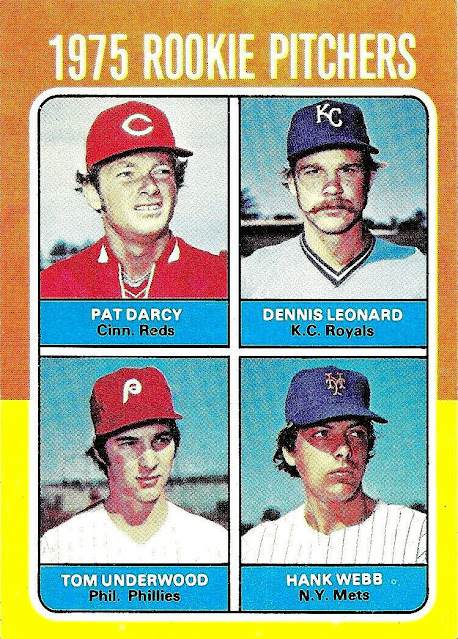 At the beginning of the post, I had stated that the cards were all Minis even though the scans were giant.  Not true here.  I bought a Topps Mini of Pat Darcy off of Sports Lots, but I was sent a regular 1975 Topps card.  I got a refund, bought a second copy, and it appeared to be headed to my mailbox last week.  It was supposedly delivered in the morning last Thursday, but my mail does not show up until late in the afternoon.  It did not show up in the late afternoon, or the next day.  I asked my mail carrier about the package, gave him the tracking number, but all I got a shoulder shrug.

Maybe the third time buying a Pat Darcy card will work out better than the first two times.

Posted by The Snorting Bull at 1:50 PM