As a Minor League baseball fan, inevitably all of your favorite players are going to leave. Minor Leaguers get promoted to the Majors, get traded, and get released all the time.  Sometimes it is easier to maintain a connection with the player after they have moved onto a different team.  Other times it is a little bit more challenging.

I have spent a lot of time lately trying to process the Blake Snell trade from the Rays to the Padres.  I was expecting him to leave at some point, not exactly the type of player that they can afford to re-sign, but this off-season felt a little soon.  I thought I would get at least half a season more of Snell with the Rays.

Snell is one of my all-time favorite former Durham Bulls.  How many autographs of Snell have I posted on here over the past four or five years?  Fifty or sixty something? 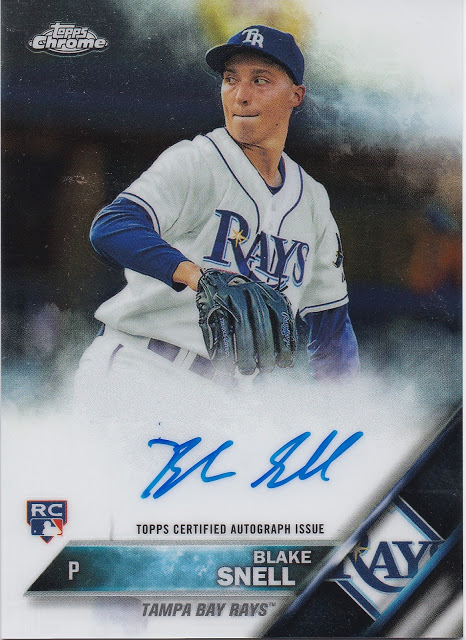 The number is large.

I don't mind the Padres.  There are far worse places he could have ended up.  Do you know how many former Durham Bulls have been on the Cubs the last few years?  I know there was a strong connection with Joe Maddon managing the team.  A little hard to think good thoughts about players like Mike Montgomery and Ben Zobrist while they are beating the Cardinals.

For the moment, I am going to press on with my Blake Snell cards.  I picked up a few inexpensive singles over the past two weeks.  There are still a few Snell autographs from 2020 that I am still missing from my collection, but not going to buy them at their current prices.

Here are the new cards: 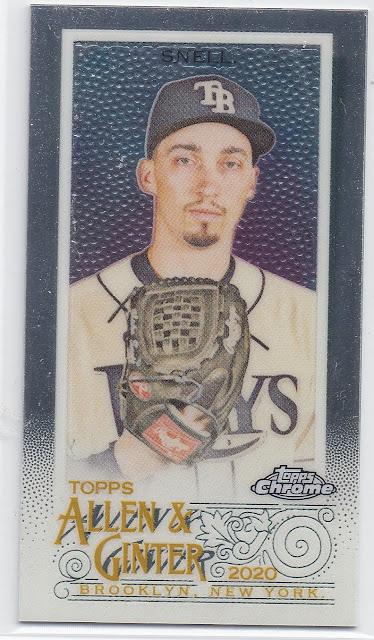 Is there a baseball card product that Topps won't turn into a Chrome product?  You already know the answer.  I really like the coloring on these cards and I am not sure if I own any/many Chrome minis?  Maybe none?  Allen & Ginter always has the white borders and card stock.  The Chrome version has all sorts of colored cards, not sure if I am going to pursue the other Snells.  Probably all depends on their cost.  I am not sure the colored versions of Ginter would looks as good on standard card stock. 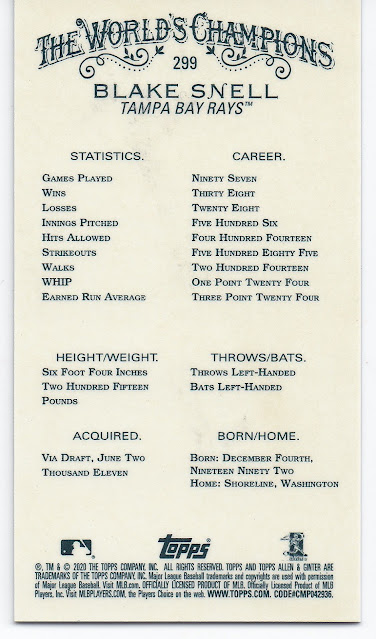 The back of the card is same old Ginter design. 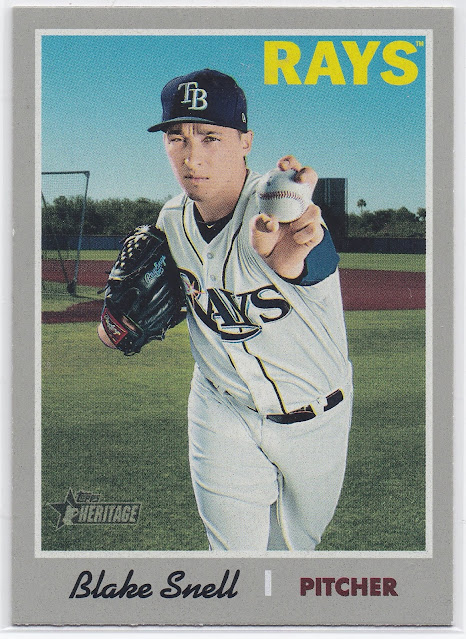 This is a little different card for me.  I know it looks like a regular Topps Heritage card from 2019, but it is actually  one of those gimmicky variations that I am not really into collecting.  Well, sometimes you stumble across one that is not very expensive. 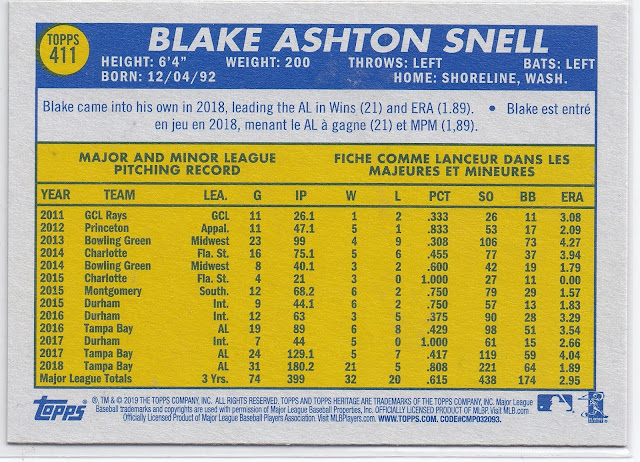 The card is in both English and French.  Did these even appear in the 1970 Topps set?  Feels like it's some sort of salute to O-Pee-Chee.  This is actually one of those variations that I would have noticed if I pulled it out of a pack.  Topps should have put his height and weight in Metric.
Next. 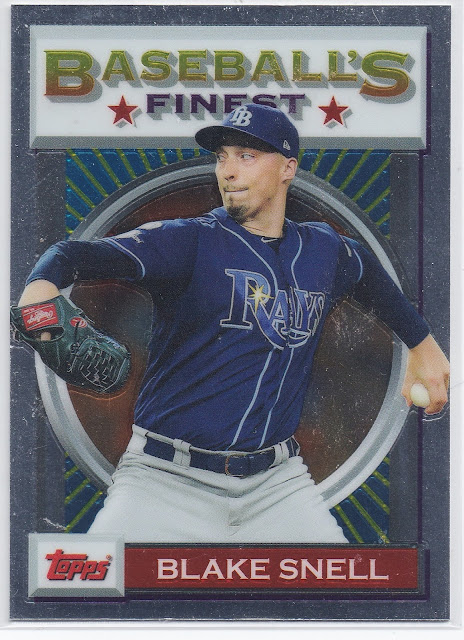 How many times can Topps remake the 1993 Finest set?  It seems like an annual event at this point.  Maybe it's not that often, it just feels that way.  Not scanning the back of the card. 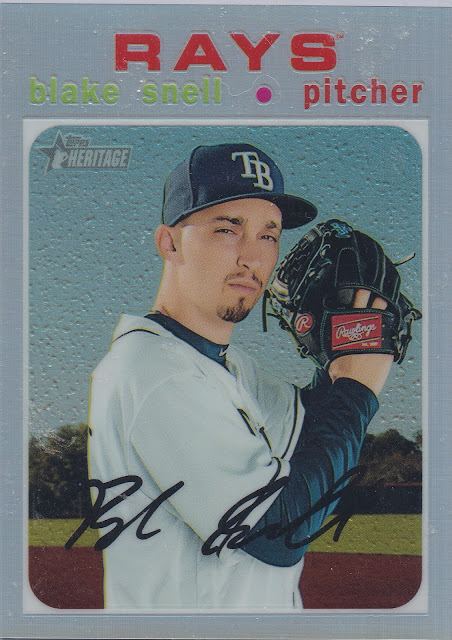 How many different products can Topps make with a Chrome finish?  The answer will eventually be all of them.  This is some Chrome parallel of Snell's card from this year's Heritage set.  I prefer the black borders on the regular base set, but still not a bad looking card. 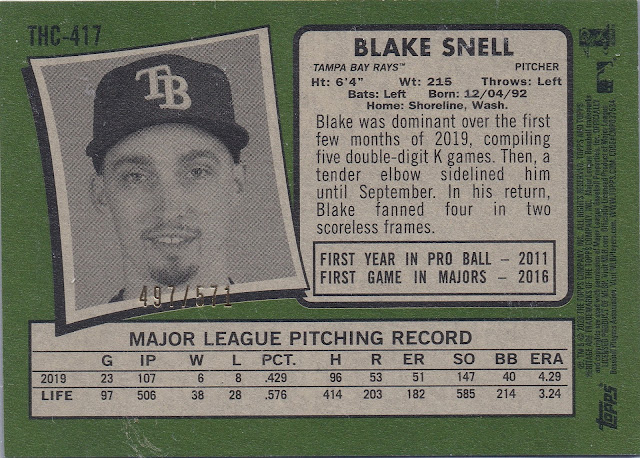 The card is serial numbered to 571 copies.

This is going to be the first of many Blake Snell posts I make in 2021.  Even if I get annoyed with the Padres, still more preferable than the Dodgers, I will just go back and collect all the Rays cards I am missing.

Posted by The Snorting Bull at 8:30 PM