I have been working hard over the past two weeks to find a few more cards from the 1964 Topps Giants set that I am taking on as my first project of 2021.  I posted five cards the other week when I introduced the project, which included Hall of Famers Bob Gibson, Warren Spahn, and Joe Torre.  This week, I have five more cards to cross off the checklist.

Here are my newest additions.  I will start out with the two Hall of Famers I found. 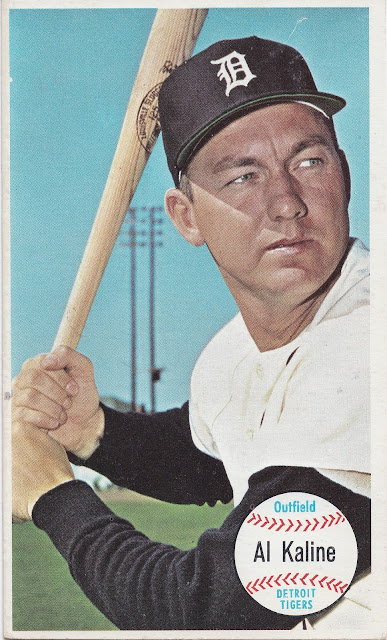 I found the Al Kaline card on Ebay in an auction.  I am still amazed at how little these cards cost in comparison to the regular 1964 Topps cards.  This card was less than $10. 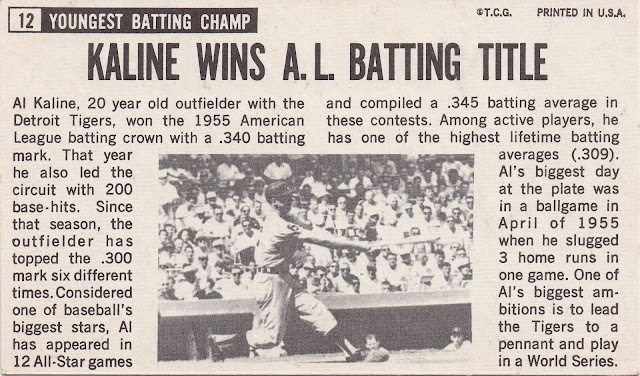 This is a mid-career card for Kaline.  I did not realize that he never played a Minor League game until I looked up the batting title listed on the back of this card.  I thought maybe as a 20 year old he had led the league during his rookie season, but it turned out to be his third year.  Kaline played 22 years in the Majors, but retired before he was 40.

The second Hall of Famer I found the past two weeks is Giants first baseman Orlando Cepeda. 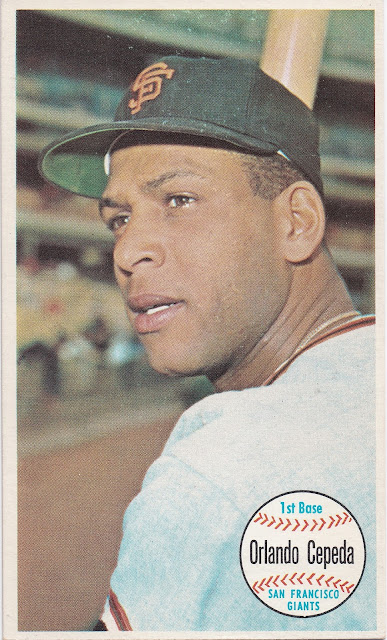 I have a few other Orlando Cepeda cards, but most of them are from his time with the Cardinals in the late 1960s.  I like this posed photo with the shot over his shoulder. 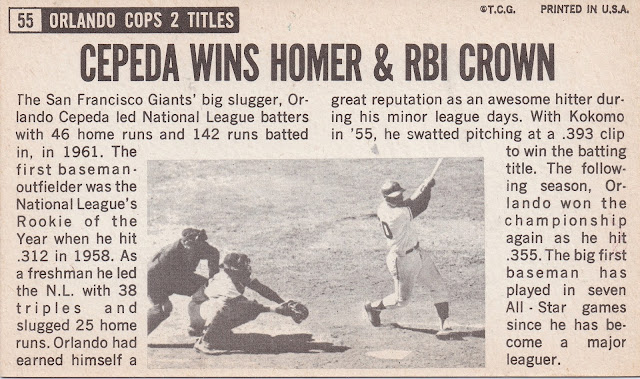 The back of the card has a typo in his stat line from his rookie year.  The card states that Cepeda had 38 triples his rookie year, but that should have read doubles.  "Cha Cha" does not seem like the type of player who hit a lot of triples.  Looking on Baseball-Reference, he had a total of 27 in 17 years.

Last three cards.  A little quicker.  All three of these players would be greats of the era.  They were all All-Star caliber players at some point in their careers, but just not enough to be Hall of Famers. 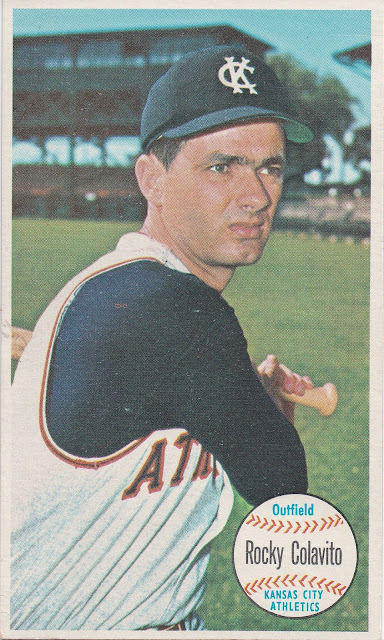 I always think about Rocky Colavito as an Indian or Tiger, but apparently he played one season with the Kansas City A's.  He was an American League All-Star his only season in Kansas City hitting more than 30 home runs and driving in more than 100.  I learned something new. 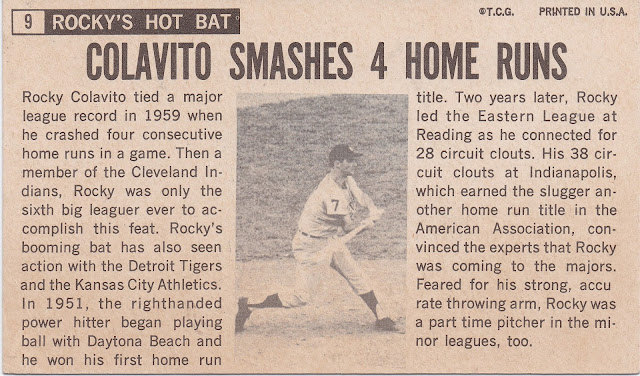 He hit four home runs in a game before Mark Whiten. 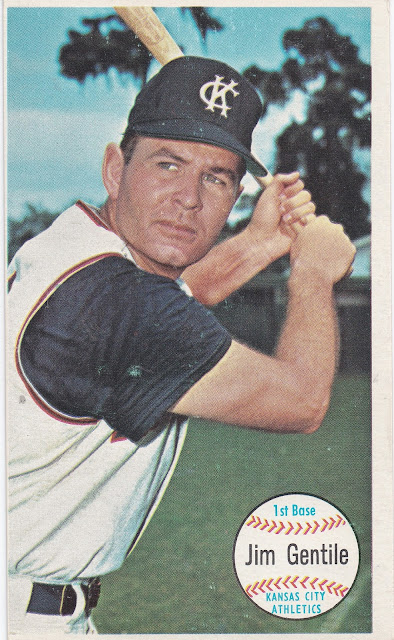 I did not know much about Jim Gentile before buying this card.  I have an old Cadaco disc of him from the All-Star Baseball Game.  That's most of my exposure to his career.  Gentile had a short career, but had some great seasons, especially early in his career with the Orioles.  In 1961, he hit 46 home runs, drove in 141 runs, and had a .646 slugging percentage.  If it were not for Mickey Mantle and Roger Maris, he would have likely won the MVP Award that season. 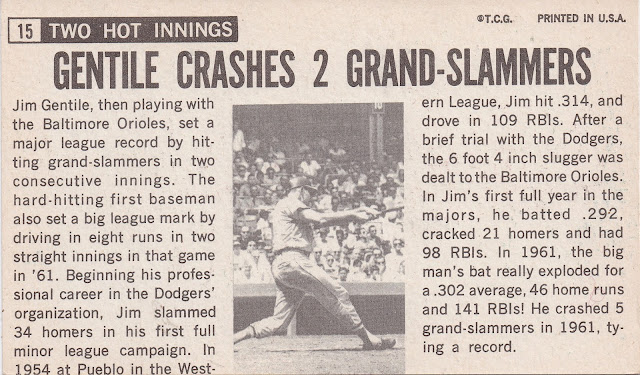 The centering on the card is off on this card.  On the front scan, you can see the card is off left to right.   On the back, the print looks a crooked.  This was a really cheap card, so I might upgrade to a better copy if I can find it cheap enough.  Not a high priority, but still will put it on my list of things to do.
Last card. 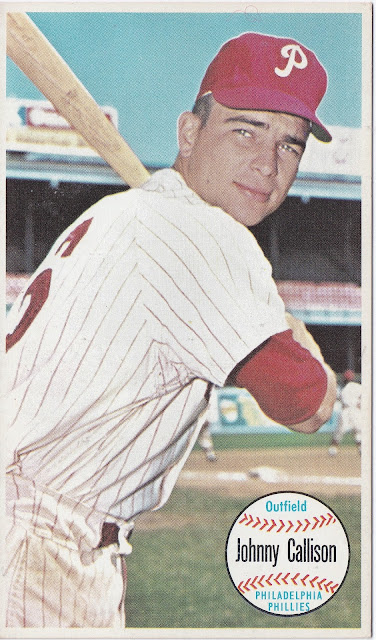 Callison was a good player for the Phillies during the 1960s.  One of the eras "What if...." players.  He was an athletic outfielder from Oklahoma with some pop in his bat, so he naturally got branded the "next Mickey Mantle".  Callison was an extra base machine, hit his fair share of home runs, but also lots of doubles and triples.  According to the Phillies people on the internet, he was also about the only player on the 1964 team who did not completely tank during the last few weeks of the season.  Leg injuries wrecked his career along with vision problems. 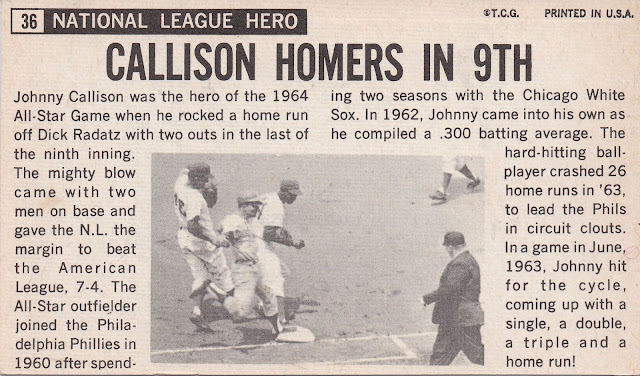 The back describes his home run in the 1964 All-Star Game off of Red Sox pitcher Dick Radatz, which was Callison's defining moment in the Majors.
My updated checklist.  Ten cards down, fifty to go.

Posted by The Snorting Bull at 9:41 AM