Not Just Any Team Set

I have been on a roll with finding some tough Durham Bulls team sets and cards during the past year.  My best find up to this point was the first half of the 1997 BellSouth Bulls to Braves set, which celebrated the team's long-running affiliation with the Atlanta Braves.  The cards have proved nearly impossible to find over the years as single cards, and I had never seen them together in any sort of a set before them last fall. 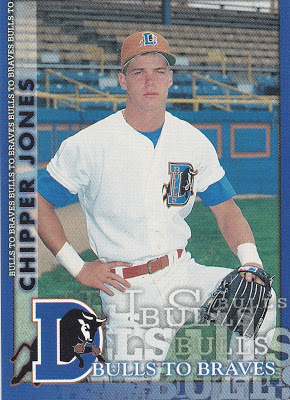 I was able to find another really tough team set two weeks ago.  I had been looking for a team-issued Durham Bulls from 2001, but could not even find evidence that such a set existed until 2015 when the set was finally added to the Trading Card Database.  To this day, there are only pictures of a few cards from the set.

First edit date on Trading Card Database was May of 2015. 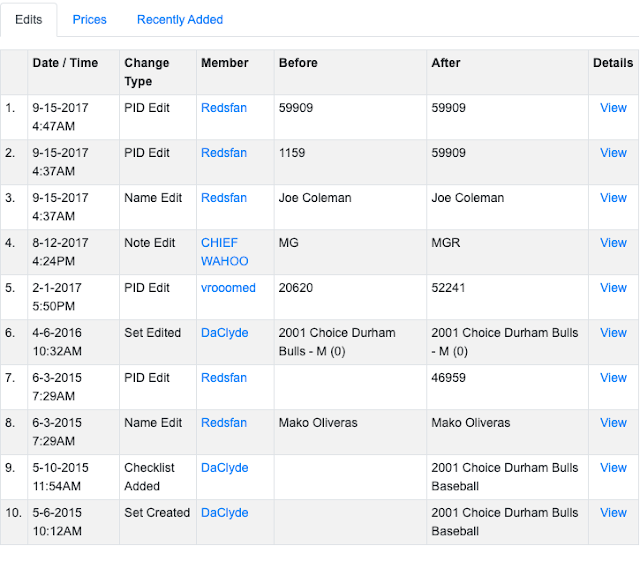 Even though the set first appeared on TCDB in 2015, it has not shown up on Ebay until this year.

There are always a lot of Major League players who appear in Triple-A baseball card sets, but this set feels like it's above average in terms of quantity.  Here are the cards, starting with the team checklist. 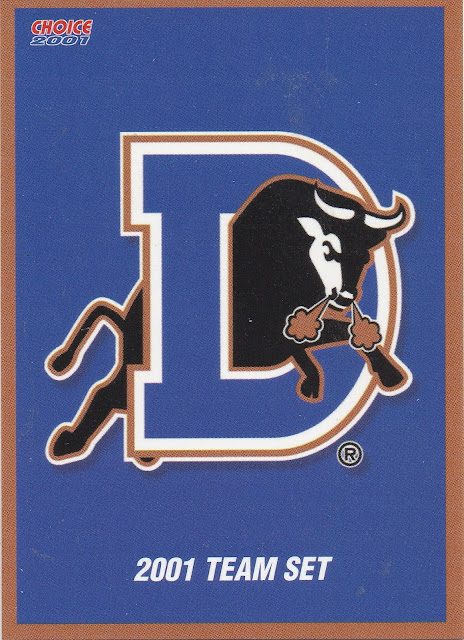 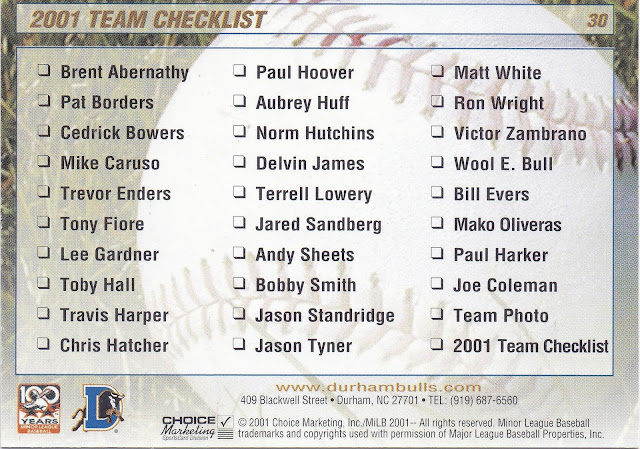 Out of the players with cards in the set, only Norm Hutchins did not appears in the Majors.  The set has a few players with World Series rings, including a World Series MVP.  Also included is a guy who is now a pharmacist, a one-time billionaire who is now bankrupt, a future Durham Bulls manager, and an International League Hall of Famer.

Here is the basic design of the cards using Brent Abernathy. 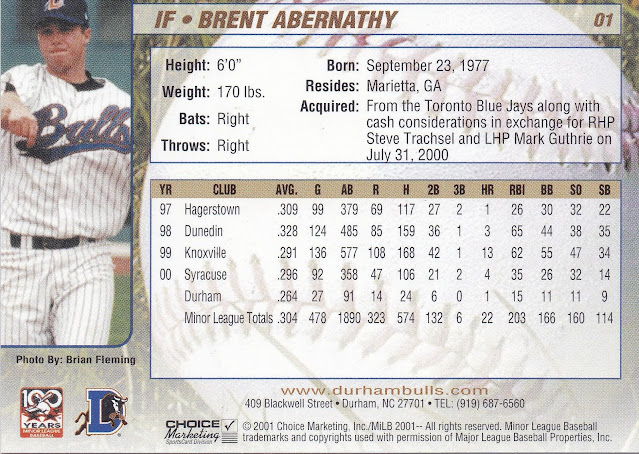 I like that the team put the "Acquired" information on the back of the card.  Feels a little bit like the old Donruss cards.  Plus with Minor Leaguers, you know half of them were traded for Major Leaguers.  Always fun to see some of those names, like Steve Trachsel.

Here are the rest of the player, coach, and manager cards.  Also Wool E. Bull, the mascot.

I am not going to talk about every player. 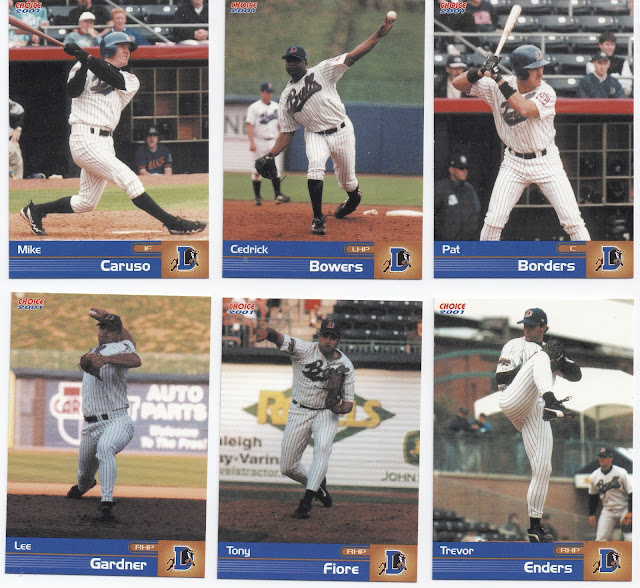 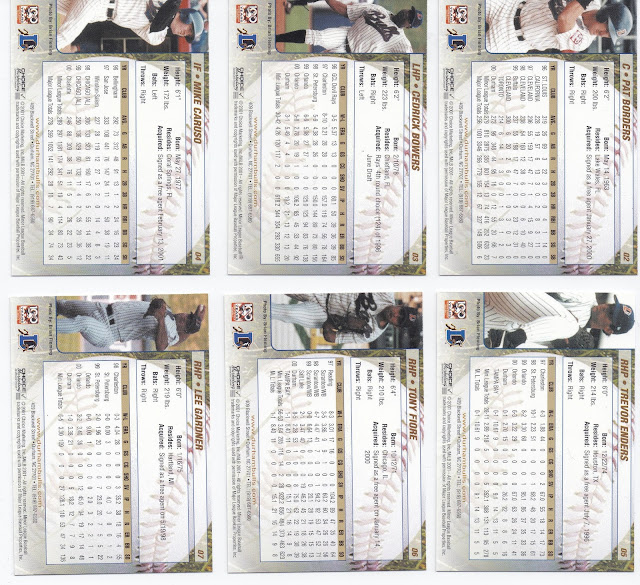 Two notable names in this group of cards.

Pat Borders was at the end of his career at this point.  He was nearly 40 years old.  Borders was on the two Blue Jays World Series winners in the early 1990s and won the World Series MVP in 1992 against the Braves.  He played until 2005, retiring at the age of 42.

Lee Gardner was in Triple-A for 8 years, 5 of those seasons were with the Durham Bulls.  He is in the International League Hall of Fame and I believe he is the Durham Bulls all-time saves leader. 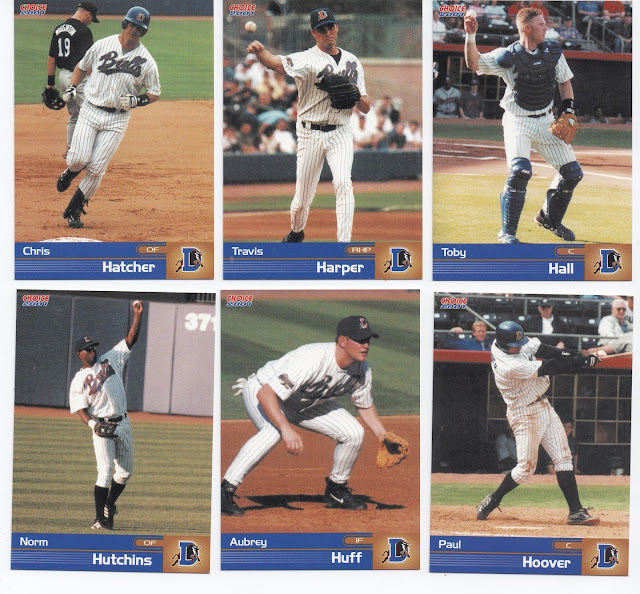 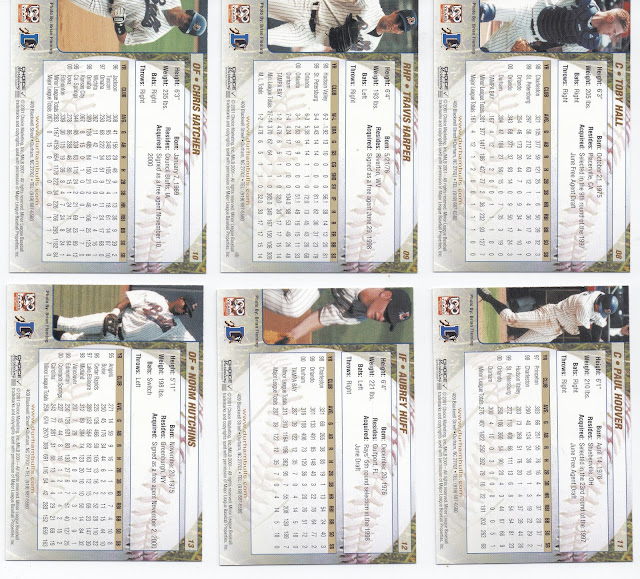 Two more notable players in this group.  Huff won two World Series with the Giants.  Toby Hall was in the Majors for a few years but was a really good Minor League player.  He was in Durham for roughly 3 years and is considered one of the best catchers to have come through town.  Strictly talking about Minor League numbers with Hall. 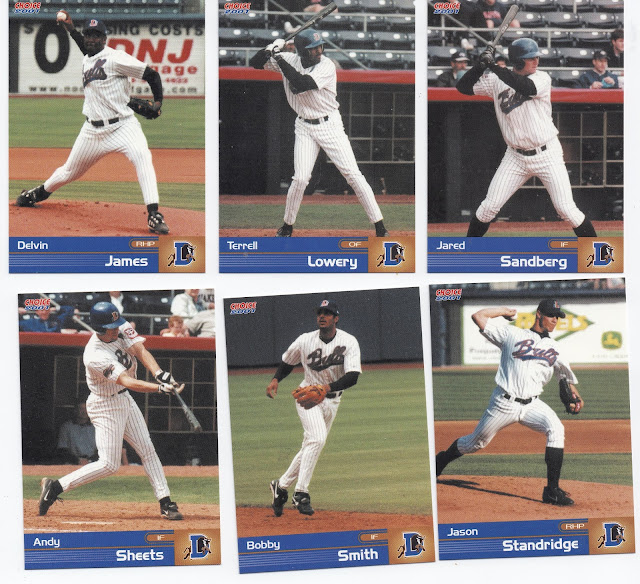 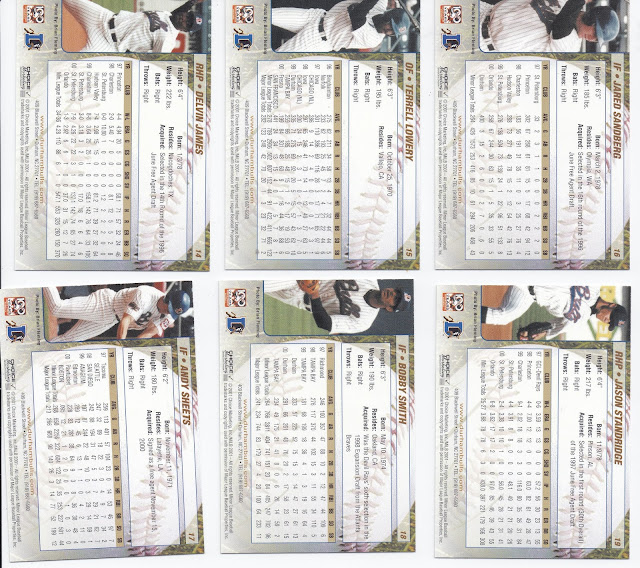 Jared Sandberg is Ryne's nephew and he managed the Bulls for four years.  In his last two years as the manager of the Bulls the team won the International League Championship. 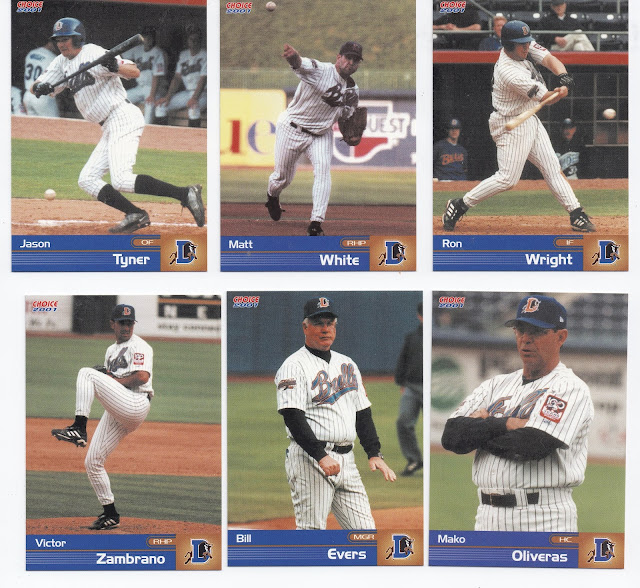 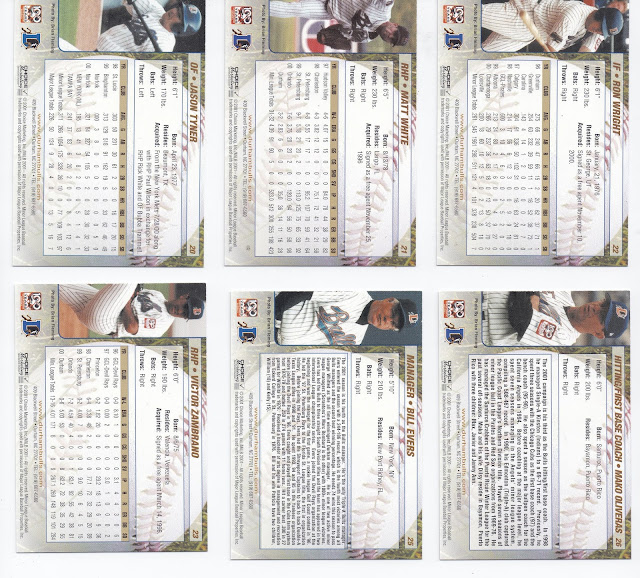 Now, this is a good group.

First, we got Jason Tyner.  Jason Tyner was a fan favorite in Tampa.  Scrappy player.  He ended up getting his own bobblehead day with the Rays.  The problem is that he was demoted back down to the Bulls before it was given out.

Is it too late to get your money back?

Matt White owned a couple billion dollars worth of Goshen Stone at one point.  Goshen stone is used for swimming pools, kitchen counters, and landscaping.  It currently costs $75 to $150 per ton.

How did this happen?

White had an elderly aunt who lived in Massachusetts and needed $50,000 to get into a nursing home.  She sold White some land she owned in a rural part of the state.  White wanted to build a house on the property, but after checking with a builder, the land was too hard.  He called a surveyor who found 24 million tons of Goshen rock on the property.  Rather than settling for part of 2 billion dollars by selling the land to a company that could process the rock, Matt White tried to start his own company.  The company went bankrupt.  He was forced to sell the land for a fraction of its value.

Ron Wright played in one Major League for the Seattle Mariners in 2005.  He retired and went back to college.  Wright studied pharmacology and now works as a pharmacist in Portacello, Idaho.

Bill Evers is the second-winningest manager in team history.  For a long time, he held the record but was passed by current Blue Jays manager Charlie Montoyo.

I have wanted to write about Mako Oliveras for a while.  I have several of his cards, low-key really important player and coach. 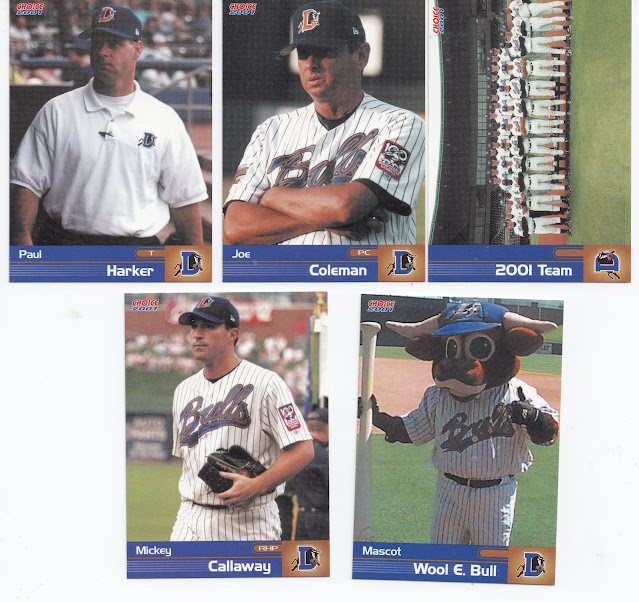 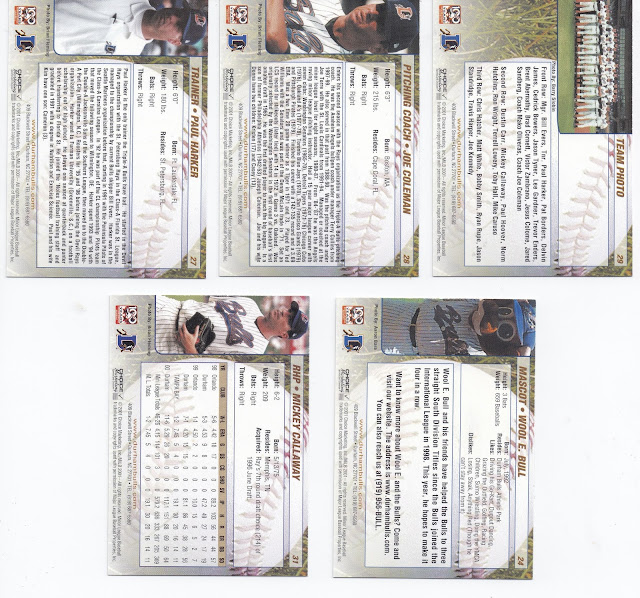 Joe Coleman was a pitching coach forever, including for the Cardinals while Joe Torre was managing the team.  Mickey Callaway was the Mets manager and the pitching coach for the Indians and Angels.  He is currently unemployed for good reason.

Wool E. Bull.  What would he say about this card?

Posted by The Snorting Bull at 2:13 PM