It's truly amazing how many former Durham Bulls players and managers have gone on to work as a managers in the Major Leagues.  Last season, there were two former managers, Charlie Montoyo and Brian Snitker, along with two former players, Kevin Cash and Rocco Baldelli, who were all managers with Major League teams.  All four led their teams to the playoffs.

This is not a new trend with the Durham Bulls.

Just in the past week, I have posted cards of Doug Rader and Mayo Smith.  Both were Durham Bulls players and both had stints working as managers in the Majors.  For today, I am going to focus on a different player/manager, spending a little time on Gene Mauch.  I have picked up a few cards of this well-known manager over the past few weeks.

Mauch played with the Durham Bulls in 1943 as a 17 year old infielder.  He would play in the Majors for 9 seasons with the Dodgers, Cubs, Braves, Cardinals, and Red Sox.  He was a light hitting utility player, who only once played in more than 70 games in a season.

Mauch has a few cards as a player. 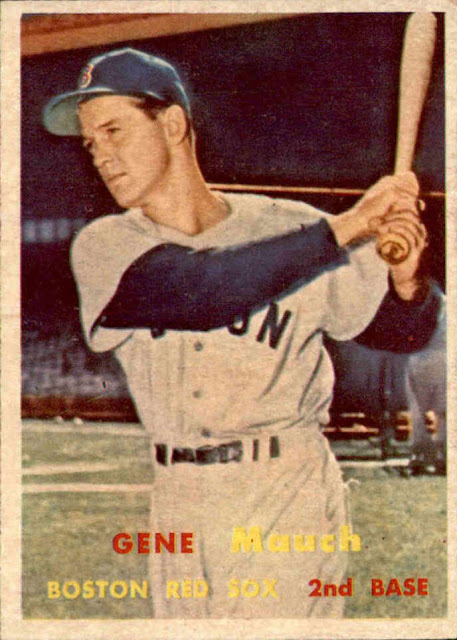 I haven't been too successful with collecting his player cards.  This 1957 Topps might be about it.  Really, we are here today for his manager cards.  So, these are the latest additions to my collection: 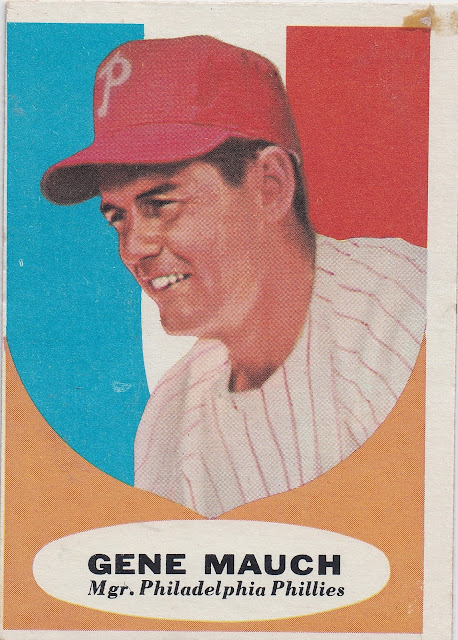 Mauch's first managerial job in the Majors was with the Phillies starting in 1960.  He took over a perennial loser and turned them into a winning team.  It just took a few years.  In 1961, the Phillies lost 107 games, which included a 23 games losing streak.  Mauch has this sort of dubious reputation as a manager in some circles.  The long losing streak in 1961 is apart of that reputation.
The back of the card has his player stats, with his managerial stats squeezed onto the bottom. 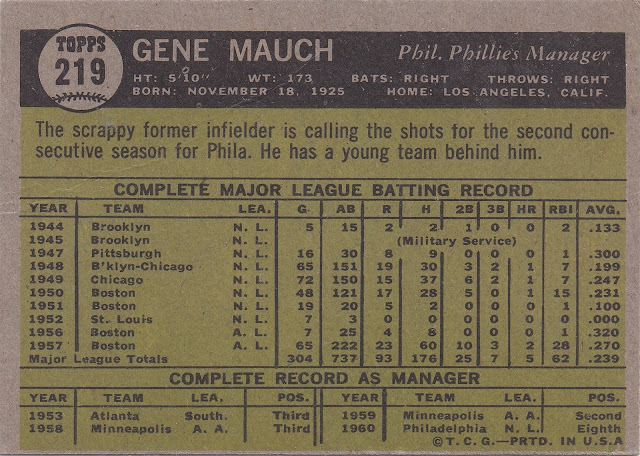 I thought it was interesting that his Minor League managing record was included here.

Next up is Mauch's burlap sack card from the 1968 Topps set. 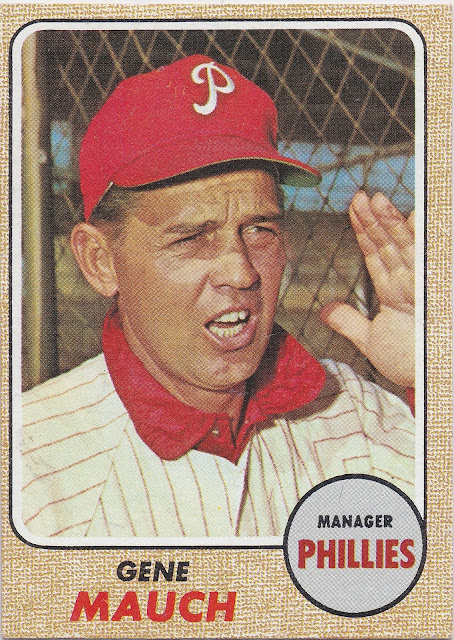 This was Mauch's final season with the Phillies.  In fact, he did not make it the whole season.  The team fired him after a 28-27 start to the season.  In learning more about Mauch in recent years, it somewhat surprises me that he last another three and a half years after the 1964 collapse.  I am not going to rehash the last two weeks of the season, but he made a few mistakes.  At the same time, his six winning seasons with the Phillies during the 1960s were one more than the team had during the 1950s, 1940s, 1930s, and 1920s combined.

The first three quarters of the 20th Century were not kind to the Phillies.  Mauch was the team's winningest manager until Charlie Manuel passed him 2011.

The back of this card actually mentions that he played for the Durham Bulls in 1943. 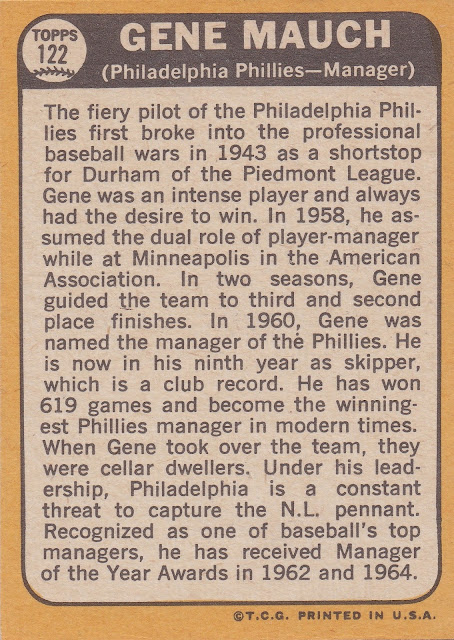 A pair of Expos cards.  I already have a few Mauch Expos cards from the fake pizza franchise promotional set I worked on last year.  Still a little upset that there is not really a La Pizza Royale restaurant in Canada. 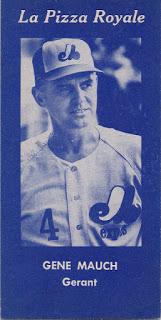 If I ever flee to Canada to start a pizza place, that's going to be the name of the restaurant.  Still really cool cards.  Yes, I still have them.

These are not fake. 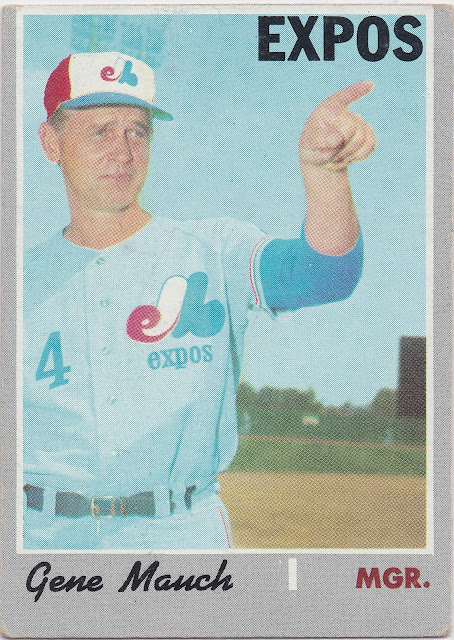 First up is Mauch's 1970 Topps card.  He was in the 1969 Topps set as the Expos manager, so this is his second as their manager.  It looks like Mauch is signaling for a new pitcher, but given that he was managing an expansion team, it is just as likely that he was hailing a beer vendor. 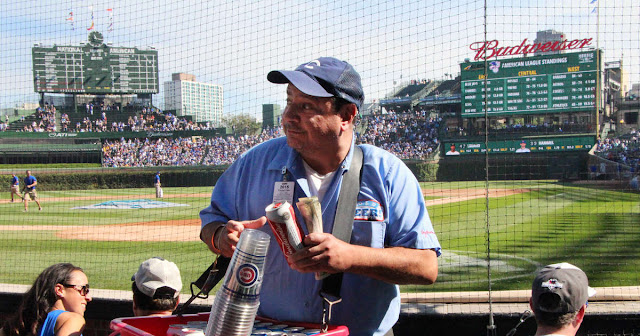 The back of the card is slightly off-center. 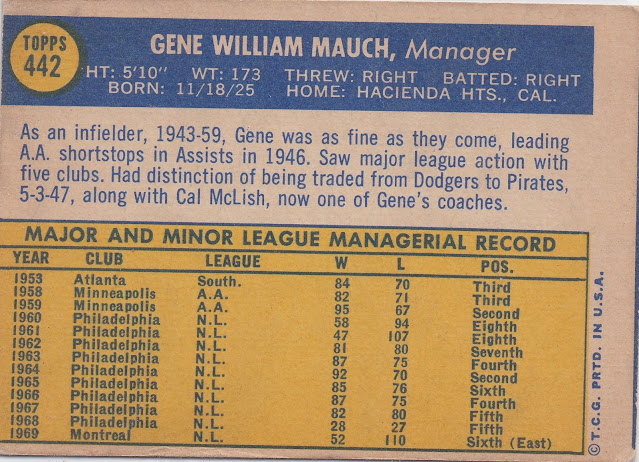 I like the manager's cards where Topps went with the managerial records much more than the player records.  I also like that they included his Minor League experience as a manager, which was a surprising feature on the 1961 Topps towards the top of the post.  Topps also makes mention of his Minor League playing career at the top of this card, but nothing specific about the Durham Bulls. 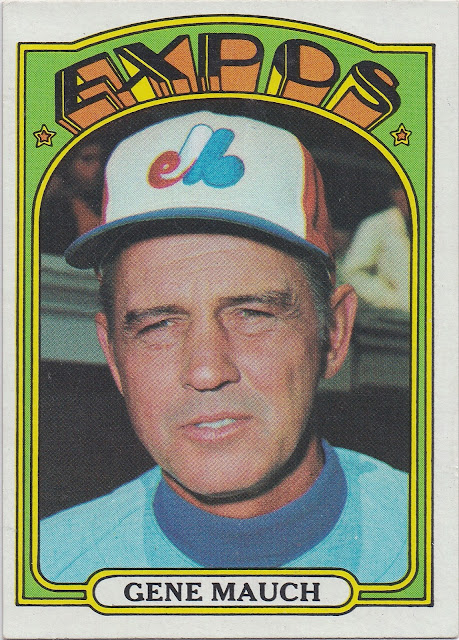 Love the design on the 1972 Topps cards.  Mauch was 47 when this card was made, but managing the Phillies and expansion Expos aged him horribly.  There is also something not quite right about the front of his jersey in this picture.  It looks like Topps airbrushed it, but I am not sure why they would do such a thing.
Back of the card has a cool fun fact about catchers and foul pop outs. 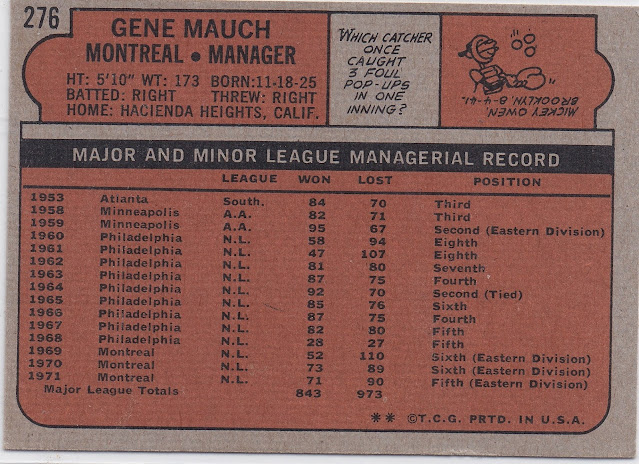 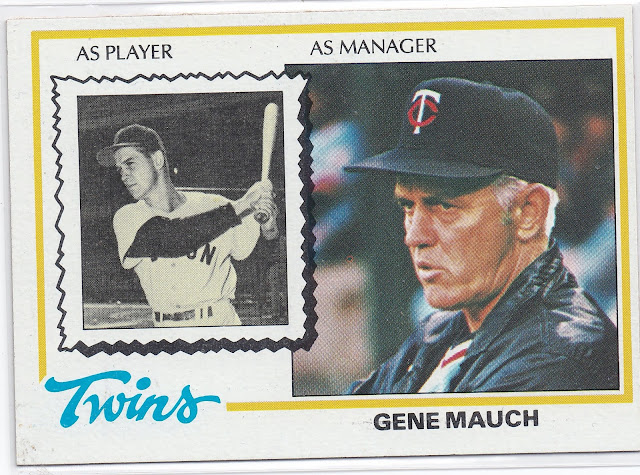 I like these 1978 Topps cards with the player and manager picture on the front of the card.  Currently, there are a ton of catchers who are managing teams.  They have slowly taken over from utility and bench players who were frequently managers during the 1970s and 1980s.  At least, that's how it seemed at times. 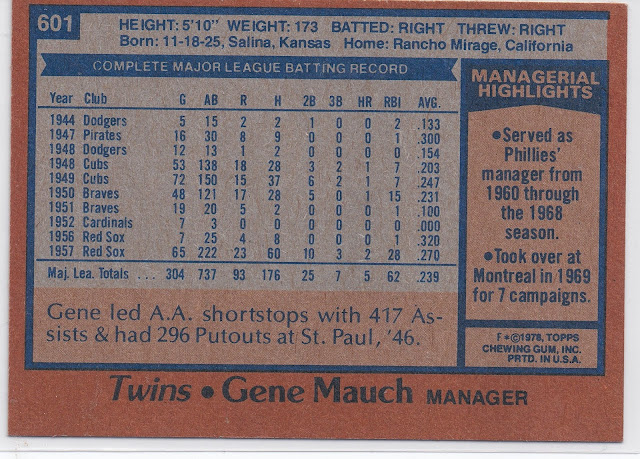 And we are back to this odd mix of player stats on the back of a manager card.  We get it, Gene Mauch was not much of a player.  There are a lot of people who don't think he was much a manager either, but I he stuck around a long time, even if he did not manage to the win a World Series.

Posted by The Snorting Bull at 9:19 PM