I have done 44 of these posts, and I have not touched a single Minor League card before this post.  I figured it was time to search through the Minor League card box and find a good 1980s Cardinals player before they got the Majors.  The Coleman card in today's post is a favorite.

I have a few 1980s Cardinals players on Minor League cards, probably not a really deep part of my collection though.  I actually think my favorite Minor League card of a 1980s Cardinals player in my collection is not even with a Cardinals affiliate.  I am sharing it anyway really quick.  I picked this up at a card show for a $1 a few years back.  This is a 1976 Phoenix Giants Jack Clark card. 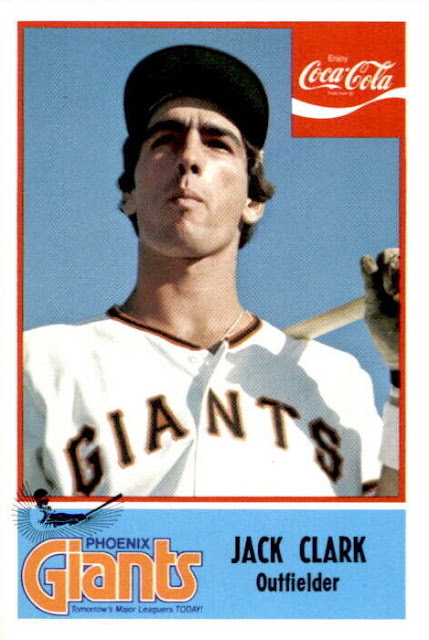 Love the little motto and logo at the bottom of the card.  That alone made me want to buy the card.

Back to Vince Coleman.

There are a few different Vince Coleman Minor League cards, but this Riley's Louisville Redbirds card is a pretty easy to find, and generally inexpensive.  I am not sure if these were a giveaway, or if they were sold as a set at the team store.  Either way, they are plentiful, and these sets ran throughout the 1980s. 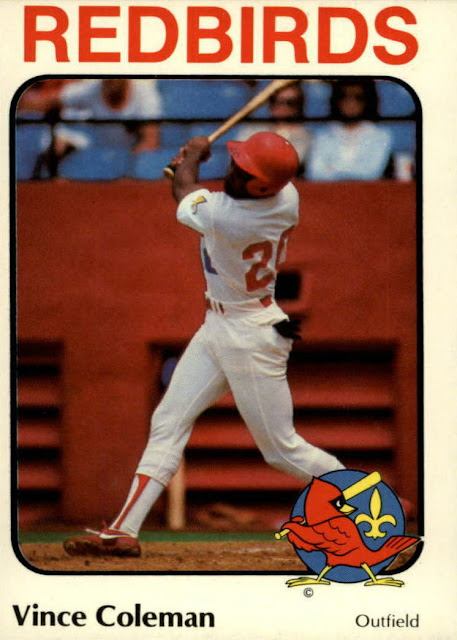 The Riley's cards all have similar designs, regardless of year, and most of the position players have action photos of them batting with this weird red thing in the background.  Not the most attractive stadium, so I get the tight crop on the photos.  I went to a Louisville Redbirds game once in middle school.  It was an odd stadium that doubled as the football field for the University of Louisville.  It had a baseball grandstand, but football seating in the outfield.

This is the best picture I could find. 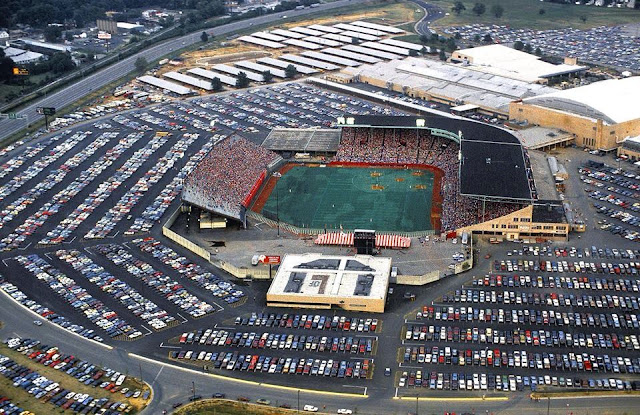 Looks a little bit like the old Blue Jays stadium before they moved into the SkyDome.

The back of the card has a small dissertation about Vince Coleman, but it's actually pretty good information.  Sometimes wordy Minor League cards can stray into all sorts of useless information.  I like that I can now tell people Vince Coleman's college major. 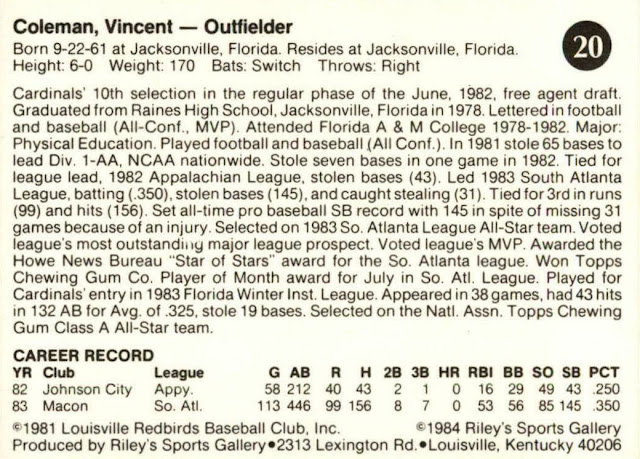 Tangent about a fact on the back of the card, and something cool I found last week.

All Cardinals All The Time commented on my post last week about Coleman's athletic prowess in college, which is also talked about here on the back of this card.  Coleman played baseball at Florida A&M, but was also the kicker on their football team.  I did a little digging to see if he was any good.  Not really any consensus, but that probably does not really matter.  What does matter is that in 1979, the Miami Hurricanes had a really bad week against Florida A&M, and got upset by the score of 16-13.

The deciding play in the game was a late fourth quarter Florida A&M field goal.  Who kicked the field goal?

I love that he runs at the football straight on.

The other thing that pops out for me on the back of this card is his 1983 stolen base numbers at Macon, which would have been an A Ball team.  Coleman stole 145 bases in just 113 games.  That's an insane amount of stolen bases.

Second week with a Coleman card, I will pick someone different next week.

Posted by The Snorting Bull at 8:13 AM