During Girl Scout Cookie season, all of your family and work friends with girls in the scouts spend weeks pushing overpriced, five dollars boxes of cookies in your face telling you their daughter needs a badge. When you go to the grocery store on Saturday afternoon, because your wife forgot buy Italian parsley when she was at the store earlier in the week, you will get hounded again with $5 boxes of cookies.
No matter how many different types of cookies are on the order sheet, or how many boxes are stacked up on the table, we all know that there are only a few Girl Scout Cookies that are worthy of the $5 sticker price. Will I pay $5 for a box of Thin Mints, Peanut Butter Patties, or Caramel deLites?
All day, every day. 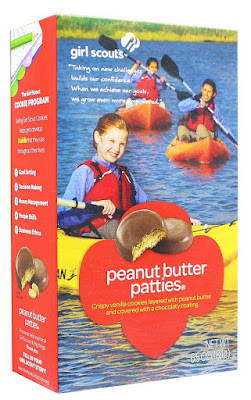 Stan Musial, Hank Aaron, Babe Ruth, and Peanut Butter Patties.
All-time greats.
We all know that there are some lesser Girl Scout cookie flavors. For starters, the Shortbread and Peanut Butter Sandwich cookies are dry, bland, and utterly unfit of their brand name. Why am I going to pay $5 for a peanut butter cookie that has the texture of a Triscuit cracker when I can spend the same amount of money to buy Nutter Butters, which taste better and are shaped like a peanut. 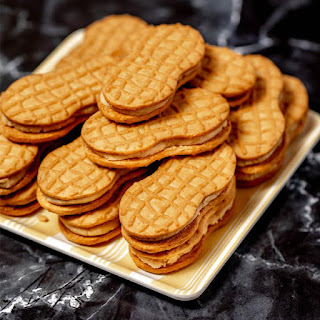 Nobody is going to mistake Nutter Butters for Bob Gibson or Sandy Koufax, but they are solid long-term player in the cookie world. Adam Wainwright, David Price, Don Newcombe, Nutter Butters.
Bowman baseball cards are very much like Girl Scout Cookies.
They came out recently and my social media feeds are now loaded with collectors pushing cards of 18 year-olds few have seen in person, but they swear on their best-friend's, brother's, college roommate's, nephew's, mother-in-law's grave that they found a card of a guy who is going to be a Hall of Famer within the next two decades.
"Buy this card of the Angels A-Ball catcher! He's 18, but I know he's going to be a star! Just $200 shipped!"
It's essentially the same sales pitch as the really mediocre Girl Scout Cookie flavors.
As sure as there are Peanut Butter Patties, I am sure that some current Minor League baseball player will eventually go on to be a Hall of Famer. I am also certain, as a person who ate one of those Lemon Girl Scout Cookies last year because my daughter (not a girl scout) wanted to try them, that many current Minor Leaguers will amount to little as a professional baseball player.
I recently ran into a box of Bowman baseball cards. The $30 blaster boxes at Wal-Mart, not the $400 jumbo boxes at baseball card shops. Nobody needs to read a "What I Learned Sleeping In The Wooded Lot Behind My House" post on this blog.
I thought it would be fun to look at some of the cards I pulled. I am not making any predictions outside of saying that I typically put together a Bowman set every year.  Afterwards, I put it in a box. I put the box in a closet. I ignore the box for five or six years.
Let me start by saying, as a person who watches and follows Minor League baseball, I am slightly disappointed that Curtis Mead is not flying under the radar this year. After quietly following him from a far last year, I think he's for sure a Peanut Butter Patty, Caramel deLite, or Thin Mint. Curtis has more pop than Wander, naturally more strikeouts, but he hits for a high average and is on-base all the time. I hate how much his cards cost and I don't want to be your friend if you have bought one of these cards off of Ebay for more than $300.
Go away. 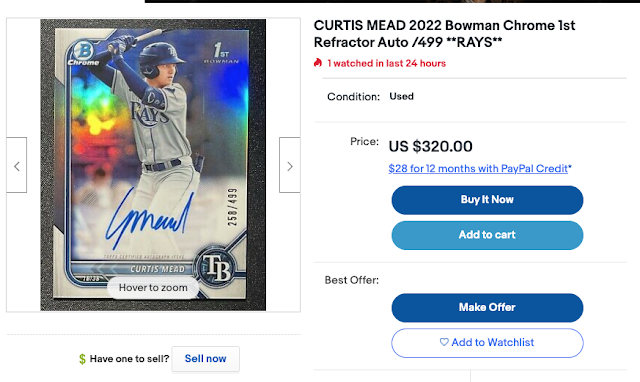 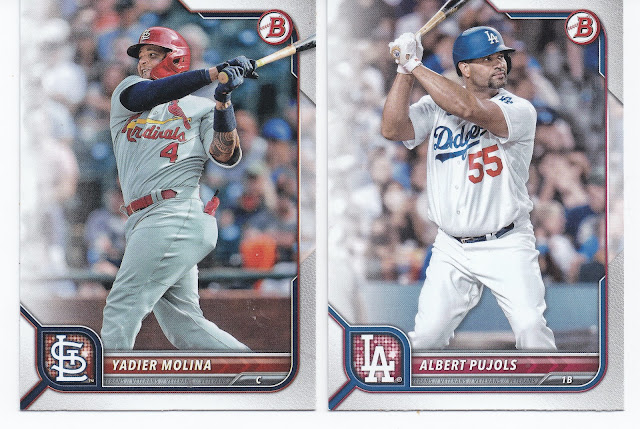 Bowman is geared for young players, but I am still going to mention some old guys.
Albert and Yadi are definitely Peanut Butter Patty kind of players. 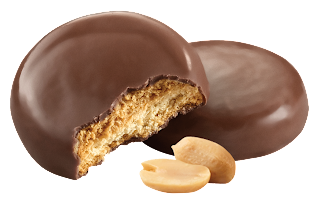 I love that Bowman has a set of 100 veteran players taking up space in their packs. Who buys Bowman cards for the veterans? Even if they are high-end Girl Scout Cookie worthy, they are just pack filler.
Next up, not a peanut butter patty player. If you are reading this blog and it's after 2037, feel free to make fun of me or giving me a high-five for calling any of these prospect cards correctly. 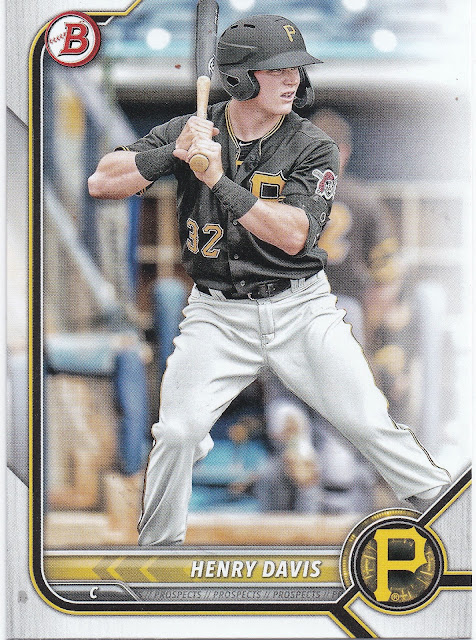 Last year's first overall draft selection, Henry Davis. He's been very good playing down the road in Greensboro. It's not the Majors, but it is one of the best low-Minor League parks around. Henry is going to be a solid Major League player. I am going to guess he's a Caramel DeLight. 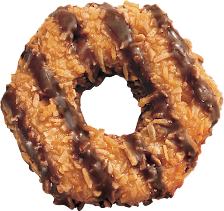 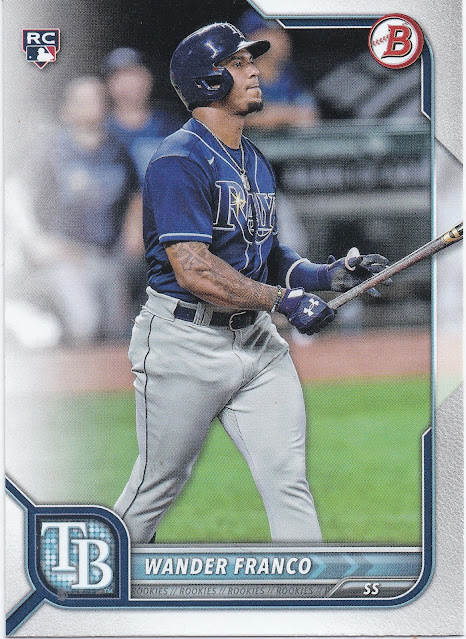 A lot of people think Wander is a Peanut Butter Patty kind of player.  I hope they're right. Personally, I agree with the take, but I will add that I think he's a Thin Mint or Caramel deLight at worst.
Wander is a high basement, high ceiling player.
Here is the back of the card. 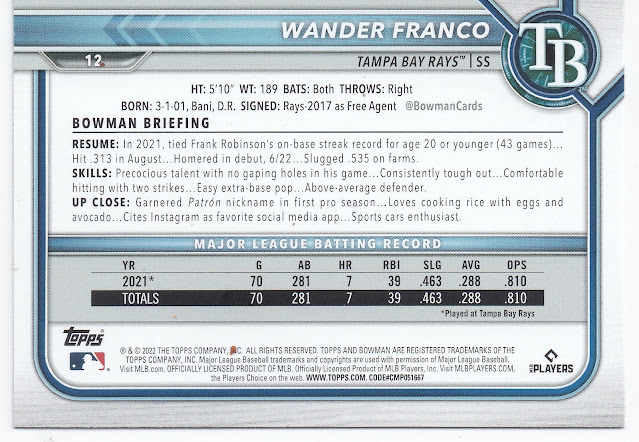 There is no mention of the Durham Bulls, but Wander does love Instagram.
Although, Wander does not drive a sports car. He has a Mercedes SUV. It's in every picture on his account that features a car. He parked it in the wrong parking spot last year and the Rays players moved it onto one of the practice fields at Spring Training. 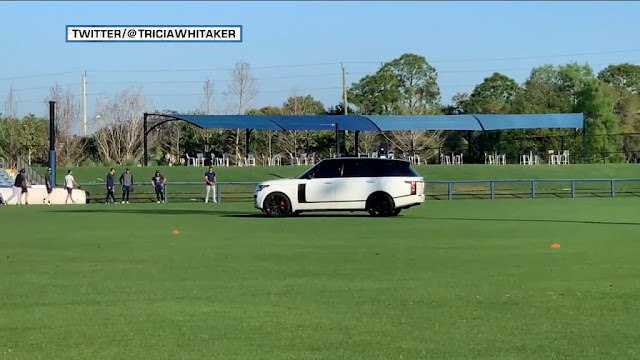 Hazing people at work is such a Shortbread cookie sort of move. 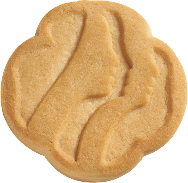 Next up, Juan Yepez. 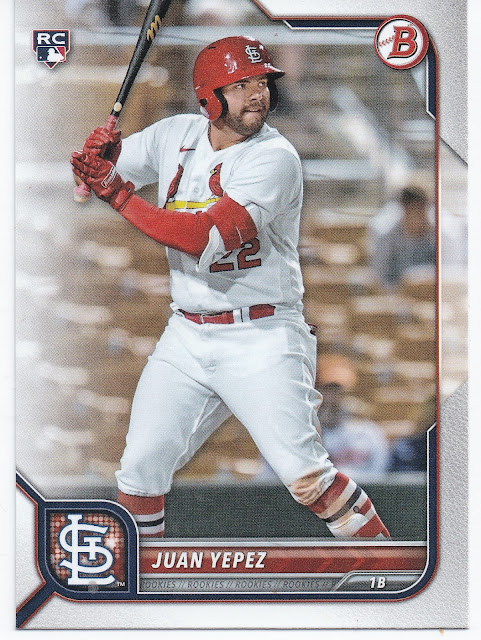 I am excited to see Juan get a new baseball card. It's been a few years since he got a Braves prospect card, so a Cardinals rookie card is a welcome site. For the love of the Cardinals offense, I hope he's at least a Thin Mint. The team's offense is on a bigger struggle bus than a table full of Boy Scout Popcorn.
Gross. 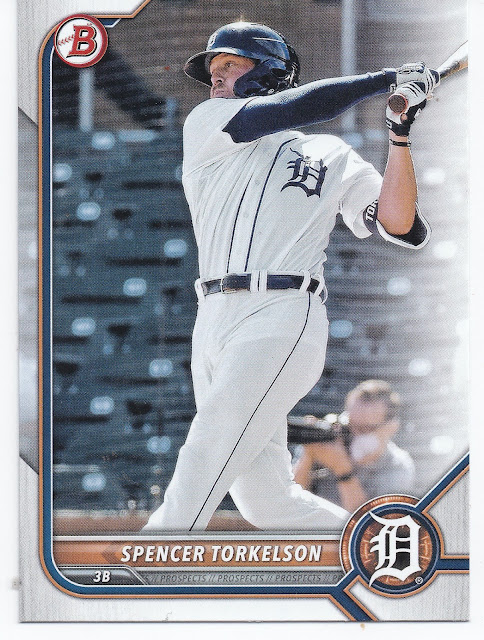 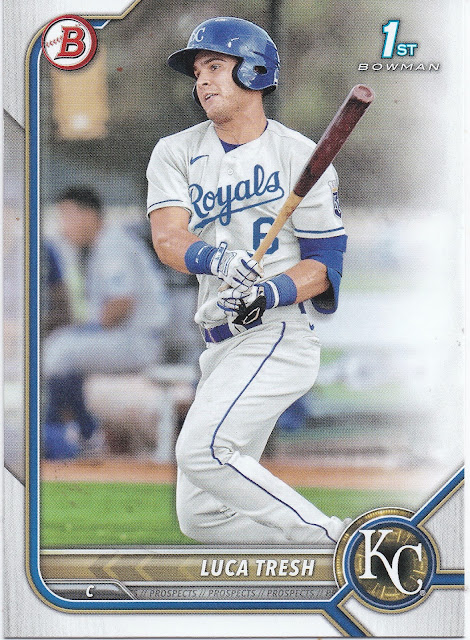 Former NC State catcher, Luca Tresh. He's off to a surprising start in the Minors. I would love to say that Luca Tresh would be some prime grade Girl Scout Cookie, but I am not sure. Seems like the type of player who might be destined for a role as a utility player. Maybe one of those Keebler knock-offs.  I will go with Coconut Dreams. 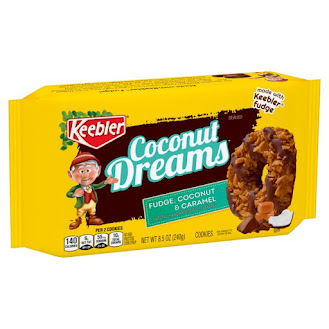 Next up, Vidal Brujan. 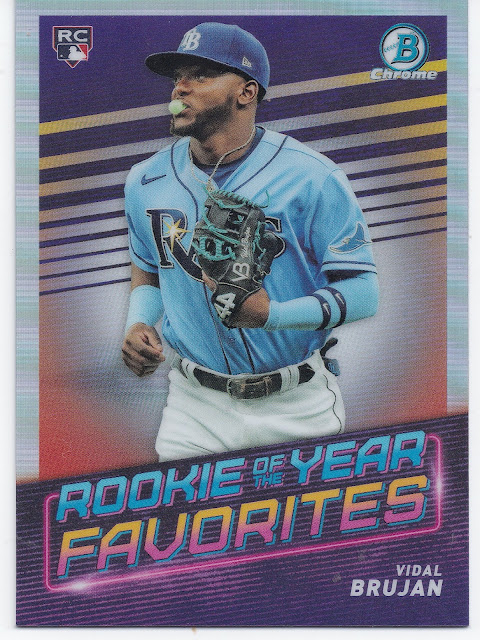 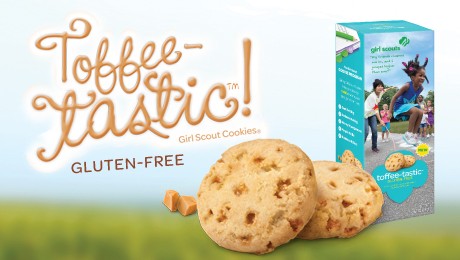