I am approaching ten years now in this space. During that time, I have made several vague references to a "mall card shop" near my house that I never really visited. I am not going to name names for this post.  Maybe in a future post. Mall card shops are not really ideal, I do not want to spend a lot of time rehashing all the various reasons.

The mall with the card shop was in the process of closing prior to the pandemic.  The anchor stores were closed and the mall was filled with all sorts of odd shops.  One of the local high schools had even landed a space in the mall for their robotics teams.  I am not sure exactly when the mall officially closed, but the most recent pictures I can find show it completely shuttered. 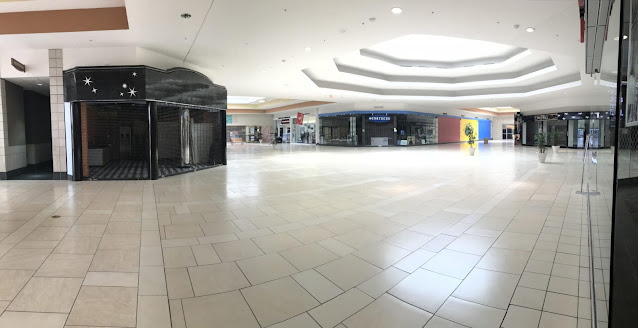 I had actually been to the mall card shop several times while the remaining stores were in the process of holding clearance and closeout sales, but it was primarily for a few large card boxes. I discovered a sweet table of old wax boxes on the last trip. I ended up buying a box of 1995 Emotion cards, which was a fun product back in the day.

At some point in the last year, the mall card shop reappeared within a five minute drive of my house in a new development.  I was curious about the store, but did not make a visit. I figured it was likely going to be similar to its identity as a mall card shop and it's in a little bit of an odd place. The only thing I knew that was on that same street was a trailer park.

Well, I needed some card boxes a few weeks back, so I loaded the little man in the car and made a visit to the card store.  Not my picture, but it looks nice from the exterior.  Yes, the trailer park is still there, just to the left in this picture. 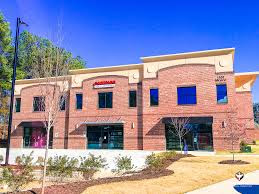 I dare say, I was impressed with the store. They had a decent selection of single baseball cards and a lot of wax. The little man spent a good thirty minutes looking through the boxes trying to find some Nolan Arenado and Paul Goldschmidt cards. He ended up with a nice stack of cards. I also ended up buying a few inexpensive Jake Cronenworth cards, but I was just more impressed that the store had card supplies.

Enter this week. We have been in the process of replacing the floors in our house. Our furniture has been moved around. On Wednesday, the little man could not hang out in his room, because our contractor was working on our staircase. 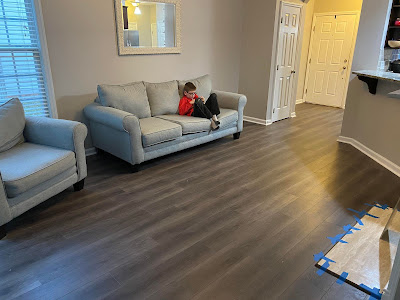 We made another trip to the former mall card shop. Again, I was impressed by the store. The little man was able to track down a few single cards from the Cardinals, Tigers, and Rays players he collects. Those are his three favorite teams. I also ended up with a bunch of single cards that I am posting now, but also ended up picking up some Topps Heritage Minors. That's for a different post.

Here was my haul. All of these cards averaged out to roughly a dollar per card minus the last card. 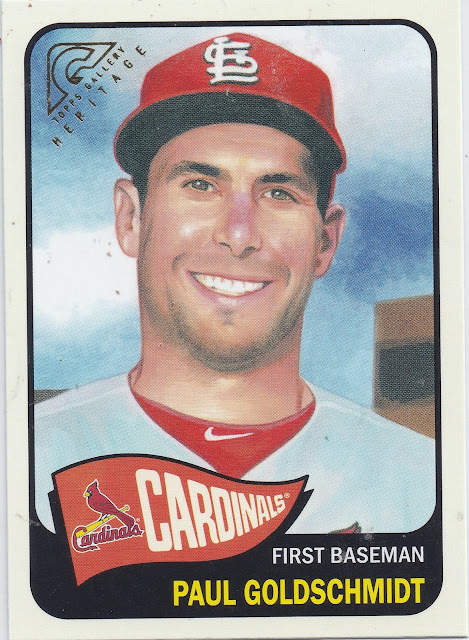 I have not really done much with collecting Paul Goldschmidt cards since the Cardinals traded for him in 2019. He was a nice player on the Diamondbacks, but I was not a huge fan. I feel like I have come around a bit after this past year.  Good player, borderline Hall of Famer.  I will try harder on Goldschmidt in the coming year. 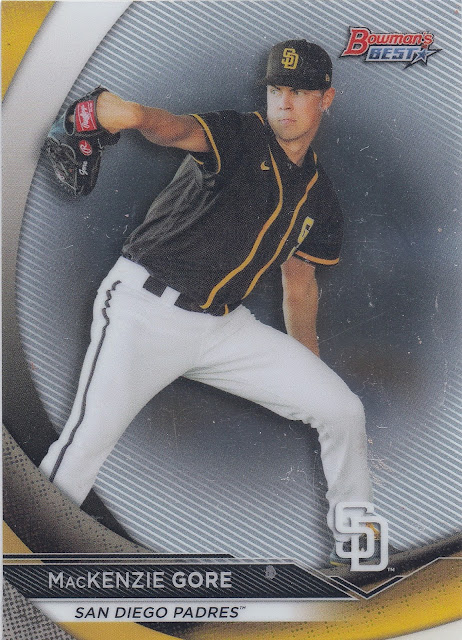 Next up is a MacKenzie Gore. He's from North Carolina and I have a connection to him through work. Not the best year in 2021, but I still think he has a bright future. 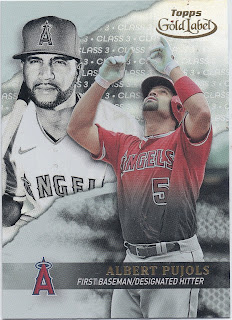 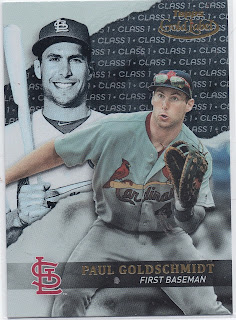 The late 90s Gold Label sets were much better, but still not bad cards.  Picked up a Pujols and Goldschmidt. Not sure if the Class 1, Class 2, and Class 3 cards are the same as the original sets.  Pujols is a Class 3 card, which is why I asked. I believe those were short-printed back in the day.

Next three are all of the newest Cardinal, Steven Matz. Just a bunch of Topps Chrome singles, nothing too fancy. 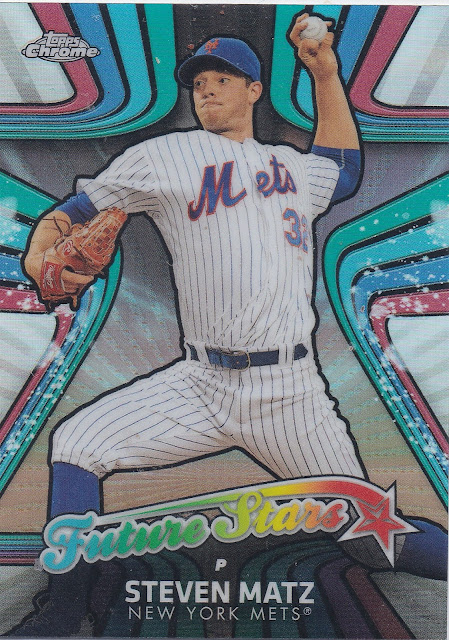 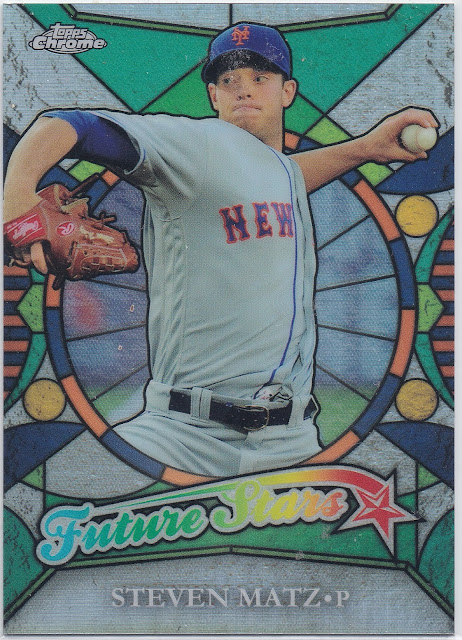 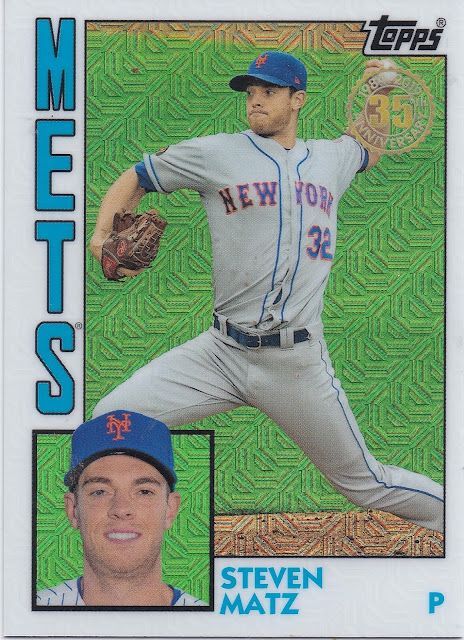 The bottom 1984 style card from the 2019 Topps set is my favorite Matz card out of this group.  I need to go through my Mets and Blue Jays singles from the last few years and see what other Matz cards I have hanging around.
The next three are cards are all NC State players.  First up is Russell Wilson and Trea Turner. 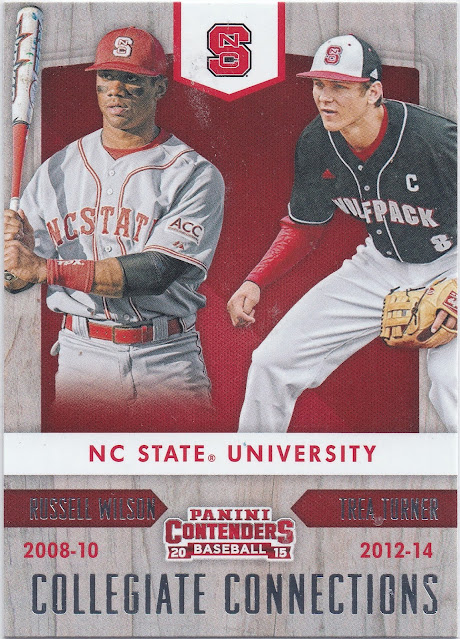 Nice to see Russell Wilson shown as a position player with a bat in his hands. There are several Panini cards floating around where he is shown as a pitcher.  Russ was actually a second baseman. Heard he also played for the football team.
Two T.J. Warren cards..... 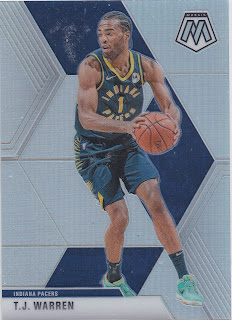 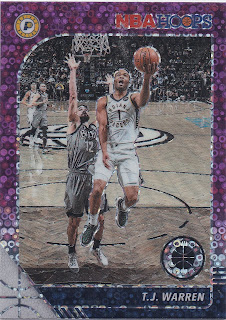 I am a team behind on T.J.. The last time I posted one of his cards he was still on the Phoenix Suns. That was two years ago. He's played well on the Pacers so far, although T.J. has still had problems staying on the court due to injuries. Last year, T.J only played four games. This season, he has already missed a game or two with a foot injury. Still my favorite former NC State basketball player. 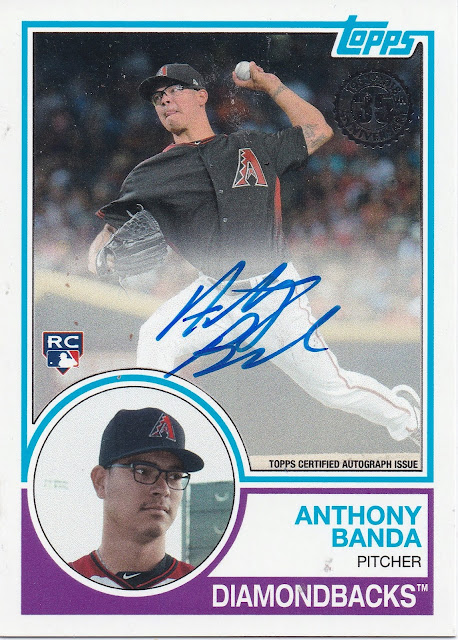 He was really good for the Bulls a few years back, but has had a few arm injuries and bounced around to the Giants, Mets, and Pirates.  The Pirates used him as a reliever during the second half of 2021 and he seemed to find his stuff again.

I picked up two boxes of Topps Heritage Minors while I was there. Not very mall-like prices on the boxes, plus I love Minor League baseball cards. That post is for another day.

Posted by The Snorting Bull at 2:31 PM