The EX sets were some of my favorite products in the late 1990s.  Good designs.  Innovative product.  There wasn't much not to love about the first two designs that Skybox used for this product.

The 1998 set is my favorite of the two.  I will have to do a write up on this set one week down the road. 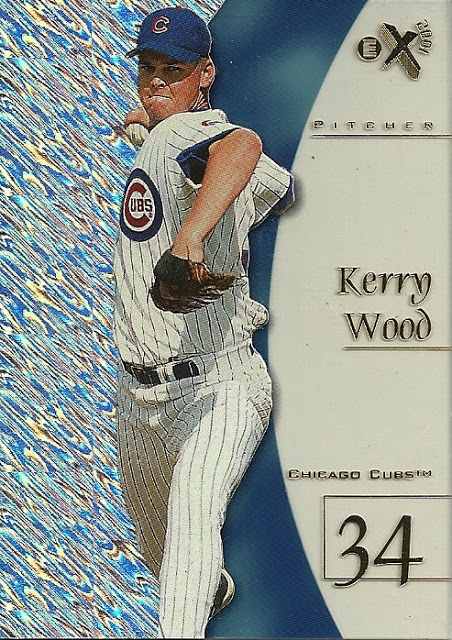 The 1999 EX set is also very good, but a notch down from the original in my opinion. 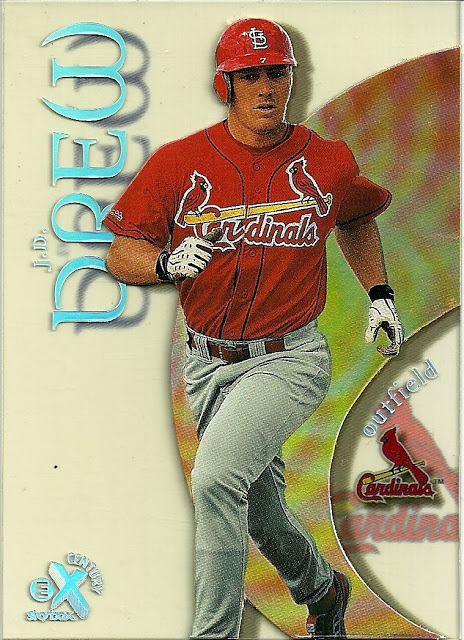 Same basic formula and format for both the 1998 and 1999 sets.  Transparent plastic cards with a raised photo of the player.  Unfortunately, someone at Skybox went and did something really dumb the year after.  They changed the product in 2000.

The card stock was thin and the front of the cards were actually stickers that placed on the cardboard.  Over time the adhesive lost its stick, and you had these catastrophes.  Note the peeling at the bottom of the card. 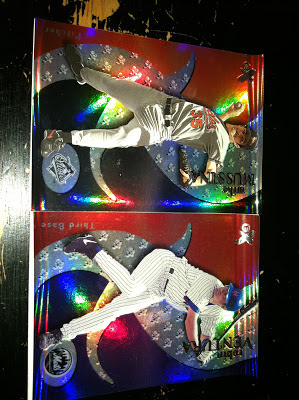 I had some really low expectations for the 2001 E-X set when it came out.  In fact, when it was first released I did not touch it until I saw someone else open a pack.  The cards were re-branded to Fleer and the were much better quality.  Thick card stock (The 100 card base set fits nicely into a 300 count box) and the printing was directly on the card were good repairs from the 2000 set.

The base has some of the same design elements as the 1998 and 1999 sets, minus the transparent plastic section on the side.  While the design shifted back towards the first two sets, the player picture is not raised on the card like the originals. 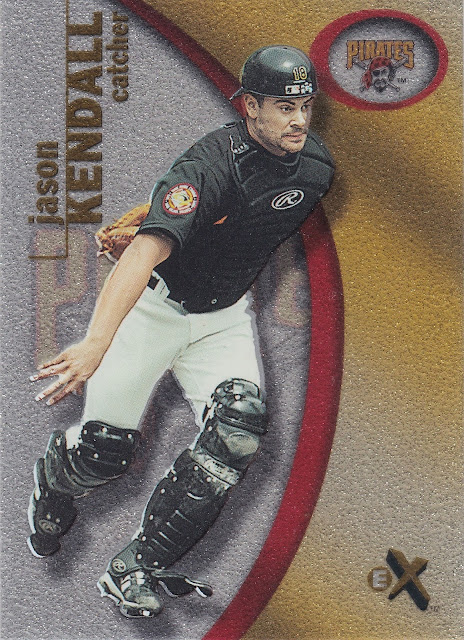 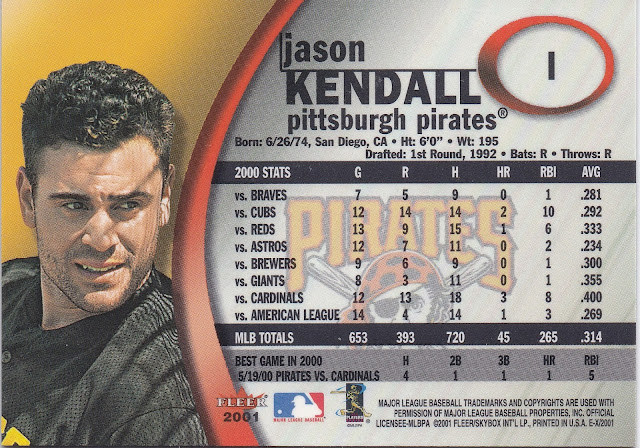 The stats are a little weird.  The players performance against their division is included on the back, along with the playoff teams from their League and Interleague play. The bottom features some really generic stat line of their best game of the 2000 season.

I think that they could have made the backs a little more streamlined and simple.  It would have worked just fine in this set.

The answer is Chipper Jones. 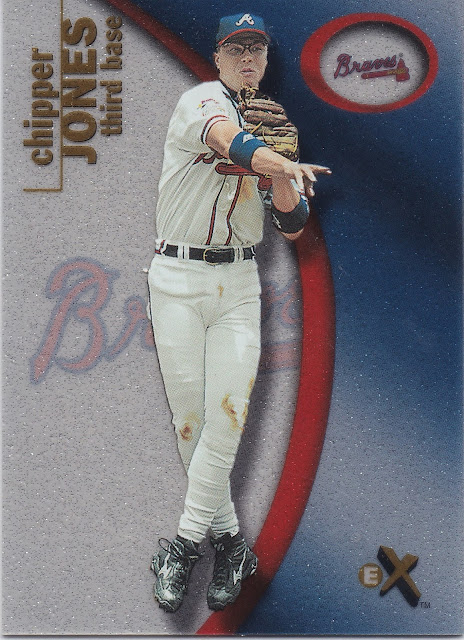 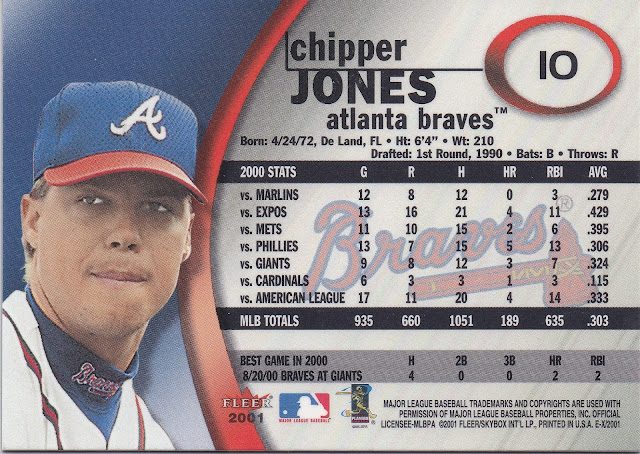 The Cardinals did a pretty good job of keeping Chipper in check during the 2000 season.  Although, the 1 home run he hit against the Cardinals was a game winner off of Mike Timlin.

I might have to select my best Durham Bulls card on the picture after this post, which means that 50% of these posts will still have a Chipper Jones card.

One of the best parts of writing these set posts is that it gives me a chance to dig through my card closet and find some cool cards that I have not shared yet.  It forces me to look in boxes where I normally do not venture.

Two months ago, I spent an hour digging through my 2001 sets pulling out Albert Pujols rookies for this post.  I thought I had them all, but I missed this one.  Find this missing one also led me to look in another box, where I found another.  That's two new Albert Pujols rookie cards from writing this post. 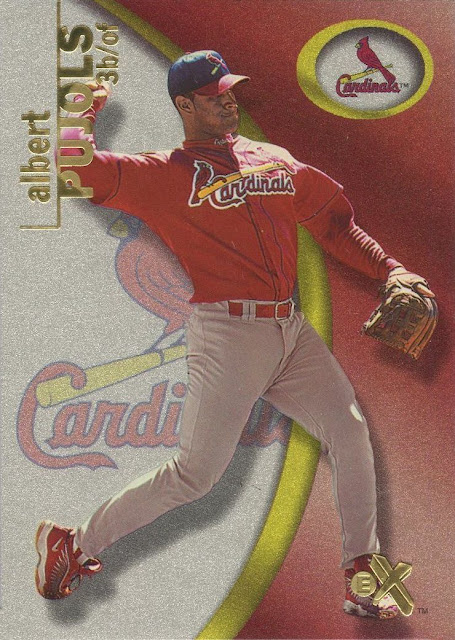 This was really a no-brainer once I saw it in the box.  However, there is also another Cardinals rookie card in this set that is a little bit of an early 2000s cult classic.  I am going to split the best Cardinals card between Albert Pujols, and the guy below. 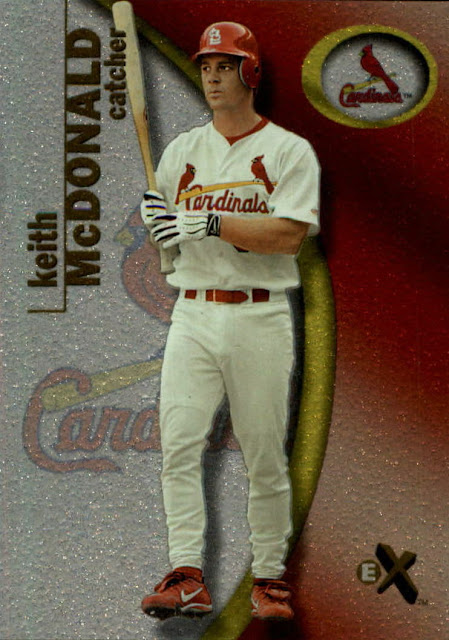 The Cardinals called him up in early July 2000 to backup catcher Mike Matheny while Eli Marrero was on the disabled list for a short stint.  His first at bat came towards the end of a July 4th blowout against the Reds.  He hit a home run.
Plenty of players hit home runs in their first at-bat.  Not anything too extraordinary, right?  McDonald also managed to hit a home run the next night in his first at-bat to become the second Major League player to hit a home run in his first two at-bats.  The other was outfielder Bob Nieman, who actually played a few seasons with the Cardinals in the early 1960s.
To make the story even more bizarre, McDonald ends up getting a few pinch hitting opportunities over the next week, but he doesn't get any hits.  Last weekend he was in the Majors in 2000, he gets to pinch hit late in a game and hits a home run.  Three hits while he was up, all home runs.  The Cardinals send McDonald back down to the Minors, but call him up in 2001 for a few games.  Bounces around in the Minors a few more years, never gets called up.  Never gets another hit in the Majors.
Keith McDonald is the only Major League player to have one than one home run, but no other types of hits.  He has an autographed card in this set too, but I do not own it.  Yet.
Favorite Non-Cardinals Cards
These were fairly easy choices this week.
First up is Vladimir Guerrero. 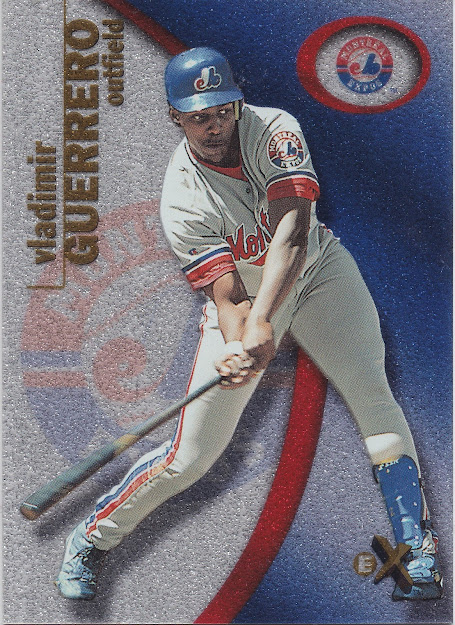 If you ever watched Vladimir Guerrero in person, you know that pitchers really had to work hard to walk him.  He was not going up there to take a bunch of pitches.  The crazy thing was that he hit balls most players would take, and hit them hard.
The ball actually looks like it's at his knee in this picture, but his swing looks really odd here.  Bet this ended up being a hit. A few years back, someone made a mash-up video of 50 Cent's first pitch for the Mets and Vladimir Guerrero hitting a double.  The 50 Cent first pitch missed home plate by 10 feet, it's always on those terrible first pitch blooper videos.
I also have another favorite rookie card in this set, but I own the autographed copy of this one..... 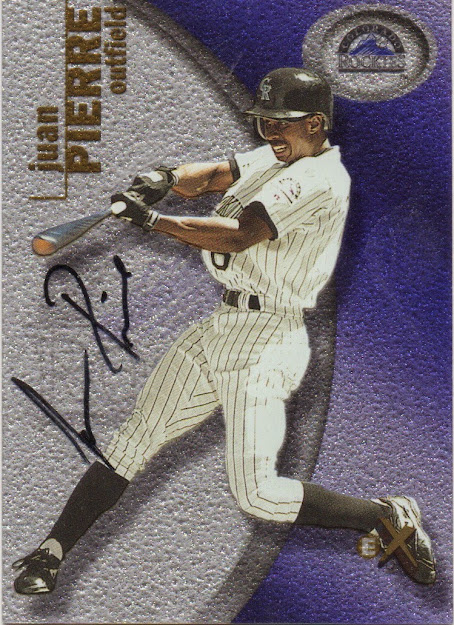 Juan Pierre was always a fun player to watch.  One of the last players, might be the last, to wear his fielding hat underneath his batting helmet.  Always one of my favorites.  In some ways, Juan Pierre was a 2000s player who probably would have fit in well with the 1980s Cardinals.
How Does It Rank?
The 2001 Fleer EX is much better than Ionix, but not nearly as good as the Super Teams set.  I spent a few minutes thinking about this in comparison to the 1986 Topps Mini League Leaders.  I like the Mini League Leader set, but this has some nicer bells and whistles.  Also Keith McDonald.  I am going to place this set second on my list.
4. 2000 U.D. Ionix
3. 1986 Topps Mini League Leaders
2. 2001 Fleer EX
1. 2002 Topps Super Teams
That's a lot of early 2000s sets.  I am going to do something from the 70s next week.
Posted by The Snorting Bull at 10:18 AM