This is the second single card that my wife bought me at the card shop in St. Louis.  It was my Christmas present in 2006, along with the Yadier Molina autograph.  It's a Topps Chrome Record Breakers relic card.  The relic actually looks old, not just something from an old timers game, but who knows at this point. 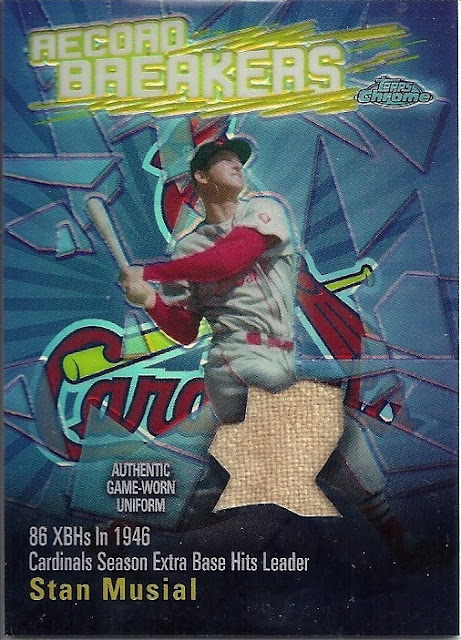 I really like this set.  I do not own the set, but I own a lot of the cards.  This is a good mix of a modern design with an older player.

Can we talk about the record listed on the front of the card for a minute?

I like math.  I teach math.  When I saw the number 86 extra base hits in a season, I thought that there was something wrong with that number.  That's a large number, but I know Pujols had several seasons near 100 extra base hits, and they were short of Musial's best seasons.

So, entering the 1946 season the Cardinals Top 5 extra base hits leaders in a single season were:

Johnny Mize actually had 86 during the 1939 season, which he later topped during the 1940 season.  The "record" total on the Musial card was actually good for only 8th best on the Cardinals all-time single season extra base hit list in 1946.  I say that as if it's a bad thing, the players on this list are all great names.  Also, the 1946 season was also early in Stan Musial's career.  Two seasons later in 1948, Musial had 103 extra base hits in a season, which is the actual franchise record.

Stan hit 39 home runs, and managed to lead the National League in both doubles (46) and triples (18) during his record breaking season. All the time, pitchers only struck out Musial 34 times that season.

Perhaps Topps should hire someone to do some better research on their baseball cards.

Posted by The Snorting Bull at 9:38 PM