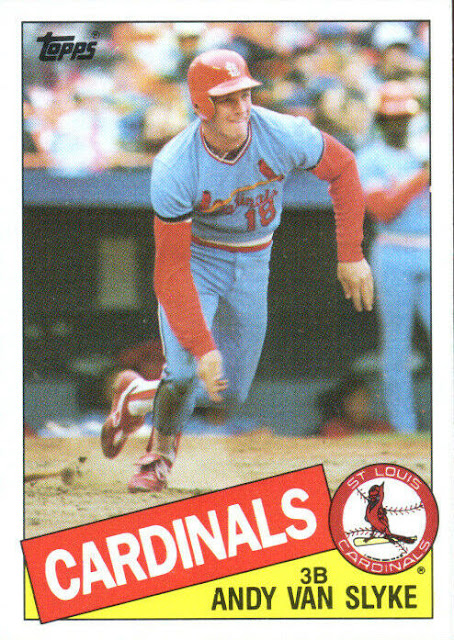 Before Whitey Herzog turned Jose Oquendo into a super utility player, he tried something similar with Andy Van Slyke during the 1984 season.  While he did not appear as a middle infielder, pitcher, or catcher, Van Slyke started games at every outfield spot along with the two corner infield position during both the 1983 and 1984 season.

A little odd considering Van Slyke was such a good defensive outfielder.

Maybe just trying to find Van Slyke some extra at bats.  Either way, Topps listed Van Slyke as a third baseman on his 1985 Topps card even though he started more games as an outfielder, and the Cardinals played Terry Pendleton as the regular third baseman during the second half of the 1984 season.

Beyond the curious position listing on the card, Van Slyke's 1985 Topps card is also one of my favorite powder blue uniformed cards from the 1980s.  His 1984 Topps card also has an action shot of Van Slyke in a powder blue, but he is looking up like a popped out to the first baseman.  This looks like it has some hopes of being a hit.

It's a nice photograph.  I like George Hendrick standing in the background too.  No socks showing. 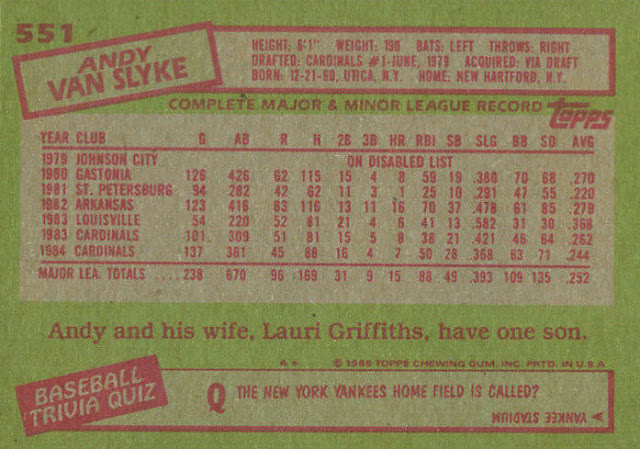 Back of the card.  The trivia question is a tough.

I like that Van Slyke was still young enough that you can see all of his Minor League stats on the back of the card.  Scott Van Slyke was born in 1986.  The son mentioned on this card is A.J. who played baseball at the University of Kansas, and was in the Cardinals Minor League system for awhile in the early 2000s.
Posted by The Snorting Bull at 8:35 PM