I have long dreamed about typing this post.
There has not been much time for writing lately, so I am glad I have a three day weekend to crank out a post or two.
I did not think it would take this long, but here we are with the final few cards that I needed to finish off my set of 1964 Topps Giants cards. Thank you to everyone who helped out along the way, whether you traded or sold me cards, or were just here to cheer me on. I could not do it without you.
There are only two Hall of Fame players in this post, so lets start the post with one of them. 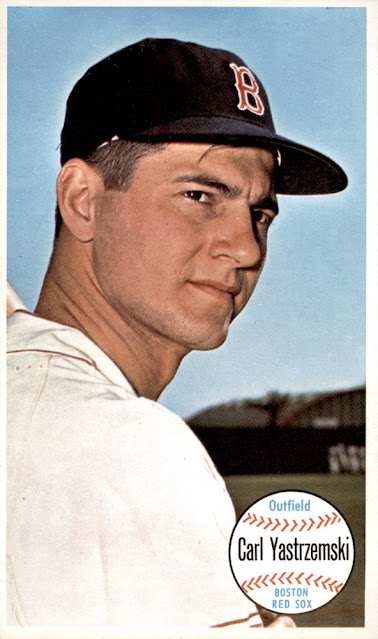 Yaz is not a short-print, nor a very expensive card. The centering is a little off side-to-side, but the condition of the card is good. I like the portrait photo with him looking over his shoulder.
Back of the card, which mentions the Raleigh Capitols. 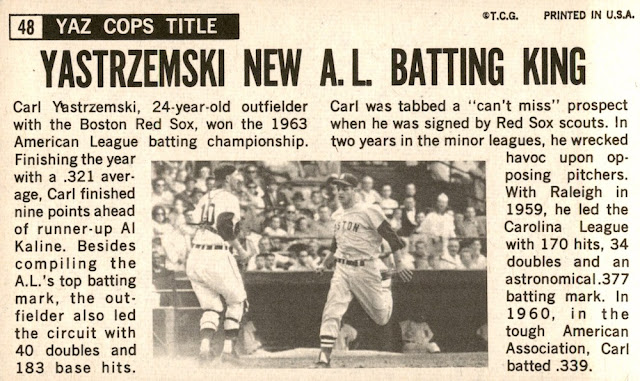 Yaz was actually really young here, so the Minor League write-up on the back does not feel quite as out of place. He played on the Raleigh Capitols before the team folded. Yaz had one of their more memorable seasons by an individual player. The Bulls were merged with the Raleigh baseball franchise at one point, but they do not claim their players, so the season by Yaz flies under the radar locally. It's a shame that there is not any recognition of the Minor League players from that franchise.
A common theme amongst the final players posted here, I learned a lot about players I knew little about. 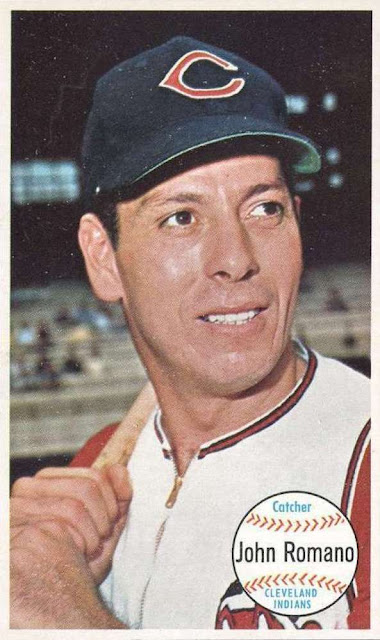 I only own one other John Romano card, which is a 1967 Topps card of him on the Cardinals. I am not going to post it here, but he has some combination of a 1950s flattop and slick-backed hair all rolled into one picture. He's wearing a sleeveless vest uniform, which I had long attributed to the Reds, but now know it's an Indians jersey.
Romano was actually a really good player for a time in the 1950s and 1960s. 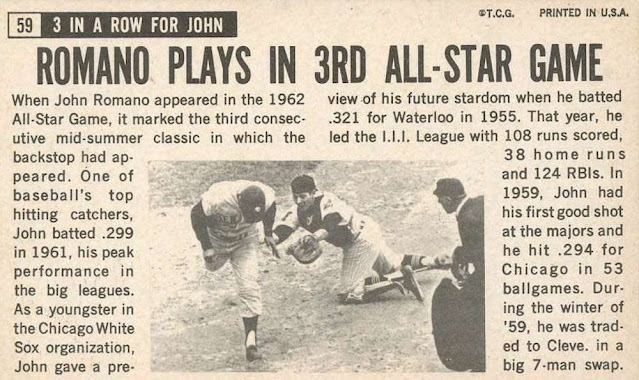 Romano was a good hitting catcher with pop who made a few All-Star games playing for the White Sox and Indians. He ended his career with the 1967 Cardinals as the backup catcher behind Tim McCarver.  He was not on the Postseason roster, but still spent the season with the team.
Next, Red Sox pitcher, Dick Radatz. 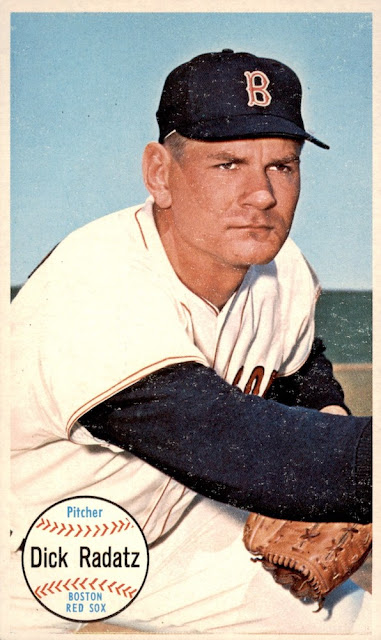 The front of the card is a little worn, but I am going to live with it. 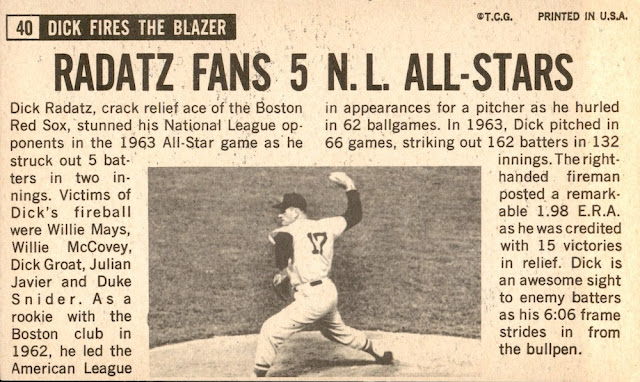 Radatz played in the wrong era. He was a gigantic person who threw really, really hard. He played in a time where relief pitchers were minimized. Radatz struck out a ton of batters and led the American League in saves twice. He seems like he would fit in really well with modern baseball better than the 1960s.
The second Hall of Famer in the post..... 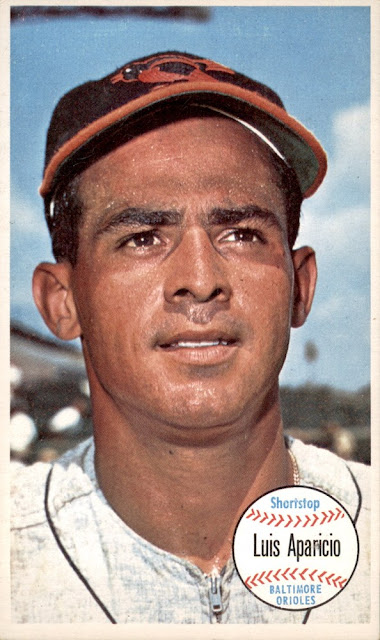 I know Aparicio spent the second half of his career with the Orioles and Red Sox, but he's a player I always associate solely with the White Sox. It's jarring to see him on a non-White Sox card. Sort of like those Dale Murphy cards where he is on the Phillies or Rockies. 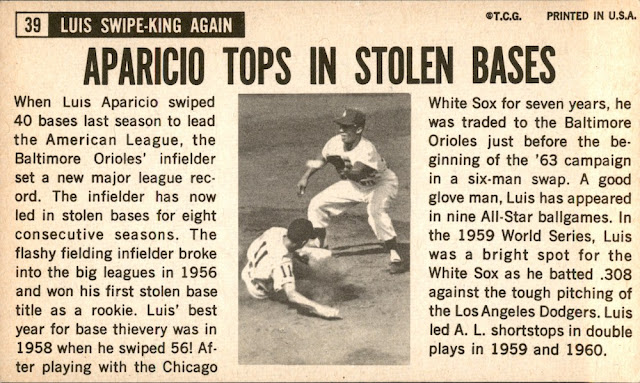 I really like the back of this card. The entirety is spent on his Major League career and does a good job of focusing on his strengths as a player, which were stealing bases and playing defense.  One of the better write-ups in the set. I even like the small black and white photo of Aparicio sliding into second base.
Next,Tigers pitcher, Dave Wickersham. 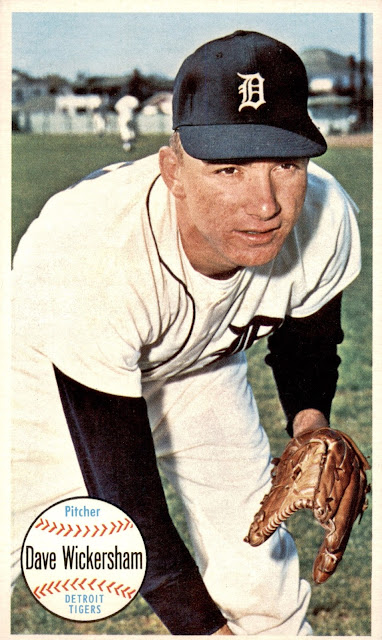 He actually passed away last week while I was drafting this post. Wickersham was 86.
Wickersham had an interesting career. 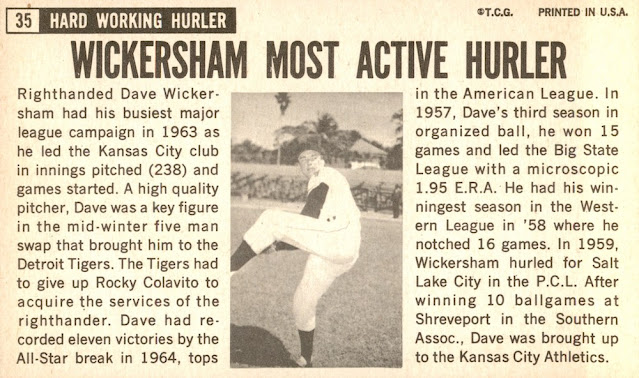 As stated on the back of the card, the Tigers thought enough of him that they traded Rocky Colovito to the A's to add him to their rotation. He was a middle of the road pitcher with the A's, but was great for the Tigers in 1964. Wickersham won 19 games that season and was ejected in the seventh inning of his final start with the game tied 1-1 in the 7th inning pitching for his 20th win.
The Vintage Detroit blog did a good write-up on the incident.
Wickersham did not do much after 1964, but did end up with the expansion Kansas City Royals for his final season, making him one of three players to appear for both the Royals and A's in Kansas City.  The window between the A's moving (1967) and the Royals starting (1969) was narrow enough its surprising that it was not a more common occurrence.
Next up, Albie Pearson. 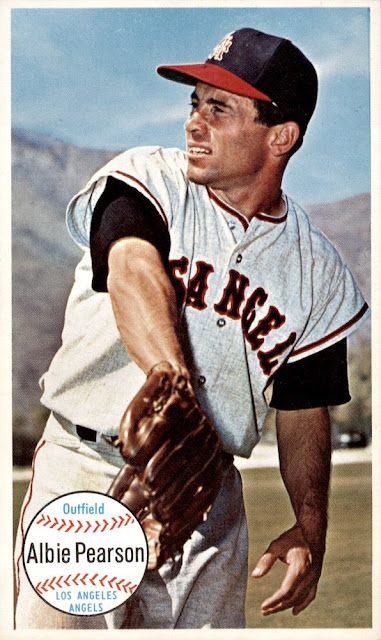 I was not overly familiar with Albie Pearson before tracking down this card, but I do like the picture on the front of this card. It's got to be a Spring Training photo with the mountains in the background. The Angels train in Arizona. 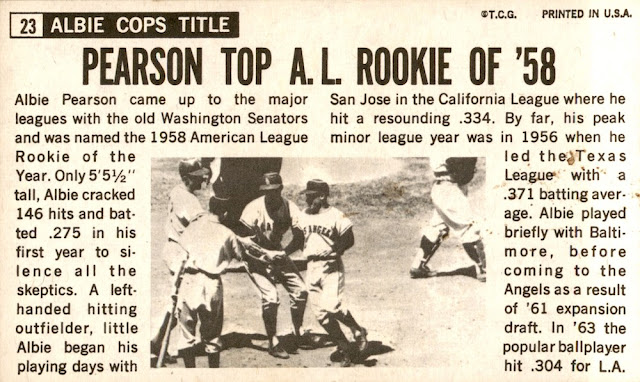 I like that they mention his height and weight. After looking him up, it seems that he was most notable for being a really small person playing professional baseball more than any single event or season. I tried to see if I could find an Albie Pearson and Frank Howard picture, or some other really huge player, floating around on the internet. Something similar to the Jose Altuve and Aaron Judge photos that pop up everywhere when the Astros and Yankees play.
I found nothing, so here is Aaron Judge and Jose Altuve. I am sure Frank Howard and Albie Pearson would have looked the same. 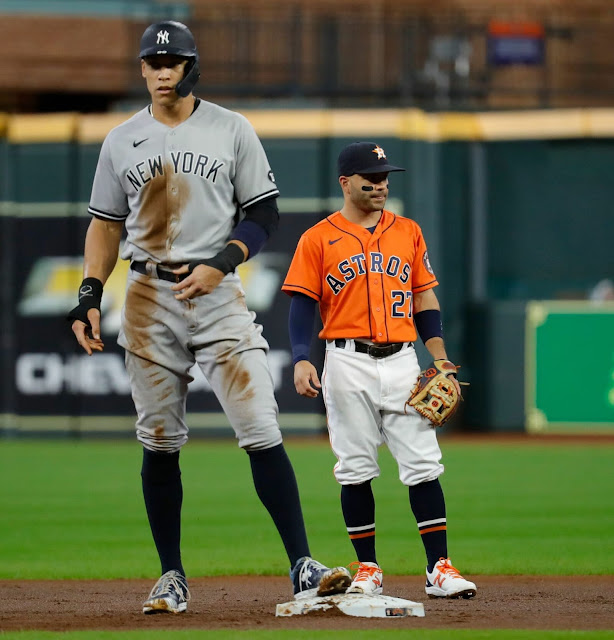 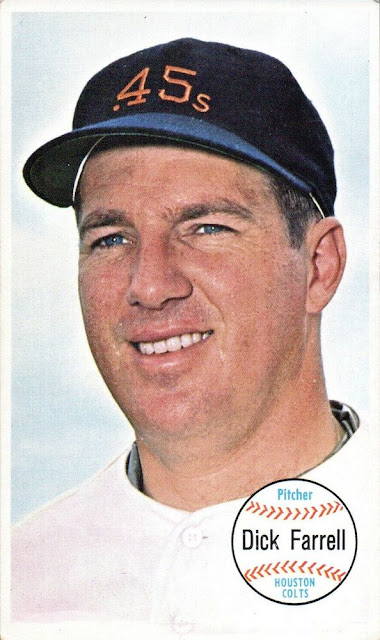 Farrell was a tall, hard-throwing relief pitcher for the Dodgers and Phillies for the majority of his career. However, the expansion Colt 45s selected him in the expansion draft and used him as a starting pitcher. He had some good years as a starter, but he later returned to the Phillies as a relief pitcher to end his career. Nice portrait photograph on the front of the card. 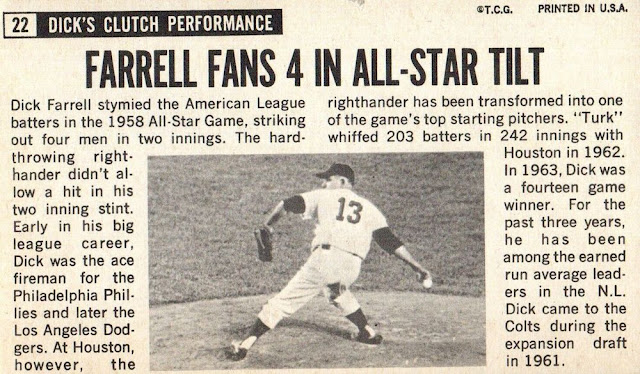 The centering on the back of the card isn't great, but I am going to live with it for the moment. The back describes his All-Star appearance in the 1958 game, which I thought was likely to be his career highlight.  It turns out that he actually ended up making the National League All-Star team 5 different times. Four of those were with the expansion Astros, so it could be that he was just the best player on those teams.
Farrell's son, Richard Dotson, played for the White Sox in the late 1970s and 1980s.
Another player I did not know much about..... 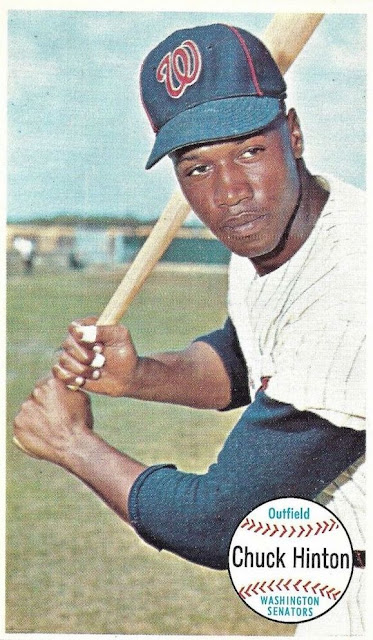 Chuck Hinton.
You should know this guy.
He is actually a local player who went to high school in Rocky Mount, which is about an hour east of Raleigh. Hinton went to Shaw University, a small HBCU in Raleigh before he got drafted into the Army for Vietnam. Hinton had a late start to his career, reaching the Majors at the age of 27, but he was a good player for a short time. At the peak of his career, Hinton was a 20 steal, 20 home run player.
Most importantly, Hinton founded the Major League Players Alumni Association after his career. There are people who, rather convincingly, argue that he is a person who should be in the Hall of Fame as a contributor to the game for starting up the Players Alumni Association. As the argument goes, he is likely tied to Curt Flood for admission into the Hall. 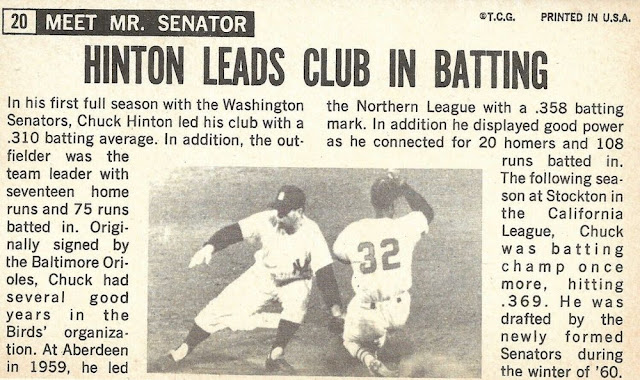 Here is the back of the card, which spends most of the time talking about his Minor League career.
Two cards left. Dick Ellsworth played during the 1960s, decent pitcher, but was always on the wrong teams. I kind of feel bad for him when I run into his cards. In 1963, Ellsworth went 22-10 for the Cubs. However, he also had a season where he went 9-20, another where he was 8-22. Not his fault. At one point in the late 1960s, Ellsworth ended up on the Red Sox. Otherwise, his career was spent with the Cubs (not good), the Indians (not good), and the Brewers during their first two years of existence (not good).
Ellsworth played thirteen years and his career record is 20 games under .500. He also has a career ERA of 3.72. If he had been on good teams, you can imagine his career would have been a lot different. People who argue that wins is a misleading statistic sometimes use Ellsworth's career as an example. Decent pitcher with horrible results, largely due to where he played. 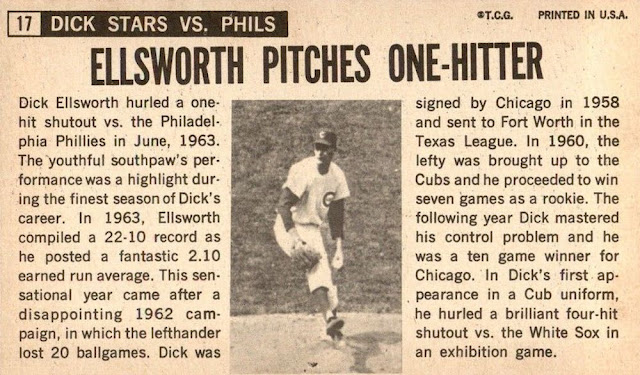 The back of his card focuses on a one-hitter Ellsworth pitched against the Phillies in 1963. Not mentioned is the fact that Wes Covington bunted to break up the no-hitter. Also in the box score, this gem. Top line. 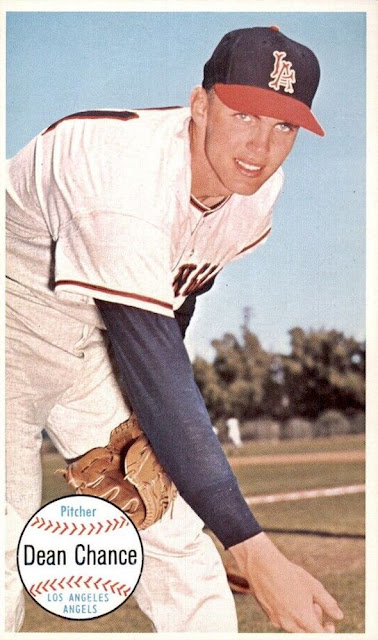 Dean Chance won the 1964 American League Cy Young Award with 20 wins and an ERA of 1.65. He had some good seasons with the Angels and Twins, but not a very long career. He was much more noted for his off the field activities than his on the field activities at different points during his career, along with Angels teammate Bo Belinsky. After spending his 20s hanging out at the Playboy mansion, Chance spent his retirement working as a carnival operator. The back of the card is the standard with a short write up about a single game and a whole bunch of stuff about Chance's Minor League career.
That's it, the entire 1964 Topps Giants set.
Posted by The Snorting Bull at 9:30 AM