It has been a great summer.

I really needed a break from work for a few weeks.  My in-laws live in a small town in Northern Michigan that is on Lake Huron, we took a vacation to see them for a week.  I love living in North Carolina, but there is something really nice about getting outside in the summer when the high temperatures are in the 70s and there is a giant lake nearby.

Here were some of my views. 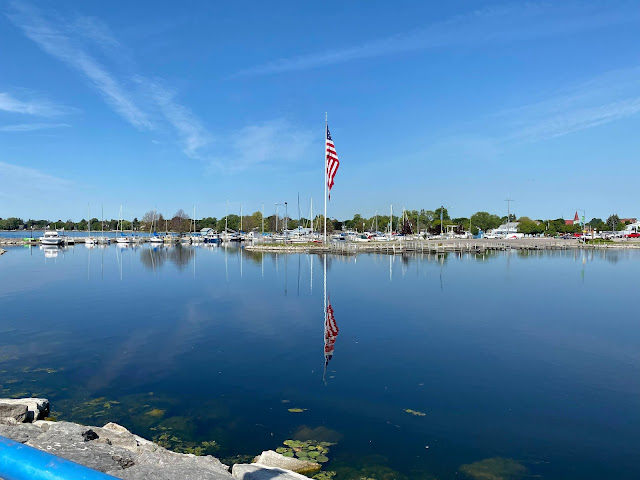 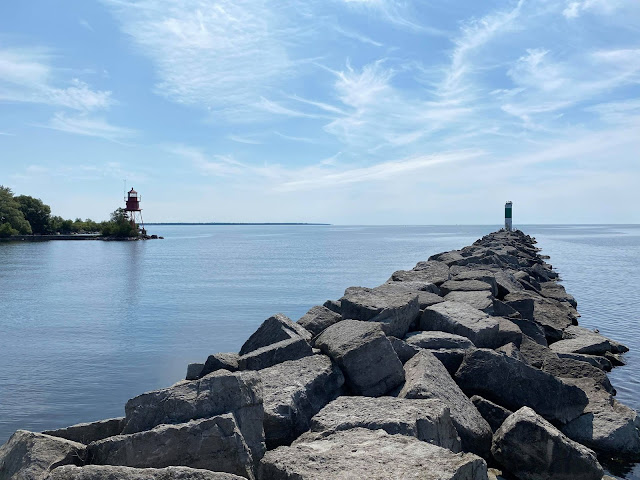 Besides staring at Lake Huron and enjoying the cool air, I also had a chance to take in a little baseball.

Before this past week, I had been able to attend a few Durham Bulls games, as well as a Carolina Mudcats game that ended up getting rained out.  My two awesome kids had gifted me tickets to a Tigers and Twins game for Father's Day a few weeks back.  I was happy to spend a weekend in Detroit and take in a Tigers game. 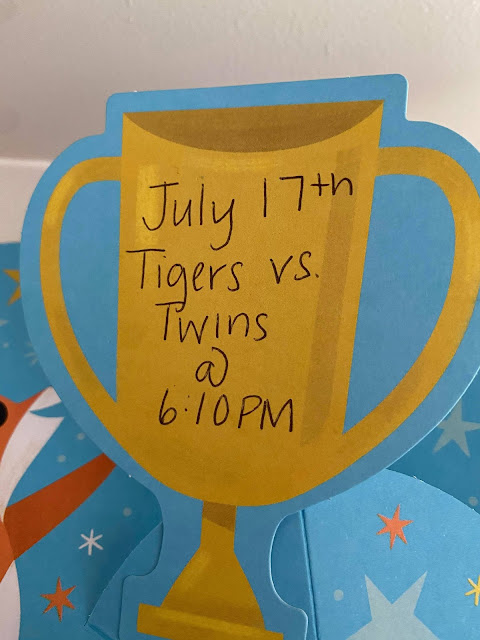 I go to Michigan all the time, but it has been a few years since I last attended a Tigers game.  We usually go for Christmas.  Nobody stops to see a Lions game.

Being the first weekend game after the All-Star Break, the Tigers had promoted the game as a second Opening Day.  They had a good list of former players signing autographs at Comerica Park before the game.  Plus there were players from the Red Wings, Lions, Pistons, and Detroit FC. 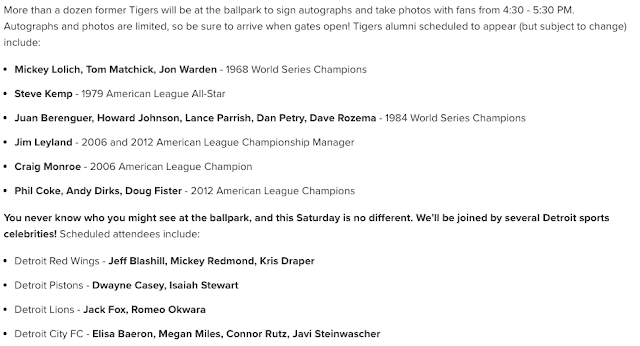 I went all-in on getting an autograph of Mickey Lolich.  He was on the Durham Bulls for a few years during the late 1950s and early 1960s.  Unfortunately, the autographs were limited and I am not sure if Mickey Lolich even ended up signing. 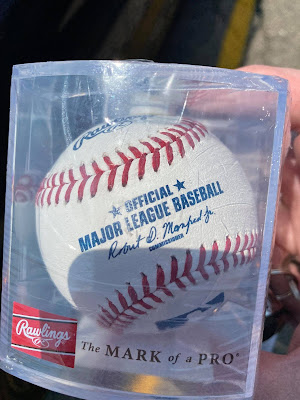 I will hold onto my baseball for another day.

In the meantime, there was a baseball game between the Tigers and Twins.  Plus, I got to spend time walking around Comerica Park, which is very nice.  If you are near Detroit and have some extra time, it's worth a visit.

It seemingly never makes those "Best Ballparks" lists.  Is there another stadium with better entrance gates?  I would have to say the answer is no, but I also have not been to all the other stadiums.  The giant Tigers and baseball bats are what immediately catch the eye, but the walls around the gates have blue and orange tile. 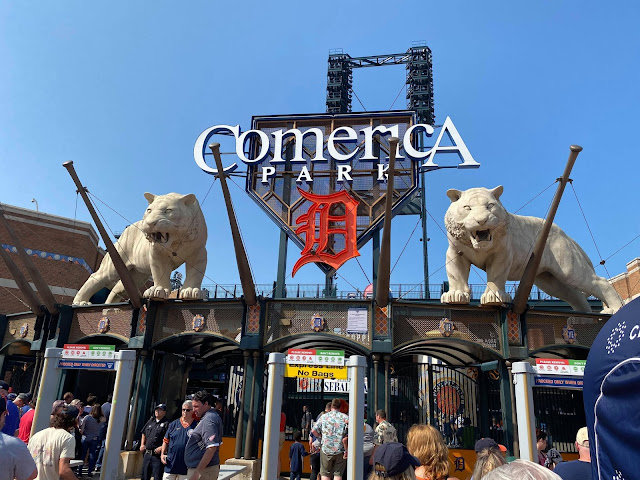 This is my panoramic shot from behind home plate. 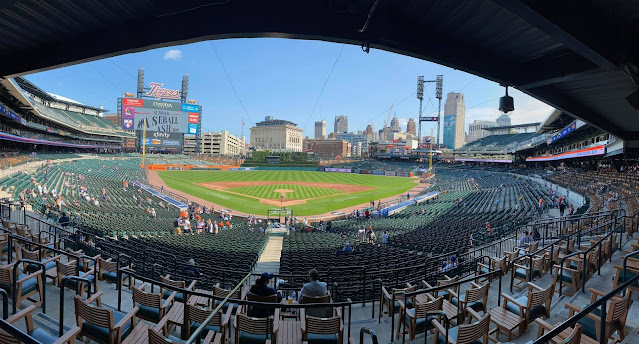 I like the view into downtown Detroit beyond the wall.

The concourses were fun to walk around.  The Tigers were an original American League team, founded in 1901, and have had their fair share of good players and teams.  They have done a nice job of highlighting the history of the franchise with these kiosk-looking displays that are broken down by decades. 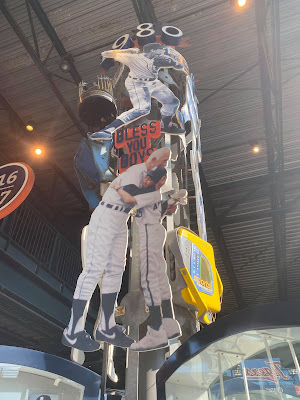 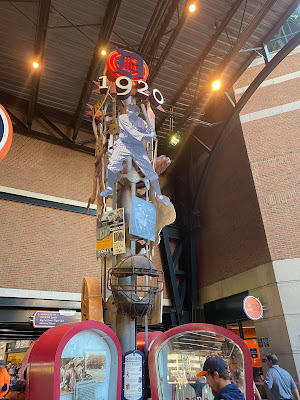 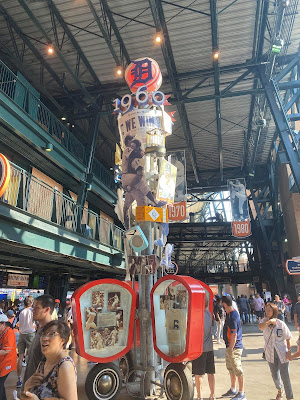 Small detail, but neat considering it's Detroit.  Each of the kiosks is mounted on a set of automobile tires that match the automotive-style of the time period.  The 1960s has whitewall tires with plain hub caps.  I was not alive in the 1960s, but I am going to trust the Tigers that those were stylish at the time.

I was trying to figure out the player on one of the 1990s banners. 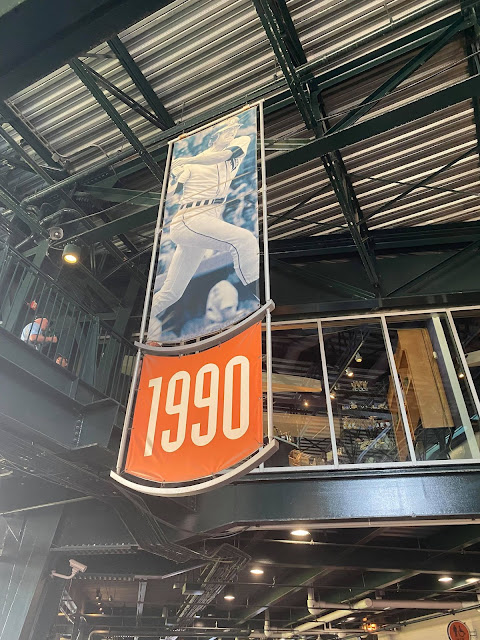 Pretty lean decade for the Tigers.  I would have gone with Cecil Fielder if I were choosing the player.  I was hoping this might be a slimmed-down Bob Hamelin, but I think it might actually be Dave Bergman.  He's more of a 1980s Tiger, but I know he is a popular player in those parts and played into the 1990s. 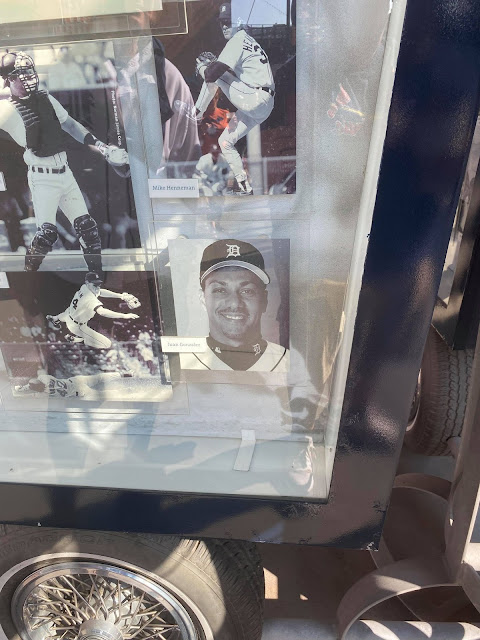 They had a photo of Juan Gonzalez is one of the displays. Shout out to the Tigers for not sugar-coating your team's history, even when the teams were not very good.  It's not the Tigers' fault they cashed in their Minor League system the same year that a certain player decided not to use steroids anymore.

Paws, the Tigers mascot, was also on the concourse before the game. 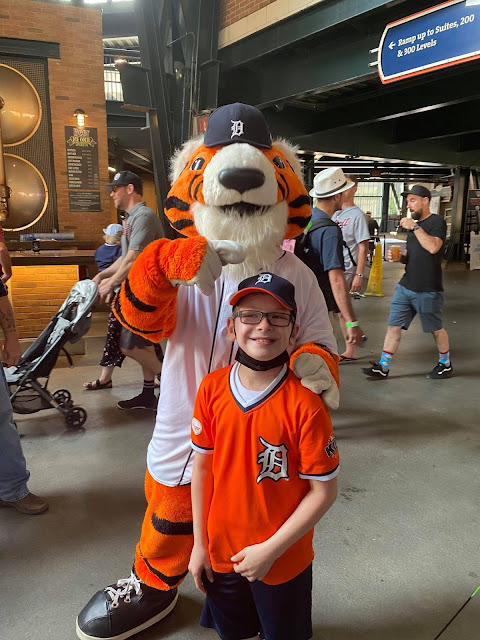 He took a picture with my son, in spite of the fact that I wore a Cardinals shirt to the game.  I am pretty sure he was making fun of my shirt after the picture.  It's hard to do when you can't talk.  Maybe he was just pointing me to the team store.

On to the game.

I was happy to see Miguel Cabrera again.  I saw him early in his career while he was with the Marlins, also during his prime with the Tigers.  Miggy may be old and his numbers are down, but he is still a fan favorite. 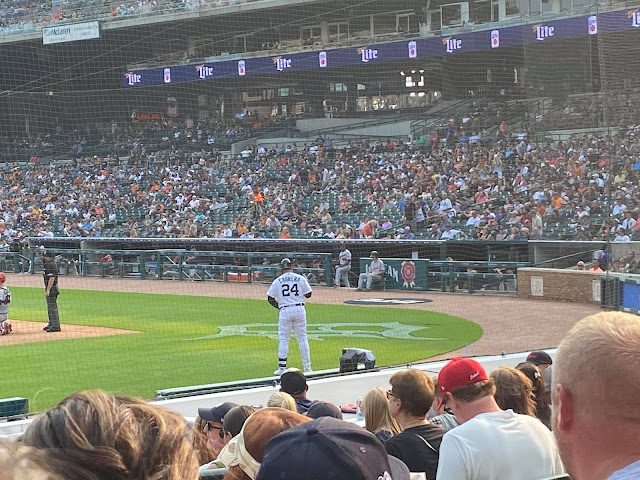 Cabrera hit a long, loud foul, along with a long loud fly out to the deepest part of the park.  More on Miggy's night later in the post.  Here is the long foul ball hit against Kenta Maeda in the first inning.

The Tigers have a lot of young players at the moment.  I really enjoyed watching Akil Badoo.  He is a fun player, reminds me of someone who could have been on the 1980s Cardinals team.  Gap hitter with a ton of speed, which should play well in Comerica Park.  The outfield dimensions are huge.

Here is a picture of Akil that I took in the third inning. 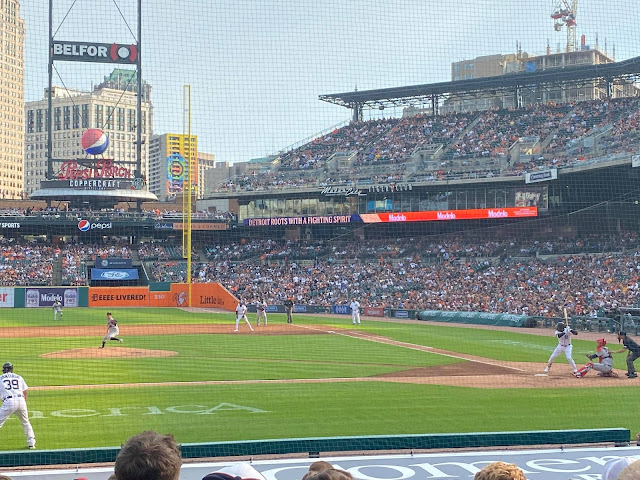 The at-bat ended well for him.  He hit a bases-clearing triple to give the Tigers the lead.

Definitely going to have to find a few Akil Badoo cards for the collection.

In the end, the Tigers ended up winning the game on a single from Miguel Cabrera in extra innings.

The Twins really did not defense that very well.

Anyway, vacation is ending soon and I am back to teaching.  Hopefully, I can squeeze in a few more Minor League games before the season ends in September.   Might have to squeeze the Durham Bulls games into one large post.

Posted by The Snorting Bull at 3:10 PM