I don't care what people say about Collector's Choice, I loved these cards back in the 1990s.  They were cheap retail cards that were often seen as a kid-friendly product.  I was in high school and college when Upper Deck was cranking out these sets.  I liked that the Collector's Choice sets were large and featured a lot of different players from the different teams.  There were quite a few 1990s Cardinals players who managed to make the checklist of Collector's Choice but never appeared in the Topps base set.

I picked out the 1998 Collector's Choice card for today's Random Ray post but will get around to the others in time.  Players who reached the All-Star Game were given cards with gray borders and a little logo in the top corner of the card.  Ray Lankford only made the All-Star Game once in his career in 1997, which meant that the 1998 Collector's Choice card got the special treatment. 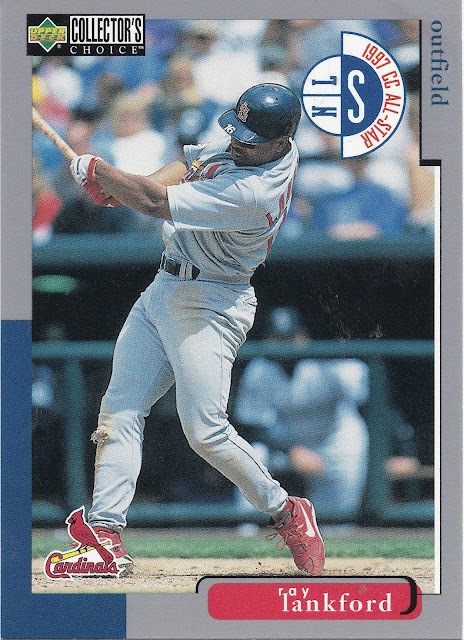 Nice action shot of Ray Lankford hitting in Coors Field.  This card was in Series 2 of the Collector's Choice, so it came out in June.  You can tell the photograph on the card was taken in 1998 because there is no number on the front of the jersey.  I love cards where you can trace the photograph back to a specific game.
The Cardinals played the Rockies during the second week of the 1998 season in Denver.  The first game of the series was a day game, also the Rockies home opener.  It was a controversial game that was decided on a key play that involved Ray Lankford.  Woody Paige, from ESPN and Denver Post fame..... 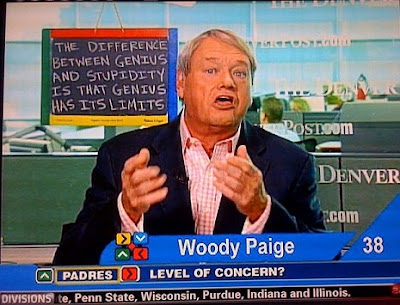 had a write-up of the play and also made an offer to take a drug test to prove his version of the play was correct.
From the April 9th, 1998 Denver Post.....

"St. Louis' Ray Lankford made an extraordinary catch at knee level. Helton tagged at third while Castilla blew past second base. Helton slowed on his path to home and hollered for Castilla to return. The ball, meanwhile, was relayed to first base to get Castilla, but not until after Helton had scored.

Even though the inning was over on the double play, the score should have been 12-10. The Rockies scored a run in the eighth and another in the ninth, and the Cards and the Rox still could have been playing this morning to break a 12-12 tie.

I saw the entire sequence perfectly with my own two surgically improved eyes from the press box.

Following Lankford's catch, I looked down and watched a rather lackadaisical Helton cross the plate, then instantly shifted attention to first just as the ball arrived.

There is absolutely no doubt Helton touched home for the run before St. Louis' Mark McGwire touched first for the inning's last out. I've never been so certain. I'll take a lie detector, or a drug, test."

Back of the card.
Well, this is an interesting photo of Ray Lankford bunting a baseball with his batting helmet on backward.  This photo was actually used on the front of another baseball Ray Lankford baseball card.  I will get to that in another post. 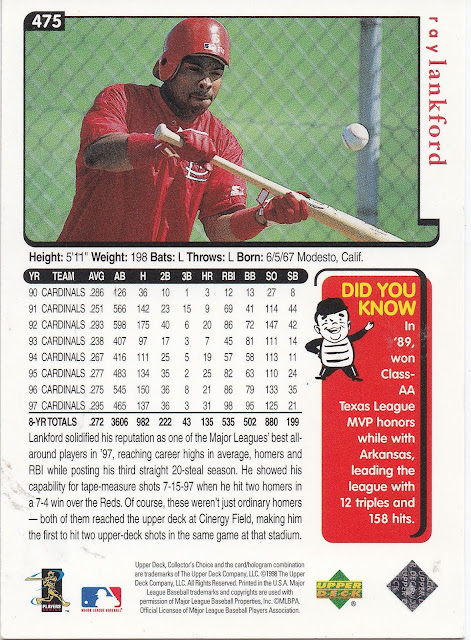 Upper Deck seemed to reuse a lot of facts about players.  I am almost certain that Ray Lankford hitting two upper-deck home runs in Riverfront Stadium and his Texas League MVP are mentioned on at least five other Upper Deck cards.  I guess it's what happens when one company makes 15 different card sets.

Posted by The Snorting Bull at 9:23 PM