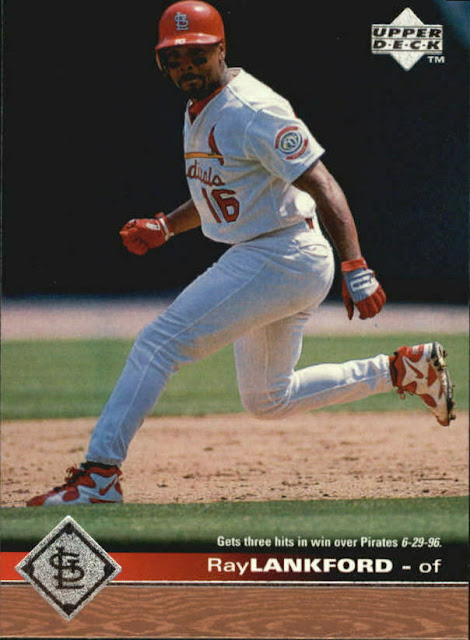 The Upper Deck base sets during the 1990s all had the same sort of vibe and feel.  Photography was always the highlight of this brand.  I like this action photo of Ray running and I also like that Upper Deck put a date and game on the picture.
Looking a little deeper, 1996 was the first year that Busch Stadium had grass since the early days of the stadium.  It was unusual to see a home white Cardinals uniform with a grass playing field in the background. Also note the sleeve patch, which celebrated the 30th Anniversary of the Cardinals move to Busch Stadium. 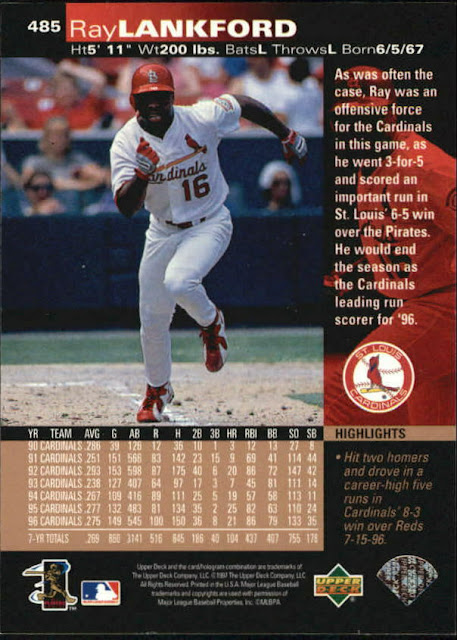 The back of the card has another action shot of Ray running to first base.  I am guessing that this photo is also from the June 29th game against the Pirates.  I found it interesting that the card was talking up a game against the Pirates at the end of June.  While the Cardinals won the National League Central in 1996 and the Pirates finished last, they were actually within four games of each other when this game was played. 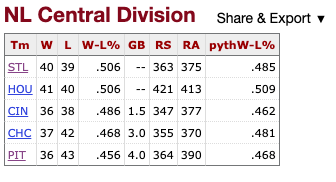 I usually like the card backs with Upper Deck, but in my opinion, this one has a few flaws.  The highlights in the corner seem like a bit of an afterthought.  Why not write more about the game against the Pirates rather than throwing out another highlight from a different game?  It's also squeezed into the corner.
I am also not a huge fan of the gold background with the white print for the stats.  It's not terrible, but why not use the black background with the gold print that was used on the side for the highlight?  Seems to pop a little bit more.
Posted by The Snorting Bull at 6:48 AM