Garry Templeton was one of the best shortstops in the National League during the late 1970s and early 1980s.  The switch-hitting shortstop led the league in triple three straight years, made two All-Star Games, and regularly stole 30 bases.  In 1979, he had 211 hits for the season, which included more than 100 hits from each side of the plate.  I am not sure how often that has been accomplished, but it seemed like a neat factoid to me.

Garry Templeton ended up getting traded to the Padres for Ozzie Smith.  I am certain that few Cardinals fans really miss him.  Yes, it's easy to forget about a player when you get a Hall of Famer in return, but there are other reasons that Templeton is forgettable player around St. Louis. More on that later in the post.

Anyway, my favorite baseball card of Templeton in a Cardinals uniform is his 1981 Kellogg's card. 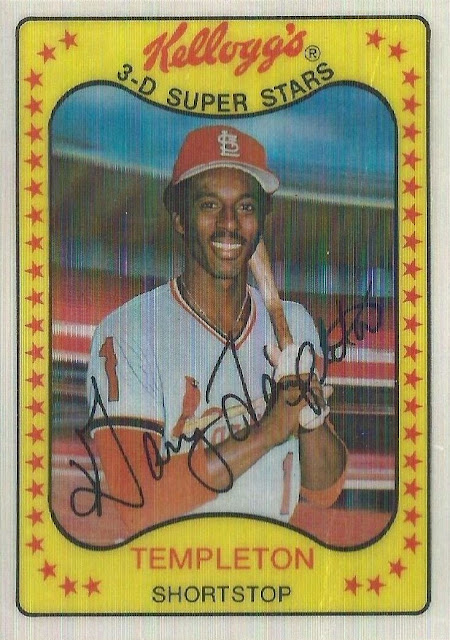 The yellow borders have grown on me over the years.  I picked up a few Kellogg's cards at some point 15 years ago, but I always skipped this year due to those borders.  I think that the stars around the edges also busy up the card.  Again, it's grown on me.  I like the Kellogg's logo at the top of the card and the funky shape around the picture.

I used to always think that the picture was in Busch Stadium, but I spent some time looking at this picture a bit closer last week and changed my mind.  Pictures on cards taken inside of 1980s and 1990s Busch Stadium are always a good selling point for me. Yes, there are red seats and there are openings around the top, but Templeton is wearing a red blue uniform.  The middle deck also looks like it has seats, whereas Busch Stadium had a restaurant with glass windows.

My guess is that the picture on the card was actually taken in Riverfront Stadium.  This photo is from the 1990s, but you can see the openings around the top of the stadium and the middle deck was a seating area. 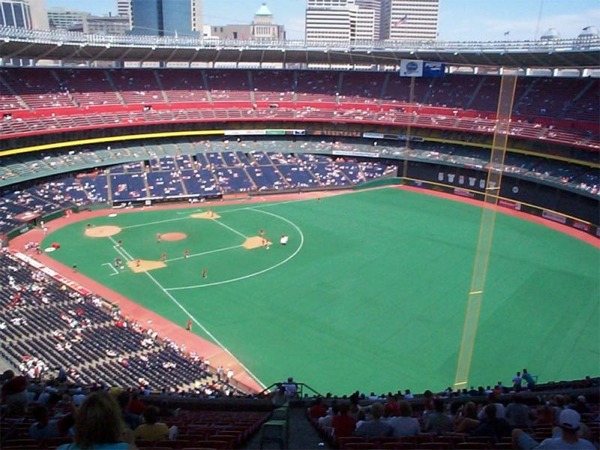 I still like the picture regardless of the stadium. 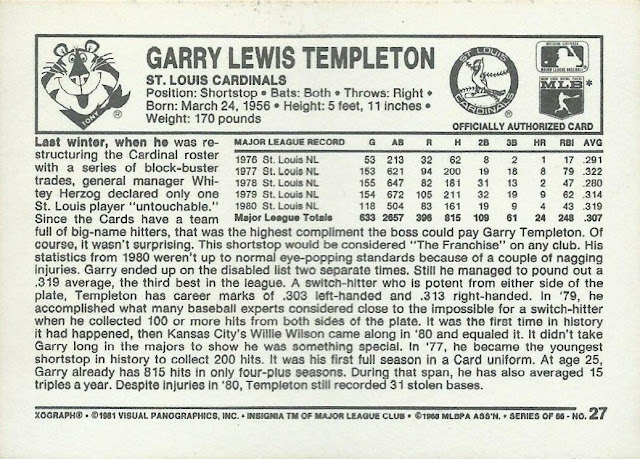 I like the Tony The Tiger logo up in the top corner.  The backs of the Kellogg's cards are always way too crowded for my taste.  There is so much information here.  The main thing that stands out for me is "The Franchise" line about half way down the back.  Templeton was likely viewed as "The Franchise" during this time, but he had a little run in with the crowd at Busch Stadium one afternoon while playing the Giants.

From the St. Louis Post-Dispatch:

"Templeton, playing on a sore knee, struck out on Gary Lavelle's curveball in the dirt. The ball momentarily escaped catcher Milt May, perhaps unbeknownst to Templeton, who failed to run to first base. Fans booed and Templeton answered with a one-finger salute."

This picture of Templeton getting pulled into the dugout by Whitey Herzog is sort of a classic with Cardinals fans. 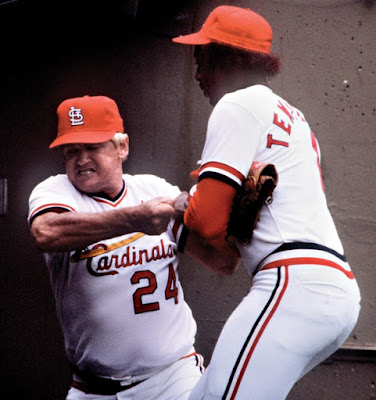 Is he supposed to be Pagliacci the clown?
Posted by The Snorting Bull at 7:48 PM