Where Have You Gone Sam Perkins? Our Lonely Nation Turns Its Eyes To You.

I have been posting some old Skybox NBA basketball cards here for the past month.  Something a little different just to mix it up.  I did not post any cards last week, and I am not going to post any this week either.  Why?  It's a long story, and at the end I am posting a baseball card.

I have two children.  My son just turned 10 on Wednesday, my daughter is 3, turning 4 later in the summer.  They are completely different kids with completely different personalities.  When my son was younger, he generally left my cards alone and did not touch them.  As he has gotten older and taken an interest in them, he has no problem going in my card closet and taking out a box to look through. He puts the cards back in the box and the box back in the closet.  No problems.

The youngest is a different story. 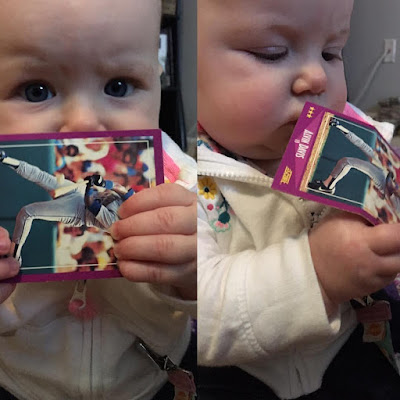 Since the moment she was mobile, cards have been fair game.

We have lost a few along the way, the best card being a Jose Cruz Sr. autograph that was bent in half and scribbled on.  I have been saved numerous times by top loaders, one touches, and boxes that she was unable to get open.  She still has her moments.  Most recently, she used a stack of my boxes to build some sort of tower.  I picked up most of the boxes, but I have two that are missing.

Where are they?  She forgot, but she did put them away.   Somewhere.
One of the missing boxes is my Skybox basketball card set.  I was really looking forward to this week's post too.  It was a lot of Dallas Mavericks cards, including Sam Perkins.  He jumped an inch off the ground to shoot the ball.  Not quite an old school set shot, but really close. 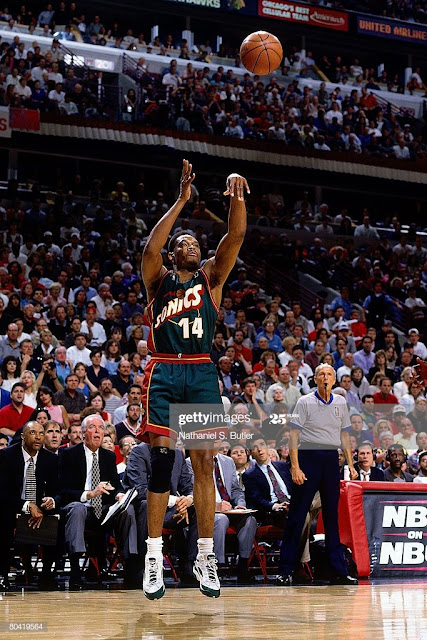 So, one day in the near future I will stumble across my box of basketball cards and post some more of that Skybox set.  I am sure they are still in my house, just a matter of where.  At least, that's what I am hoping.  Maybe next week.
In the meantime, since I cannot give you a Sam Perkins card, I will have to post a new baseball card.  I actually just got a new Project 2020 card.  They are suddenly cheap.
Never saw that coming.  Eye roll.
I have been sticking with the Gibson cards.  This is my latest one.... 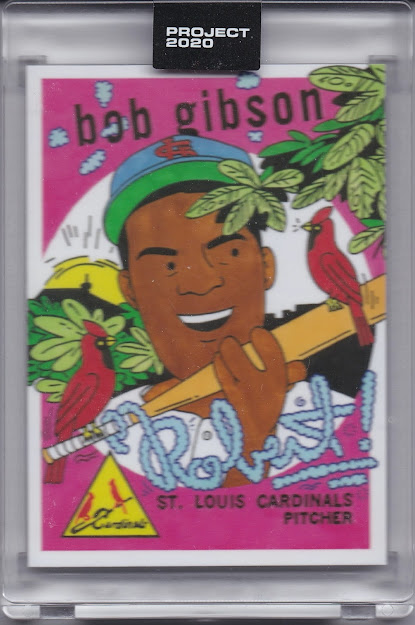 The artist for this card is Ermsy.  He always has the little clouds/bubbles on his artwork.  I liked the play on the Birds on the Bat with the "Robert" going in place of the word "Cardinals".  He still kept the pink frame around the card, the old Cardinals logo in the bottom, and the picture of Gibson in the middle.
Considering they are selling for less than what Topps sold them for originally, why not. 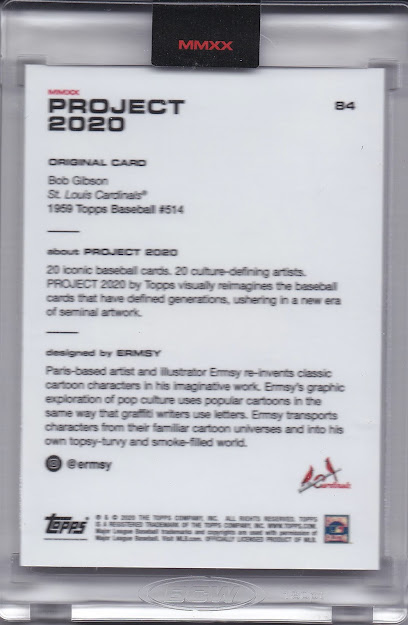 The artist bio is on the back.  Yes, Ermsy does work with popular cartoons.  No, you should not look at his art on your work computer, or in front of your kids.
Let's go find that box of basketball cards.
Posted by The Snorting Bull at 11:11 AM