Ozzie Smith is in the Hall of Fame because of his great defense. Rightfully, there are a ton of cards that highlight his Gold Gloves and acrobatics in the field. However, there does seem to be one offensive highlight that appears on Ozzie's cards almost on an annual basis. One of the greatest Postseason home runs in the history of the Cardinals franchise.
Great call by the late, great Jack Buck too.
In sorting out some cards the other week, I noticed that I had not really done much with the Cardinals Hall of Famers this year. Last year, I found a Bob Gibson rookie card. I didn't need anything that big, but it does not quite seem like a full year of collecting baseball cards without a good card of Stan Musial, Gibson, Lou Brock, or Ozzie Smith. I went ahead and found my good Cardinals card last week. 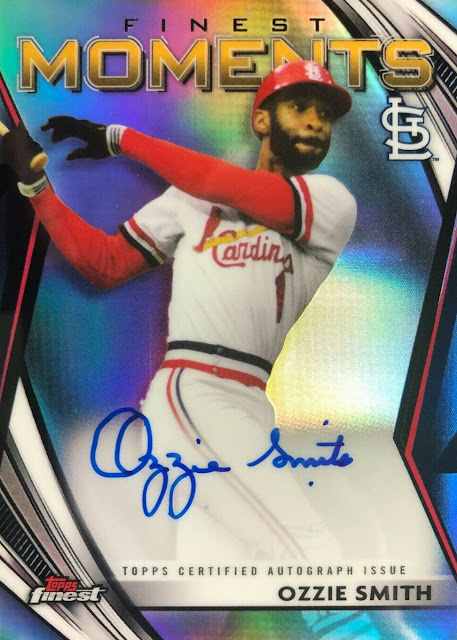 I love the picture on the front of this card.  It's what caught my attention. Every Cardinals fan knows this picture of Ozzie batting left-handed in a 1980s Cardinals polyester uniform. It is indeed a "Finest Moment".
I was also impressed with the back of the card. 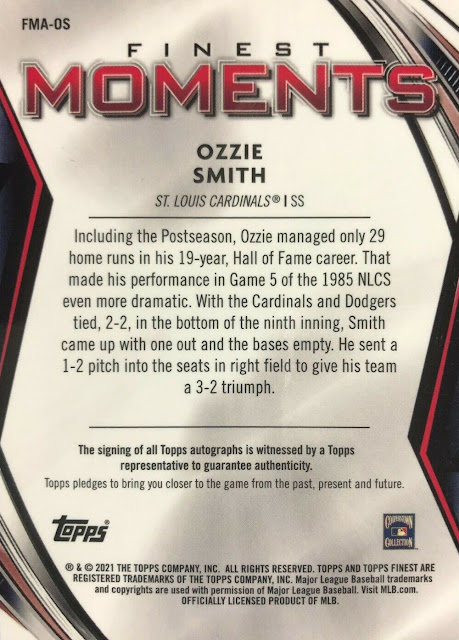 Topps usually skimps on the back of the card. They actually did a little bit of research and a decent write up here. They left out the fact that it was Ozzie's first home run as a left-handed batter during his career.  Ozzie was a switch-hitter. However, the first sentence bringing up his whopping career home run total of 29 did a good job of giving the reader of how rarely Ozzie hit a home run.
Posted by The Snorting Bull at 8:46 AM