A Story About Two Docs

Just a quick simple post to share a few thoughts about Roy Halladay.  A pair of cards too.  I am not a Blue Jays fan, nor a Phillies fan, but I have a decent collection of his cards.  Most of my cards of Halladay were bought, or traded for a few years back, but I still enjoyed looking at them whenever I run across one of them.  One of my all-time favorite baseball games is Game 5 of the 2011 National League Division Series, which was a pitcher's duel between Chris Carpenter and Halladay.

Halladay came up short by a run, the Cardinals went on to win the World Series, but for me it was one of the best games that Postseason.  Game 6 of the World Series, also known as the David Freese game, was probably the only one that was better....


Most of my initial interest in collecting Roy Halladay cards came from collecting former Cardinals All-Star pitcher Chris Carpenter.  I generally don't look at a new Cardinals player's cards and think about collecting their former teammates, but Carpenter's first Cardinals card coincided with a marked up in Halladay's on field performance.

Carpenter signed with the Cardinals in 2002 and first appeared in the Topps Total mega-set that summer.  Roy Halladay won 19 games that year for the Blue Jays and was a contender for the American League Cy Young Award.

After picking up a few Carpenter cards, I dabbled in a few Halladay cards.  Especially given the fact that they seemed inexpensive when you considered his pitching talent.  This 1997 Bowman Autograph was the first really nice card I ever bought of Roy Halladay..... 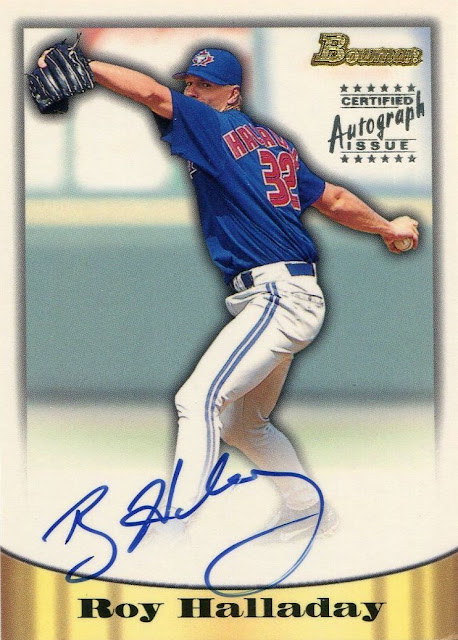 I remember where it came from and why I bought it.  It came from 1,000,000 Baseball Cards in St. Louis County, Ballwin/Manchester area, and it was in a new card display that shop owner had set up on a wall in between the cash register and the front door of the store.  It's probably about a 10 to 15 foot section of wall.

When I first started shopping at 1,000,000 Baseball Cards I believe the area originally housed Beckett Price Guides.  The day that I bought this Halladay autograph the space had been converted to hold autographed and relic cards.  The owner explained to me that the cards in the space were players he considered to be excellent, yet under appreciated in the hobby.  I picked up this Halladay and a copy of a Brian Giles autograph.  I don't remember exactly how much I spent on the two cards, but it was not much.

I have picked up a few other nice Halladay cards over the years including another autograph or two.  The only other Halladay in card collection that really has a story behind it is a 2011 Topps Marquee card that I picked up in a case break. 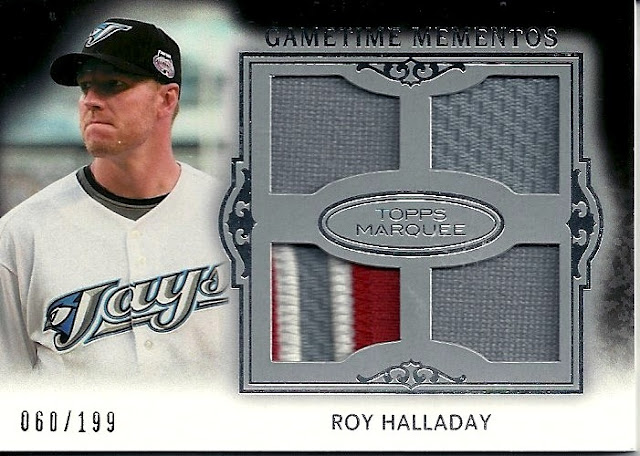 I don't usually do case breaks, but I bought into one to help out a friend who was trying to get into that business.  I bought the Cardinals, but I also got a random team which ended up being the Padres.  I ended up with a Colby Rasmus autograph, a jumbo Adam Wainwright jersey swatch, and a Heath Bell autograph.

After all the dust settled, the collector with the Phillies was a little bit disappointed by this card.  Blue Jays picture, Phillies swatch.  I have a few cards with mismatched patches and pictures in my collection.  Never minded this sort of things, so I made a trade for this card.

At the time it was just sort of an interesting card.  I guess it's something a little more now.
Posted by The Snorting Bull at 9:00 PM