The 1982 Topps Cardinals cards were my very first team set.  My parents bought me the cards at a flea market in Pennsylvania at some point either in 1983 or 1984.  I still have all the original cards.  I should have pulled out the Sutter from the set and used it for this post.  You can tell that it was owned by a 6 or 7 year old.  Some might consider the card in "poor condition", but it was well loved for many years.

I ended up re-collecting the majority of sets from my childhood, including the 1982 set, but still have all the old early 1980s cards hanging out around my card closet.

The Bruce Sutter card always stood out to me because of that beard.  There were not too many 1980s players who had that much facial hair.  I cannot really think of another off the top of my head? Currently, we have players like Charlie Blackmon and Dallas Keuchel who have large amounts of facial hair, but it feels like this was a little less common look in the 1980s.  Mustaches would be a different story.... 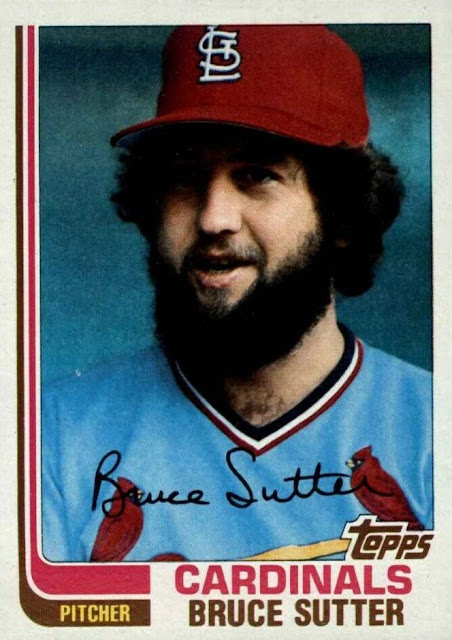 Also some bonus points go for Sutter having the powder blue Cardinals uniform on in this card.  I think almost all of the 1982 Cardinals cards have pictures that were taken at Wrigley or Shea Stadium, with a few Spring Training photos mixed into the bunch.  The wall behind Sutter does not offer much of a clue. 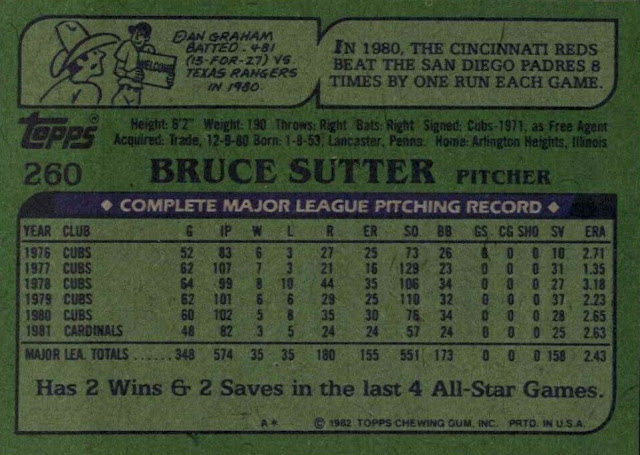 Let's work our way down the card.

The fact boxes on the back of some of the 1982 Topps cards are puzzling.  One box is about Dan Graham, he played for the Orioles, hitting against the Texas Rangers in 1980.  The other is about the San Diego Padres playing the Cincinnati Reds in 1980.  Sir, this is a Bruce Sutter card.  We get one Bruce Sutter fact under the stat box, but two non-Bruce Sutter facts at the top?

This card was in the middle of Sutter's career as far as time goes, he played until 1988, but he was not very good after the 1984 season.  His last year or two with the Cubs, first few seasons as a Cardinal were his peak years, with 1984 being his best season.  The thing I notice most about the stat line is the fact that the innings pitched and the games are not identical.  Sutter was a great closer, but often came into the game before the ninth inning.

I went and looked up a few of the Cardinals closers for the past few seasons.  Last year, Carlos Martinez closed games for the Cardinals.  He pitched in 48 games, and 48 1/3 innings.  In 2018, the Cardinals used Bud Norris, who pitched in fewer innings than the number of games in which he appeared.  I have a hard time believing that we will ever see a closer again who pitches two and three innings at a time again outside of the Postseason.
Sutter is also a Hall of Famer, and shown as a Cardinal on his plaque. 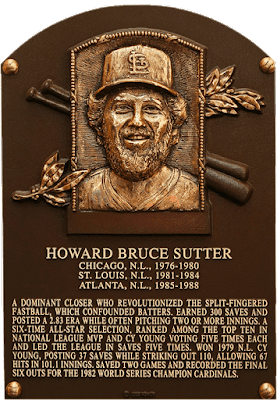 I think of all the modern Cardinal Hall of Famers he is probably the player I have written about the least on here.  Maybe a few more Sutter posts in the future.
Posted by The Snorting Bull at 10:25 AM