Baseball Card To Be Named Later

I love when players get traded to the Cardinals, and instead of running to Ebay or COMC to find cards of the new player, I run to a box of cards.  Sure, I post cards here, but I do not take the time to scan or post all of them.  Actually, if my mailbox would scan the cards when they got delivered, I would probably post them all.  That's for a different day though.

The trade sent Randy Arozarena and Jose Martinez to the Rays for pitcher Matthew Libertore, and a Minor League catcher.


We have acquired LHP Matthew Liberatore and C Edgardo Rodriguez from Tampa Bay in exchange for OF José Martínez and OF Randy Arozarena.


First, I will miss Randy Arozarena's Instgram Stories from the Cardinals locker room.  I will also miss Jose Martinez, because he was one of the few Cardinals with any personality.

I made a mad dash for the autographed card boxes just minutes after the trade was announced.  I actually picked up a pair of Libertore autographs after has was drafted by the Rays.  I figure that their high draft picks are likely to end up on the Bulls, so I am saving myself some trouble.  Plus, if they are a college player, maybe there is a chance that I have seen them play.

Libertore was a high school kid, so no college cards.  Here's what I did have in my autographed cards box of the new Cardinals prospect. 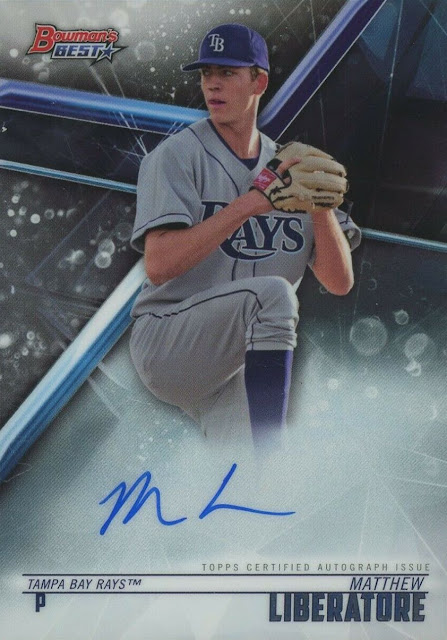 I got this 2018 Bowman's Best autograph of Libertore.  It is one of his cheapest autographs, which is exactly why I bought it.  I think he was on the Princeton Rays at the time, which is Rookie League.  I was also hoping that maybe over time his autograph might evolve into something different.

Probably not, but we can hope.

I did end up with a copy of his Bowman Chrome autograph.  A little bit nicer than his Bowman's Best, and a little more expensive. 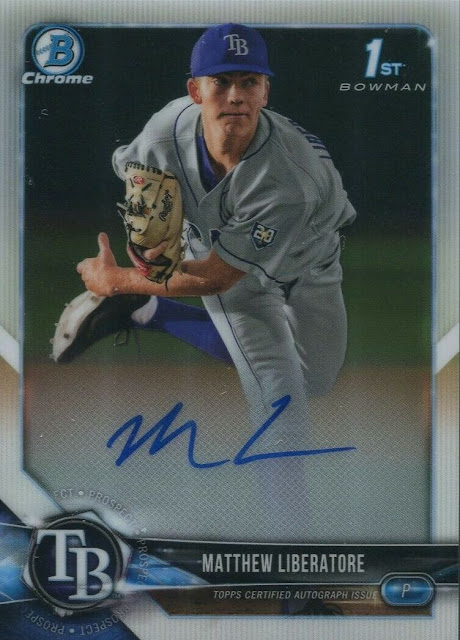 However, I managed to find a copy of this card last year during the offseason, and it was not too bad to buy this card.  I will go ahead and file these away, hopefully he will be pitching at Busch Stadium in the not too distant future.

In that case, I will post some Nolan Arenado cards.
Posted by The Snorting Bull at 1:17 PM