Who is the most average player who played for your rooting interest?

As a Cardinals fan, I would vote for Todd Zeile.

Todd Zeile was a really average player.  He was extraordinary at being ordinary.

He was supposed to be a really good player, rated as high as the number 7 overall prospect by Baseball America prior to the 1990 season.  The team thought so much of Zeile that they let their starting catcher Tony Pena walk at the end of his contract so that he could have the starting job.

Zeile would go on to play for 11 different teams over 16 seasons, but for seven of those years he appeared in a Cardinals uniform.  As a Cardinal, he never hit 20 home runs, drove in 100 runs only one time, and only twice had a slugging percentage over .450 and an OPS over .800.  The Cardinals moved Zeile's position on two different occasions to make room for other players who were considered better than him.

Still, he was a Cardinal, and one of the few who played a significant number of games during the 1990s who did not have a certified autograph.  Welp, he finally signed a few cards for Topps, and I bought one last week.

Not a new product, but the Buy It Nows for some of the Zeile cards on Ebay were upwards of $30.  For Todd Zeile?  No thank you.  I also whiffed on a few auctions, but finally ended up with one for less than $10 shipped.

It's an above average effort on the part of Topps too. 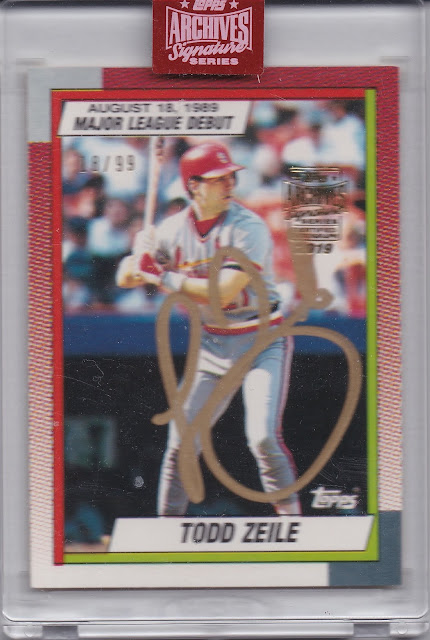 I specifically targeted this card since this is an autographed rookie card.  This card is from the 1990 Topps Major League Debut set.  This was actually a small box set.  Zeile had a short shelf life as an interesting player in my card collection in the early 1990s.  He quickly went from can't miss prospect to scapegoat in a short time.  I collected his 1989 and 1990 cards, but I was done at some point in 1991 or 1992.

I also love that Topps, or perhaps it was Todd Zeile, used the gold colored ink on the card.  The dark colored dugout in the background would not hidden a blue or black ink signature.  Well done. 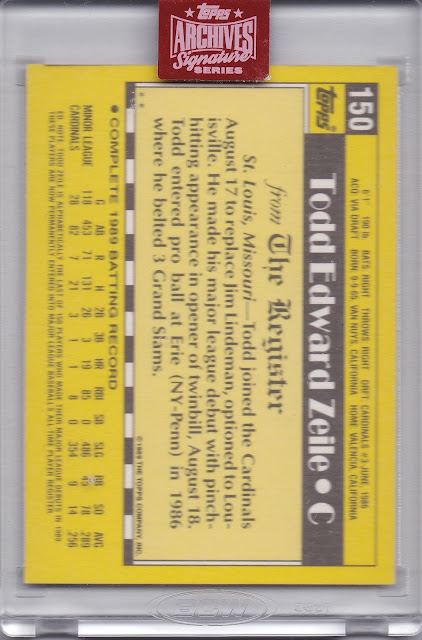 Nothing great about the back of the cards.  I always thought that the fake newspaper clippings on this card were not the best way to share out information about the players in this set.  What is "The Register" exactly?  At least give me a real newspaper.
Posted by The Snorting Bull at 9:17 PM