It has been really hard to find the motivation to write during the last week.  I do not have a job where I normally sit very much, nor do I spend much time looking at screens. After a long normal day of not sitting in front of a computer screen, ten to fifteen minutes to talk about baseball cards is the perfect way to unwind.  With my school going to distance learning, I am spending a lot of time on my computer, and often just want to walk away by the middle of the afternoon.

I hope everyone is healthy, and finding plenty to do while they are at home.  On with the baseball cards.  I really like this one. 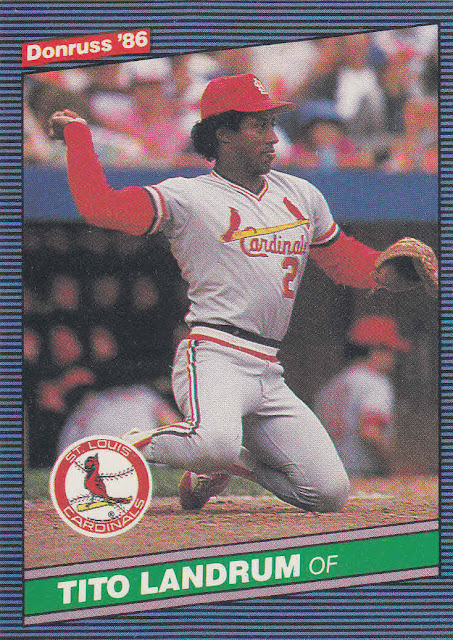 Tito Landrum was not really that good of a player, but he was still a favorite with Cardinals fans during the 1980s.  He was mainly a right handed bat off the bench, and the Cardinals started him against left handed pitchers during the early parts of Andy Van Slyke's career.  He did not have any power, only 13 career home runs over 9 years in the Majors, and did not have much speed either.  Tito only stole 17 bases in his entire career.  That's a really low number for a 1980s Cardinals player.

Tito's claim to fame actually came after he was traded away to the Orioles in 1983.  He hit the series clinching home run in the American League Championship Series against the White Sox.

He was later traded back to the Cardinals.

Why do I love this card?  It's pretty cool to see a regular position power doing a little catching.  Always makes for a good card.  Fleer made a really good card of Brian Jordan wearing catcher gear for the Ultra set in 1998. 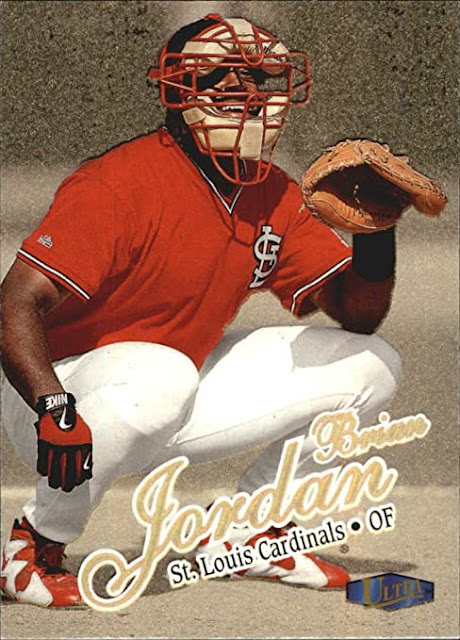 I like the Jordan card better than the Landrum card for obvious reasons.  Still, it's kind of neat to see Tito out behind the plate catching warm-up pitches in between innings. 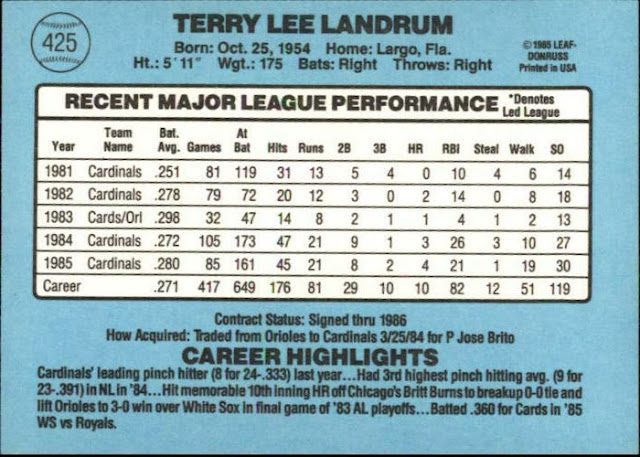 Terry Lee Landrum.  I love how the old Donruss cards used to have the players full name on the back of the card.  You can also see his blah stat line on the back, and mention of the home run for the Orioles against the White Sox during the ALCS in 1983.
Posted by The Snorting Bull at 6:31 PM