Every team makes a few poor decisions along the way, as fans we just hope they are short lived, and not too painful.  Bob Horner checked all of those boxes.  The Cardinals should have never signed him, but the team also got rid of him after one season.  In fact, he did not appear in a game for the team after June, and was replaced at first base when the team traded for Pedro Guerrero.

We got a few baseball cards of Bob Horner in a Cardinals uniform as an added bonus.  A bunch of them were made in 1989, the year after he was a Cardinal, but a few card companies managed to squeeze him into their 1988 sets.

The Topps Traded set was one of two Topps sets that year with a Horner card. 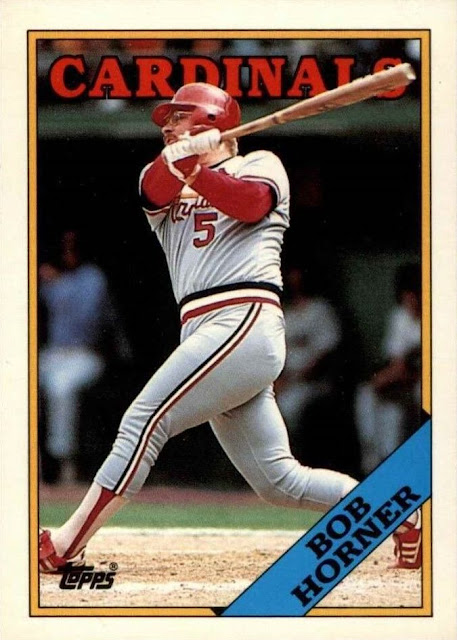 Horner was out of shape by the time he joined the Cardinals, and not a very good player.  The card does a pretty good job of hiding the fact that Horner was a little pudgy and not very good as a player during his brief tenure with the Cardinals.  He only hit 3 home runs in 200 at bats in St. Louis.  I tried to track down a highlight of Horner wearing a Cardinals uniform, and the best I could come up with was him getting out of the way while Vince Coleman is stealing home.

That's it.  Bob Horner as a Cardinal.  Here is the back of the card. 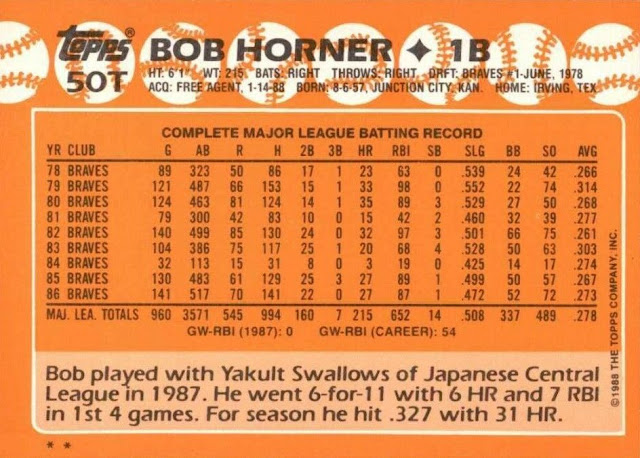 Posted by The Snorting Bull at 6:10 AM