When I last left you, I was telling all about all the cheap Durham Bulls cards that I found over the summer.  Lots of old players from the 70s, 80s, and 90s, but there were also a few more recent players mixed in as well.  Tonight, I thought I'd share a few cards of two players who were on the Bulls roughly 10-15 years ago.

First, one quick card from 2020.  Also a former Durham Bulls player, which is why I am putting this card in the post. 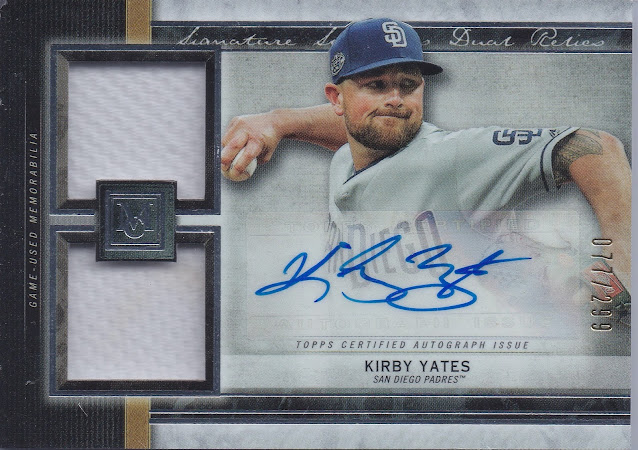 Another Kirby Yates card.  I believe he was in another one of the four posts that I made in the past week.  Some of these Topps brands are really running together these days in terms of appearance and design.  Card from an expensive box with a sticker autograph. 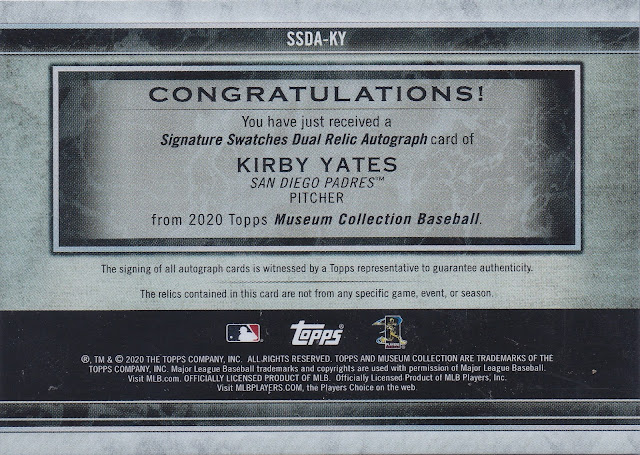 Someone was probably really irked that they spent $300 and they walked away with a Kirby Yates card that I bought for $7.99 on Ebay.

Onto some older players from the Durham Bulls.

First up is Elijah Dukes.  Don't go look him up.  There is nothing there that you want to see.  I was excited to find these cards this summer.  Here is my quick run down on Elijah.

The first year I lived in Durham for baseball season was 2006.  I actually moved to North Carolina in 2005, but missed out on baseball season.  The 2006 Bulls team was loaded was talent.  You might know Delmon Young, B.J. Upton, Ben Zobrist, Jason Hammel, Edwin Jackson, and James Shields.  The International League MVP Kevin Witt was also on the team.  Elijah Dukes was just as good as anyone else in that group.  Baseball America considered him a Top 100 Prospect.

He was fast and could hit for power.  A star football player in high school who was learning to play baseball, and did some pretty incredible stuff at times.

Elijah had some off the field issues and was eventually traded to the Nationals.  In Washington, he ran himself out of the league with a bunch of other off the field incidents.  Sadly, Elijah is still fighting the war so to speak.

I still remember him as a tremendous talent.  I loved collecting his cards the first year or two he was in the league, and found two this summer that I did not own. 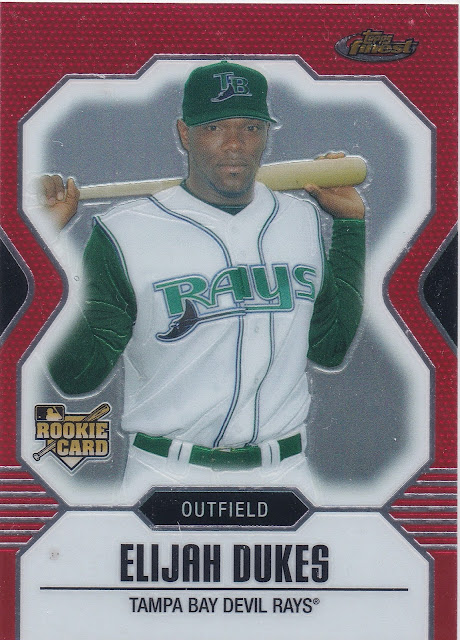 This is a Finest Rookie Redemption card.  Always a nice group of prospects included in these cards, sometimes they do not pan out though.   The 2007 was hit or miss.  Ryan Braun, Justin Upton, and Tim Lincecum are in there.  So are Elijah Dukes and Akinori Iwamura. 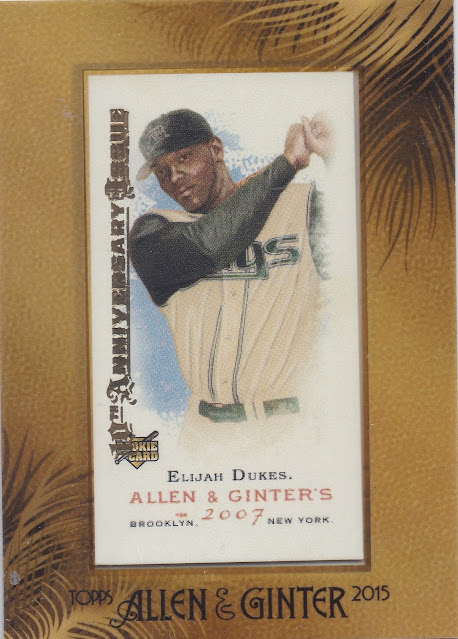 Last Elijah Dukes card is from the 10th Anniversary set of Allen & Ginter that came out in 2015.  There were buybacks of old cards that were stamped with the words "10th Anniversary Issue".  Nice looking cards.  I found a copy of Elijah's 2007 rookie. 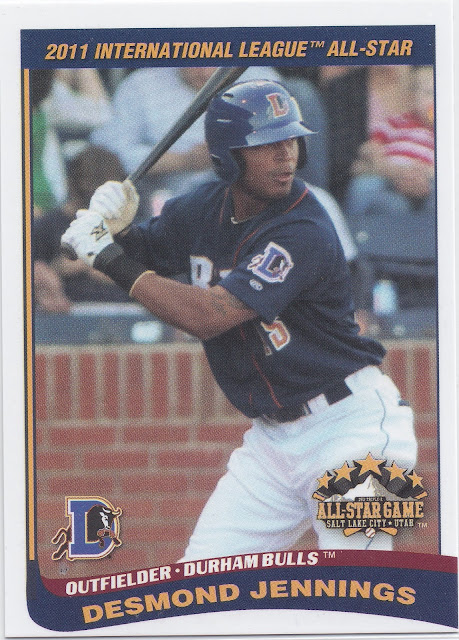 Desmond Jennings was a Top 20 prospect.  He was a great Triple A player, solid Major League player.  In the Minors he walked almost as much as he struck out, and never more than 80 Ks in a Minor League season.  While he was playing on the Rays, he struck out more than 100 times every full season in the Majors, and only walked more than 50 times once.
Sometimes players don't work out they way you think.  Injuries finished off his career.
I enjoyed his time in Durham, collecting his cards, and was missing this card from the 2011 Triple A All-Star Game.  It took place in Salt Lake City.  Probably why I did not get the set. 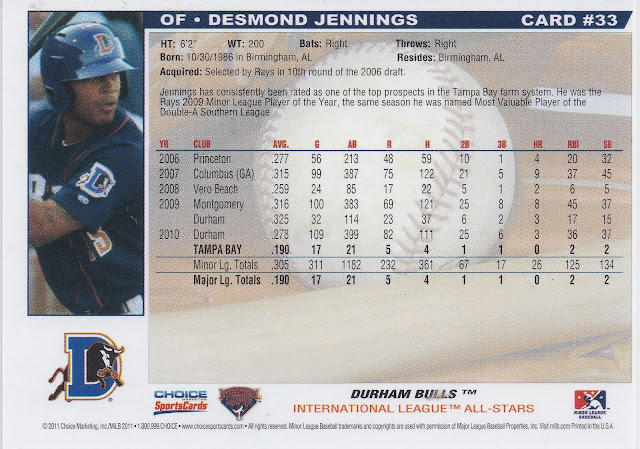 I love the back of this card.  You don't get many Minor League cards with colored backs.
Last card, same picture as the previous one. 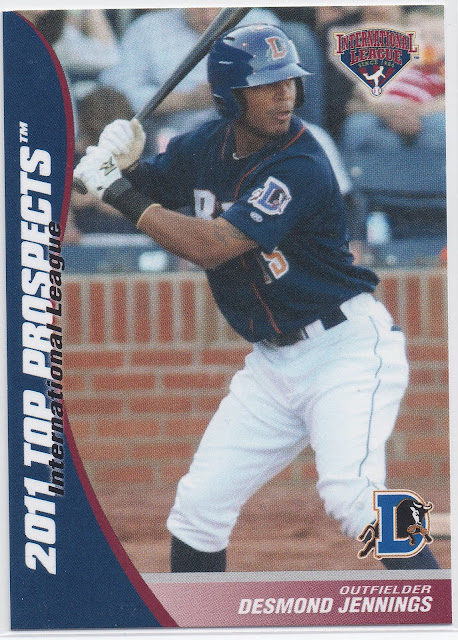 This is from the International League Top Prospects set.  Same card manufacturer as the card above.  Guess they saved some money on pictures.  That red striped shirt in the background makes it really obvious. 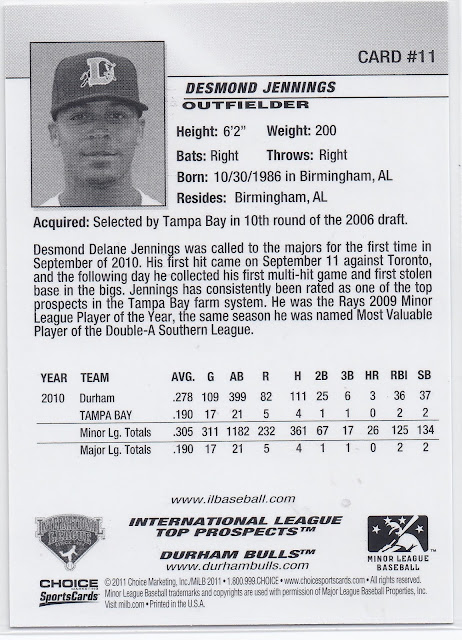 Nice little write up on the back of the card about Desmond Jennings.
Maybe the Durham Bulls players from the 1960s and 1970s in my next post.
Posted by The Snorting Bull at 9:02 PM