Upper Deck came out in 1989 with foil packaging and glossy cards.  I was still on Topps, Donruss, and Fleer.  I dabbled with Upper Deck during the early 1990s, but really did not appreciate the brand until the mid 1990s.  Maybe even later than that.  At a $1 per pack, it cut down on the quantity of cards that I could buy if I stuck with my usual brands.

I was in middle school when the Upper Deck card craze kicked in.  The two most important things in my life at the time were baseball cards, and pick up basketball games.  There were plenty of neighborhood kids with Ken Griffey Jr. Upper Deck cards, and all it would cost me was a large stack of all the other rookie cards that I cared about.  Barry Bonds, Will Clark, Tony Gwynn, Barry Larkin, Ryne Sandberg, Eric Davis, Darryl Strawberry, and Greg Maddux all probably would have left my collection if I had traded for a Griffey rookie.

To me, at the point in my life, Ken Griffey Jr. was a flashy player on SportsCenter.

All of those players listed above, I actually got to watch them in person.  They played against the Cardinals.  They had some sort of meaning outside of being a player with highlights on television.  Although, truth be told, I was the only kid in my neighborhood who had actually seen Ken Griffey Jr. in person.


The full box score is here.  This was on vacation.  The bottom of the box score says the weather conditions at the time of the game were unknown.  It was hotter than hot, and the Rangers had metal bleachers in their stadium.  Back to the card.

I did not trade for an Upper Deck Ken Griffey Jr. rookie card.

For years, the most important Ken Griffey Jr. rookie card in my collection was his 1990 Topps card.  I still love this card, and was more than happy with this being best Griffey card. 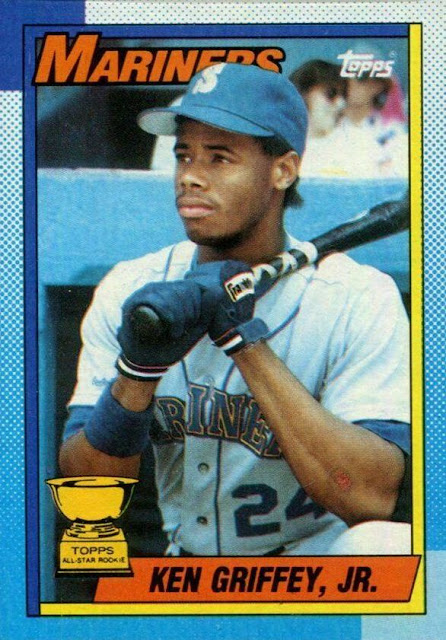 Fast forward about 15 years into the future.  There was a brief window during my life when I did not teach.  It was something along the lines of six months.  I left St. Louis, moved to a small town in southeast Missouri, worked a job or two including managing meeting and convention space for a hotel and restaurant holding company.  I took some historical preservation classes on the side.  More into old buildings than old paintings. 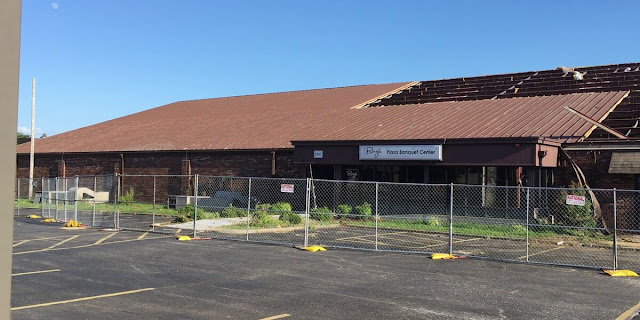 This had really large rooms inside.  Large weddings, large corporate meetings, things with multiple hundreds of people showing up at an event.  I also had an office inside of the building, along with the office staff that actually worked on selling the dates for the meeting rooms.  There were really busy days with lots of meetings and things to set up, and other days where you were just hanging out.  You know, managing stuff.

One of the slower days, the office staff decided to clean out a box of random items that had been left behind at weddings and meetings.  All sorts of odds and ends.  Umbrellas, flasks, clipboards, mini bottles of liquor, notebooks, fountain pens, keys, centerpieces, candles, and one baseball card complete with a massive screw down holder.

The card was a 1989 Upper Deck Ken Griffey Jr. rookie card.  It was in great condition.

Front of the card.  So iconic. 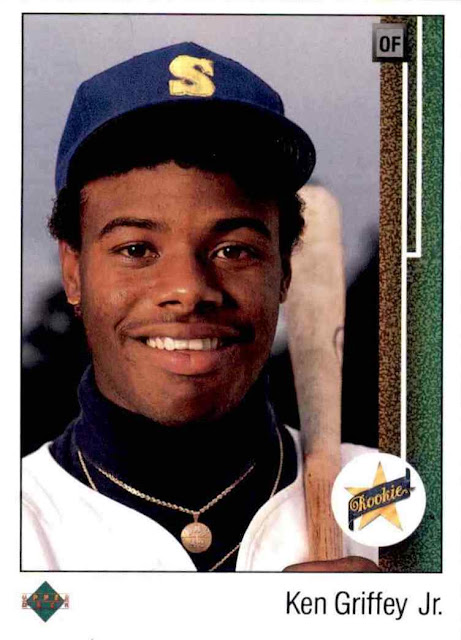 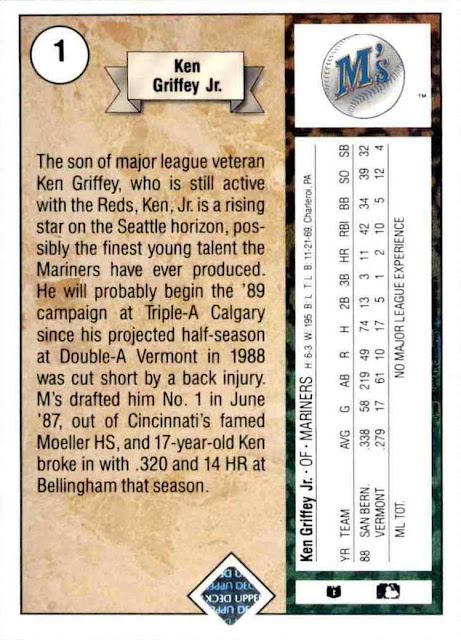 Man, I loved that job.  It took me 15 years to find a copy of this card, but I landed one for nothing.  Actually, I was not really looking for it when I found it.

I ended up getting a teach job that I was not really looking for a few weeks later.  There is a good parallel to the card.  I packed up my stuff and moved to North Carolina.  Long story how that happened.   Anyway, I love this card, because it reminds me of the brief time I was not a teacher.  Not for long, but I had a good time working in the business world.
Posted by The Snorting Bull at 8:39 PM