Discount retailer Ames teamed up with Topps in 1989 to offer a small set of cards featuring players who had reached 20 home runs and 20 steals in a season.  No doubt a likely follow up to the Jose Canseco 40/40 season that took place in 1988.  We were still five years away from Carlos Martinez hitting a home run off the top of Jose's head.....

People were still taking him seriously at this point.

There are plenty of not so surprising names in this small box set like Andre Dawson, Kirby Puckett, Eric Davis, Dale Murphy, and plenty of others.  I was actually a little surprised that Pedro Guerrero ever stole 20 bases.  I remember him being a good player on the Dodgers, but not really a base runner.

My greatest Pedro Guerrero memory on the Dodgers is him throwing his glove, he was playing left field, when Jack Clark hit his home run at the end of Game 6 in the 1985 National League Championship Series.

Yes, after checking the stat sheet, also the back of the card, I can tell you that Pedro Guerrero did steal bases at one point during his career.  Obviously prior to being traded to the Cardinals.

Here is the front of the card. 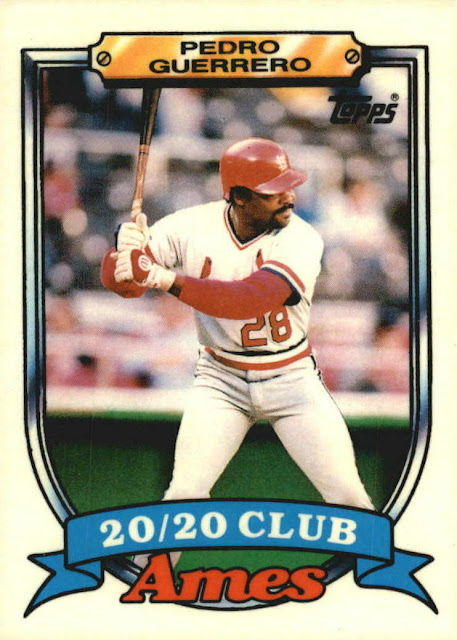 It's a decent design for something that was sold exclusively at a discount retailer.  I don't love the Ames logo going across the bottom, sort of the weak point of the card design here, but I understand why it is there.

The back of the card confirms that Pedro once had wheels. 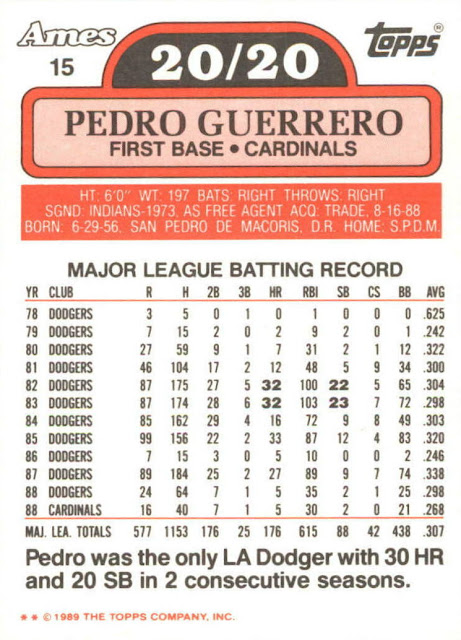 I like that they highlighted the years he went 20/20 and the little factoid down at the bottom of the card.  I feel like this card could use a baseball card cartoon in the worst way, but those were out of fashion in the late 1980s.  Good little set if you are looking for something fun with some good names from the 1980s.

Posted by The Snorting Bull at 7:06 PM